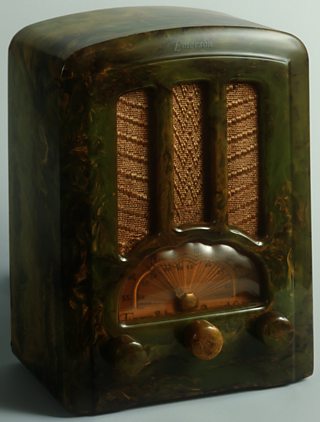 The Wireless Set takes place in the fictional valley of Tronvik, Orkney in 1939. Like most of Brown’s settings, Tronvik is isolated, both in terms of location and from mainstream society.

Hugh and Betsy’s son Howie returns to Tronvik after working all winter as a whaler in the Antarctic. With his new-found wealth, Howie brings home a number of gifts, including a wireless set. It is the first the valley had ever seen.

The community gathers at Hugh and Betsy’s croft and some are amazed by the wireless set:

They all stood staring at it, making small noises of wonderment, like pigeons.

Others are more skeptical. This doubt grows when the radio gives false information. Betsy says of the radio broadcasters:

It’s hard to know sometimes whether what they say is truth or lies.

A few months later, World War Two breaks out. Howie and three other men from the island dutifully sign up and go to war.

That winter, the inhabitants of Tronvik gather round the wireless for information. One evening, the wireless announces that the ship the Ark Royal has been sunk in the Mediterranean, but the characters believe the ship is anchored in Orkney. This adds to their distrust of the wireless.

The inhabitants of Tronvik become captivated by the propagandist radio broadcaster Lord Haw-Haw:

The people would rather listen to him than anyone, he was such a great liar.

However, one evening, after more lies from Lord Haw-Haw, they decide to switch off the wireless and the characters socialize long into the night.

One afternoon, while Betsy listens to music on the wireless, the postman delivers a telegram. Howie had been killed. The missionary tries to come to Betsy’s aid, but Betsy absently speaks to her husband (Old Hugh) about daily tasks.

Old Hugh responds calmly at first, before smashing the wireless set with an axe, leaving it a tangled wreck. The story ends with Betsy and Hugh discussing their daily chores, ignoring the topic of Howie’s death.