Political turmoil in the 1840s 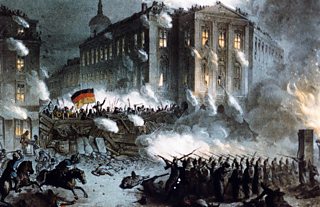 The 1948 revolution in Berlin

Throughout the 1840s many German states were under pressure from nationalist and liberal demonstrators who wanted greater political representation and reform.

German monarchs, such as Prussia's King Frederick William IV, feared they would lose power and influence if German states were united.

However, in 1847, the Prussian king was forced to call a United Diet of the Prussian Estates to help him solve the financing of a new railway. The Diet demanded a written constitution and free elections, as well as a united German Parliament. The Diet was dissolved as a result.

In early 1848, revolution spread across Europe. In France, the monarchy was overthrown, and in Austria, Chancellor Metternich was forced to flee.

Much of the discontent came from the lower classes. The growth of industry and towns and cities led to increased organisation and political awareness among workers. They were driven by a desire to end economic hardship and social problems.

There was also a push from the liberals and nationalists for political change. They demanded a Prussian constitution and the creation of a united Germany.

In March, there were demonstrations on the streets of Berlin.

Despite his opposition to popular democracy, this forced Frederick William to: