The crisis over Korea 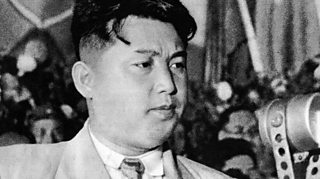 During World War Two, Korea had been occupied by the Japanese. After the defeat of Japan in 1945, the Korean peninsula was divided at the 38th Parallel, in preparation for elections and reunification.

The communist north was led by Kim Il Sung, the non-communist south by Syngman Rhee.

Communism was growing in the Far East and by 1949, the Communists had taken power in China.

The US developed the 'domino theory' - the idea that, if one country fell to communism, others would follow like a row of dominoes. In 1950, a report by the American National Security Council ('NSC68') recommended that the US stop containment and start to roll back communism.

In 1950, with support from Russia and China, Kim Il Sung invaded South Korea. The North Korean People's Army (NKPA) easily defeated the Republic of Korea's army (the ROKs). By September, the NKPA had conquered almost the whole of South Korea.

The US secured a mandate from the UN to take action against North Korean forces. The Russians were boycotting the UN at the time so could not veto this move.

In September, UN troops, led by US General MacArthur, landed in Korea and drove the NKPA back. By October, the UN forces had almost conquered all of North Korea.

The Americans landed more troops and drove the Chinese back to the 38th parallel. The war went on as border clashes until 1953. At this point America's new president, Eisenhower, offered peace, but threatened to use the atomic bomb if China did not accept the offer.

The US realised they could halt the spread of communism using military strength. A new frontline in the Cold War had been drawn in Asia.

This was another area where capitalism and communism met and remains a source of political and economic tension to this day.