All plants and algae need light to photosynthesise. Plants compete for light by growing quickly to reach it and often shade other plants with their leaves. When an old tree in a forest dies and falls to the ground, there is a race to fill in the gap in the canopy. It doesn't look like a race to us because it happens slowly.

Water from the soil

Water is a reactant in photosynthesis and it is essential that plants have a regular supply of water for the process to occur. Some fully grown trees, like the oak tree, lose a staggering 150 litres of water per day, which is used to transport materials through the plant to the leaves. Some plants have roots that are shallow but extend a long way from the tree to maximise the update of water after rainfall. Others have roots that are deep to find stores of underground water.

Minerals from the soil

Plants require minerals for healthy growth. These include nitrates and magnesium. Without sufficient minerals plants suffer deficiency diseases because they cannot grow healthily. Plants that grow in soils with few minerals, such as bogs, have evolved different ways of accessing nitrates. Some, like the Venus flytrap and pitcher plants, have evolved to absorb nitrogen compounds from the insects they trap, enabling them to grow more successfully than their competitors on mineral poor soil.

Plants also require space for healthy growth. This means their leaves are not shaded which maximises photosynthesis. Some gardeners have experimented by planting vegetables very close together. These result in much smaller vegetables being produced.

Competition can be intraspecific, for example competition between oak trees in a forest, or interspecific such as when another species of tree like birch or yew grew next to oak trees. When a woodland tree dies, other younger trees compete to replace it. This competition ensures the growth of the healthiest individuals, and maintains vigour in the population.

Individuals within a species that cannot compete effectively are unlikely to reproduce, and may die. This is known as survival of the fittest and is a driver for evolution. Whole species that are unable to effectively compete many become extinct.

All animals require food which provides them with energy and raw materials to complete life processes. Because of this, competition for food can be fierce. There are many birds that eat insects in our gardens, and some have evolved to only eat certain types of insect to reduce competition from other species. Others like the blue tit and great tit compete with other members of their own species. Because food is so vital, many animals will fight for it. 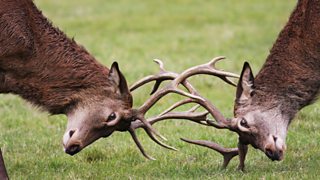 Male deer compete for mates by locking antlers and pushing their opponent. The strongest usually wins.

Animals within a species also compete for mates. This is essential so they can pass on their genes to their offspring. Animals have evolved an innate or natural drive to reproduce, and this competition often results in fights. This is seen each year when animals like red deer group together at the start of the rutting (mating) season. Large male deer fight with each other by locking antlers and pushing hard. In deer, and many others species, these fights competing for mates can often result in serious injury or death, but benefits the population as only the strongest pass on their genes to the next generation.

The territories of animals contain all of the resources and conditions they need to survive. These include abiotic factors such as light, warmth and water, and oxygen for aquatic animals. There are also biotic factors such as food and predators. Many animals, including the cats in back gardens, will fight for territory.