The destructiveness and futility of War

Just as the landscape is scarred by craters, Mackinnon’s nightmares demonstrate the damage inflicted on the human psyche. While Mackinnon has no physical scars, mentally he is plagued by the horrors he has seen.

In contrast, Smith takes an almost matter of fact approach to the events and has found some way to successfully function under these conditions.

The story deals with the death of just one soldier but it can be seen to represent the millions who were slaughtered in the conflict. Crichton Smith emphasises not only the destructiveness of war but also needless loss of life that occurred during these trench raids. 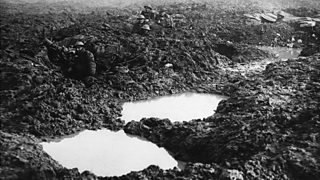 Soldiers crouched at the crater holes

These operations were ordered by distant generals and had very little impact on the outcome of the conflict.

As they required face to face, almost primitive methods of combat in enemy territory, they were every bit as terrifying as any of the battles fought overground.

In Mackinnon and Smith we can see the different ways the human psyche deals with such situations. Smith’s pragmatism contrasts with Mackinnon’s attempts to rationalise his experience. This suggests that the events will have a much longer lasting and more harmful impact on the young officer.

In the end and despite their courageous efforts, Morrison is saved from the crater only to immediately die.

This reinforices the idea that war is futile and life and death are arbitrary. Men are killed or survive through luck or chance. We would have expected that Morrison ought to survive after such a herculean attempt was made to save him, just as we would have expected that walking back across no man’s land in bright starlight would expose the others to almost certain death.

In war then, the usual codes and rules that we live by are subverted, creating a chaotic, terrifying and unfamiliar reality.