There are many points in the novel where the wood appears to have the potential to protect and restore through its beauty and peace. The opening line of the novel is an example of this:

It was a good tree by the sea-loch, with many cones and much sunshine; it was homely too, with rests among its topmost branches as comfortable as chairs. 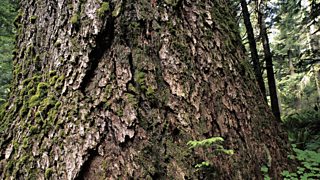 The Cone Gatherers climb a Douglas Fir to collect the cones

The tree the cone-gatherers have chosen to climb is good with much sunshine, which portrays the woods as a benign place. The brothers are sheltered in their homely tree, where branches are like chairs as if nature is providing for them.

Later again we see the influence of the beautiful scenery on the troubled gamekeeper. The despair - such a fixture of Duror’s mind – is lulled by a splendid sun-filled morning in the forest:

The sky was vast and bright; the withered leaves underfoot were iridescent with melting frost; the very air glittered.

The vast sky here perhaps offers Duror a degree of hope - a blank canvas, uncorrupted by sin. Even the withered leaves which have connotations of decay (reminding us of Duror’s mental stability) are iridescent, as if healed by the combination of light and purity in the white frost.

The wood almost becomes magical, a place where the very air glittered. The idea of wealth and jewels implied by this word reminds us of Lady Runcie-Campbell and her grand mansion. Linking the forest to its owner, suggests they both have the power to alleviate suffering by bestowing their riches on those in need.

Moments like this convey the woods as a place of innocence, a landscape before evil and unhappiness.