The children's hearings system in Scotland is unique. The system is different from juvenile justice systems elsewhere in the UK.

Under Scots law, children under the age of 12 are not held criminally responsible for their actions but can be referred to the children's hearings for a variety of reasons. 12-year-old children can also be dealt with by the children's hearings system. Those under 16 are only considered for prosecution in court for serious offences such as murder, assault that puts a life in danger or serious road traffic offences that can lead to future disqualification from driving.

Children's hearings are very different from court cases. They are held for a variety of reasons, when someone is worried about a child or young person's wellbeing, not just when a criminal act is suspected. Their most important function is deciding the best way forward for the child/young person, not whether any one is guilty or someone should be punished. The mood of the meeting is as informal as possible so that the child/young person feels comfortable and is able to share his/her thoughts and experiences with panel members. 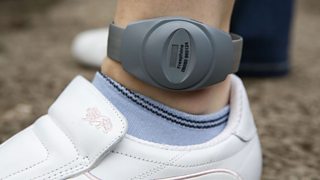 An electronic ankle tag monitors the movement of a young offender

The hearing will be held in the area where the child/young person lives. The child's parents are expected to attend too and can be fined if they do not. Another representative can also go along, including from the media, if it is felt that they have his or her best interests at heart. Under no circumstances can the child’s identity be disclosed.

If the panel thinks that a measure of supervision is necessary it will make a ‘Supervision Requirement’. This will allow the local authority social work department to support the child/young person at home and at school. It may also mean that it is best for the child to be taken from the family home to stay with foster parents or in a local authority or voluntary organisation care home.

Since 2004, the Antisocial Behaviour (Scotland) Act gives Children's Hearings the power to restrict a child or young person’s movement. Usually referred to as ‘tagging’, it involves the use of an electronic tag to monitor a child’s whereabouts. Other measures such as counselling will also be put in place to help the young person change their behaviour.