Tundra environments are known as 'The Land Without Trees'. The very cold and dry climatic conditions mean that these areas contain only a small variety of plants and animals, in comparison to the rainforest.

The soil is permanently frozen for much of the year and is known as permafrost. Even at the peak of summer, the soil underneath the surface remains frozen.

As a result, plants that require deep root systems cannot survive - vegetation is low and fast growing. The growing season is only about 50 to 60 days long and the thin soils are relatively infertile. The bare, rocky ground can only support low growing plants like shrubs, mosses, heaths and lichen.

The combination of permafrost, short summers and seasonal waterlogging, accounts for the fact that trees cannot grow in the tundra.

In winter, the tundra is covered in snow and ice and the soil is permanently frozen. Chilling winds compound the cold and little precipitation means that vegetation cannot survive. Animals like the polar bear, Arctic fox and snowshoe hare turn white to camouflage themselves so they can hunt for food.

In the summer when the snow and the top layer of permafrost melt, the landscape is covered with marshes, lakes, bogs and streams. The tundra appears like a wet and soggy place in summer because the precipitation that falls evaporates slowly and the permafrost prevents drainage.

During the summer months when there are more food sources, the tundra is home to a variety of mammals, such as caribou (reindeer), birds (eg sandpipers) and insects (eg black flies). 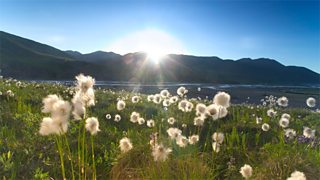 Vegetation needs to be able to tolerate cold and dry conditions. Cotton grass is a plant able to survive the harsh conditions in the tundra. The features which enable it to survive are: