Some enslaved people resisted by planning rebellions. They risked reprisals of torture and death. Some plantations were destroyed by the violence and people killed. The constant unrest reduced the profits made by the plantation owners.

Rebellions of enslaved people varied in size and most were put down with the help of forces from either the British Army or the Royal Navy. Some form of rebellion took place in most colonies around every 20 years. Notable revolts include:

Antigua 1736 - Plantation owners on Antigua discovered a plan by enslaved people to steal gunpowder and blow up the island's gentry at a ball. As punishment, over the next six months 88 enslaved people were put to death, most of them by being burned alive.

Tacky's Revolt 1760 - Tacky's Revolt took place on Jamaica. This was the largest uprising of enslaved people in a British colony in the 18th century. 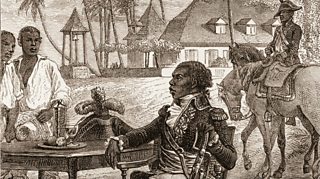 The French government failed to suppress the rebellion and Saint Domingue was eventually renamed ‘Haiti’ by the formerly enslaved people, who set up the first free black republic.

Grenada 1796 - Fédon’s revolt in Grenada was defeated by British troops.

Barbados 1816 - Enslaved people rose up on Barbados and burned a quarter of the island's sugar crop before the rebellion was suppressed.

Jamaica 1831 - During a massive rebellion in Jamaica, more than 20,000 rebels seized control of the north-west corner of the island, setting planters' houses on fire.

It took the British Army and militia a month to restore order. Some 200 enslaved African people and 14 white people died in the fighting. At least 340 enslaved people who had rebelled were hanged or shot afterwards.

The ‘Maroons’ of Jamaica were a mixture of indigenous islanders and runaway enslaved people hiding out on the island.

For over 80 years they held out and lived in the mountains, free from British rule. From their remote hideouts they mounted raids on the plantations.