In the first stanza, MacCaig creates an almost cartoon-like image of an American police officer. The physical description and the phrases he uses suggest a stereotype from a film or tv drama. But MacCaig also hints at the human being behind this image. 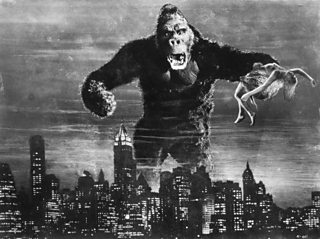 MacCaig's description of the policeman as a gorilla in New York is reminiscent of the giant ape, King Kong

MacCaig opens the poem with a simile that demonstrates the policeman’s physical potential. Here, the reader is given the impression of an imposing figure who is a formidable presence. He is immediately compared to an animal. The idea of a gorilla in New York suggests the giant ape, King Kong.

Though his physical stature is like a gorilla, MacCaig writes that he is less timid, showing a man who is tough and perhaps brave. While gorillas can be timid, they are more generally seen as violent and threatening. MacCaig's tone can be read jokily, implying the cop is even less timid than a not-very timid gorilla.

The policeman is then described as being tough on the inside, too, with MacCaig describing him as thick fleshed, steak-coloured. Word choice of flesh and steak compare the man to a piece of meat, something raw and uncompromising, with possible connotations of blood and violence. 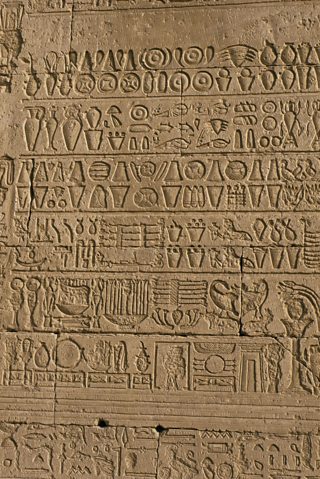 MacCaig then metaphorically describes the policeman’s eyes as two hieroglyphs that mean trouble.

Hieroglyphs are pictures that were used as language in Ancient Egypt. Each image would have a specific meaning. This presents his eyes as symbols that are difficult to read. Instead of his eyes showing inner emotion they only mean one thing - trouble.

Another key metaphor soon appears when MacCaig writes that the policeman walks the sidewalk and the thin tissue over violence. This tells us that violence is never far away in the streets that the man patrols – like tissue, peace is fragile, delicate and can shatter at any moment. The thin tissue creates a strong contrast to thick flesh. This suggests that importance of the cop in preventing the thin tissue of civilisation from ripping open into disorder.

The dangerous environment that the policeman works in is captured further when MacCaig writes that when he said, ‘See you, babe’ to his wife, he hoped it, he truly hoped it. The language the cop uses sounds cliched and thoughtless - like something from a film or tv series. However, the rest of this phrase shows the vulnerability that his role in society brings.

The repetition of hoped it goes some way in stressing the danger of his environment, hinting at desperation and contrasting with the casual dialogue between the policeman and his wife. To the policeman, saying see you to his wife isn’t just a meaningless comment but a genuine wish, and truly adds authenticity to this.

He is a gorilla MacCaig compares the policeman to a gorilla using a metaphor

MacCaig ends the stanza by repeating the gorilla image from the opening line. Instead of a simile saying the cop is like a gorilla, a metaphor is used, making the comparison stronger. To the policeman, Hiya Honey, is no cliché’. For him, this is a genuine loving greeting to his wife. He is truly grateful to make it home safely each day, and is grateful for the solace that can be found at home.