But Jamie, nothing's what we meant.

The fifth stanza moves from observing Jamie to addressing him directly. It is as if Paterson is trying to comfort his son and reassure him that it is OK to make a mistake by explaining that nothing is perfect.

The "But" changes the direction from the personal story to its more universal implications that "we all resent." He isn’t the only one who is angry about their plan not working out.

There is an uncertainty created by the word "nothing". It implies here that nothing turns out the way we mean it to, but also that this very consequence is 'meant' to be. This is what makes us human.

The speaker continues, "The dream is taxed". There is a double meaning here in the sense that it could be "taxed" as in strained, but also "taxed" as in a financial tax. This suggests a percentage or proportion of our dreams and plans that is taken away from us, that doesn’t work as planned. We don't quite achieve our complete aspiration: we always lose some of it.

the quarter bled off by the dark

This next line extends the idea. A "quarter" links to the idea of a proportion of tax taken from us. It implies that part of our plan is lost to "the dark", possibly the darkness of space. "Bled" implies an injury and how fragile human life is. It could also refer to the paint Jamie is using to draw a planet or moon mixing with the darker paint around it.

between the bowstring and the dark 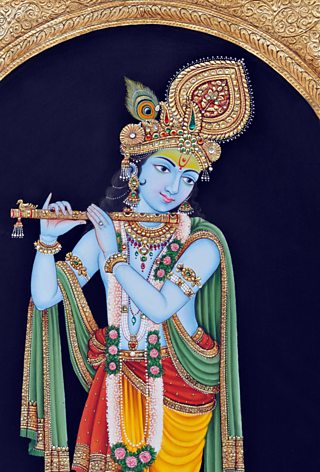 Krishna, the Hindu god of love and compassion, was the eighth avatar of the Indian god Vishnu.

Paterson uses the metaphor of shooting an arrow to describe our actions in life and how we are to some extent shooting in the dark. The "bowstring" suggests the moment a person takes aim, when they make their plan. But once the arrow is released it is out of our control.

The reference to "Krishna" in stanza seven is significant. Krishna, the Hindu god of love and compassion, was the eighth avatar of the Indian god Vishnu. He was shot by a hunter's arrow and was fatally wounded. This links back to the "bowstring" and bleeding imagery of the previous stanza. The speaker then affirms that "the target also draws our aim", which suggests that the target has its own designs on the shooter. This brings us back to fate "our will and nature's are the same" – we are as we were meant to be.