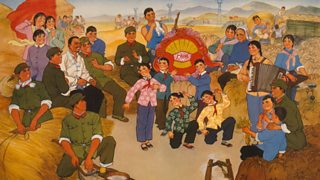 One interpretation of communist ideology is the idea that people are working together for the common good. In 1949, China's first communist leader Mao, believed that if the state owned the land and controlled the means of production (industry), then the wealth created could be shared out evenly amongst the people. The idea of individual ownership and individual wealth was not acceptable.

When the Communist Party gained control, China was a society where most people were poor and followed a basic agricultural way of life.

Between 1949 and the mid-1970s, China has become more developed but following Mao's communist ideology had not brought the progress that Chinese leaders had hoped. 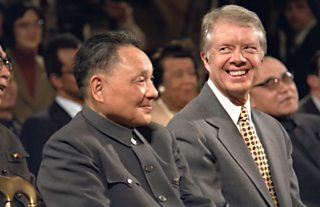 By the early 1980s, Deng Xiaoping had replaced Mao as the leader of China. He decided that the economic system, which was based on state planning and state ownership, had to be reformed in order to improve the standard of living for the people of China.

Deng realised that without economic reform the ruling position of the Communist Party in China would be threatened. He began improving relations with the outside world. He was the first Chinese leader to visit the USA and pointed to Japan as a country with a sound economic model.

Deng also planned to make China an important industrial nation. To do this he introduced the four modernisations: reforms in agriculture, industry, science and technology, and the army.

Crucially, in terms of communist ideology, Deng successfully argued that a market economy (as in the West) was not incompatible with communism. He believed that his proposals would benefit everyone in China in the long-term, further describing his plans as socialism with Chinese characteristics.

Deng began developing the Chinese economy gradually. First he opened up China to foreign investment. In the south east of China (Shenzhen) and in other designated parts of the country, Special Economic Zones (SEZs) were set up to attract multinational companies, such as IBM.

Deng also allowed individual Chinese citizens the right to start up a business or become involved with foreign companies in joint venture enterprises.

Within a few years, Deng's policies proved to be a huge success and were extended to other areas of China.