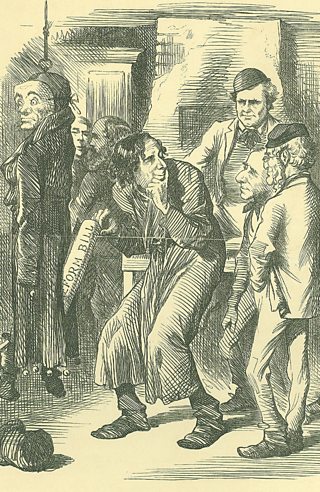 Disraeli was satirised for "stealing" ideas from the Liberals

The idea that a political party could gain support by passing reforms led to democratic change in Britain.

The desire to reform in order to gain support for a political party can be seen most clearly by the actions of Benjamin Disraeli and the Tory party. His aim was to “dish the Whigs” (defeat the Whigs) by “stealing the Liberals' clothes” (using their ideas).

Disraeli persuaded his supporters that the English working man would make limited demands on politicians - if kept housed, fed and clothed he would vote Conservative for ever. This gamble became known as ‘The Leap in the Dark’.

It was well known that the Liberals favoured an extension of the franchise to include the urban working class.

In 1864 Gladstone, the future Liberal Prime Minister, had declared that "Every man who is not presumably incapacitated by some consideration of personal fitness or of political danger is morally entitled to come within the pale of the Constitution, provided this does not lead to sudden or violent or excessive, or intoxicating political change."

However, while the Liberals were out of power, Disraeli’s government adopted their plans to extend the franchise. This was unusual as the Tories were not seen as the party of electoral reform. Traditionally they supported the interests of the landed class.

This Act of Parliament was passed when the Liberals were in power. It was believed that curtailing the amount that could be spent on election campaigns would affect the landed aristocracy more severely.

The aim was to create an even playing field for all prospective MPs to compete for votes. It could be argued that the Liberals passed this legislation in part, to try and reduce support for the Tories.

One of the Chartist's demands was for the secret ballot. This allowed all voting to be done in private. This helped lesson bribery, corruption and intimidation of voters.