Many religions hold beliefs about an afterlife and have specific ideas on what happens to the body and soul after death, including belief in heaven, hell or, in some religions, reincarnation.

Beliefs in life after death are not only held by religious people. Many people who are not religious believe in the possibility of an afterlife of some kind.

Christian beliefs in the afterlife

Most Christians strongly believe that death is not the end. Instead, they believe in the immortality of the soul and the possibility of life after death, as Jesus explains in the Bible:

I am the resurrection and the life. The one who believes in me will live, even though they die.John 11:25

They believe in the resurrection of the body on the Day of Judgement, when God will judge everyone individually and they will be sent to Heaven or Hell, as revealed in the Book of Revelation. Therefore, death is not to be feared for those who have lived morally and done God’s will.

The biblical story of the sheep and the goats explains the idea of judgement. The sheep represent all who have helped those in need or have given back to the world in some way. The goats represent those who have acted in an unkind or selfish way.

He will put the sheep on his right and the goats on his left. Then the King will say to those on his right, ‘Come, you who are blessed by my Father; take your inheritance, the kingdom prepared for you since the creation of the world.’Matthew 25:33-35

The good sheep are allowed a place in Heaven because they have been helpful and kind, giving the hungry food or the thirsty something to drink.

Then he will say to those on his left, ‘Depart from me, you who are cursed, into the eternal fire prepared for the devil and his angels.Matthew 25:41

The bad goats are people who, during their lives, did not show a caring side and ignored those in need. They are told they must go to Hell. 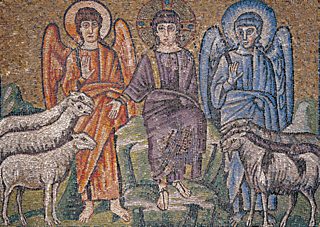 Many Christians believe that God has always existed as judge over his creation and that his interventions assist in achieving salvation. God’s judgement is a process that ends in a decision about whether or not a person is worthy of his reward (Heaven) or not (Hell).

Some Christians believe in the Second Coming, which is when Jesus will return to earth as a physical body and everyone who has died will be resurrected. This belief is affirmed in Protestant Churches with the declaration of the Mystery of Faith: Christ has died, Christ is risen, Christ will come again.

Others believe that all souls must wait until the Day of Judgement and will all be judged together.