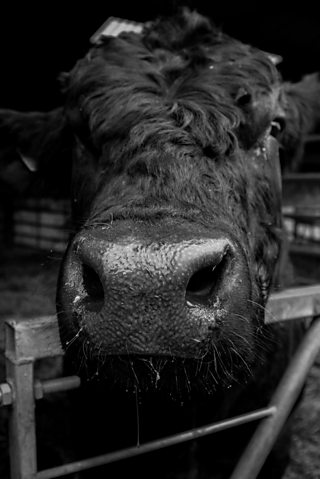 The girl runs away from the bull, which represents the devil to her

The scene switches again – this time to the lane leading away from the farm, down which the girl runs to get away from the terrible beast she has just seen. Pigtails reminds us of her youth and that she is female.

This is contrasted with the big boys she passes – older and male. They now seem to embody some of the evil that she has just seen in the stall. They kill frogs and insects for their amusement. It is not evident that the girl witnesses this at this point. What is important is that she is now aware of potential evil in the world and starts to see it everywhere. She can run away from the bull but not the revelation.

This association is not simply with people. As she runs she passes thorned hedge and harried nest. She sees a landscape under threat from the evils of the world. The nest reminds us of the eggs. It is a place of nurturing, where a mother bird will raise its chicks is vulnerable to predators. To develop the next generation, the bird must protect its offspring from those who would destroy them.

scared of the eggs shattering 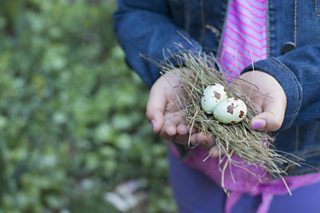 The young girl in the poem is determined to protect the eggs.

This idea is continued in the last few lines of the poem. As the girl runs in terror, she is afraid that the eggs will break and the milk in the jug will spill.

Small though she is, she is the one protecting them. This could suggest that she is growing up, becoming aware of her role as a woman, and possibly a mother.

Here, the eggs represent fragile life beginning and in need of care and protection. The milk represents nurturing and calm. Milk has the association of being nutritious and positive.

A mother gives milk to a baby. Milk is also alkali – it is the opposite of acid which we associate with corrosion and destruction. White milk also suggests the opposite of the black bull – the evil that Lochhead is now aware of.

in case the milk should spill

There is the idea here that milk represents the order of the world. It represents the giving and nurturing of life. We also think of the phrase as calm as milk. Spilling it would represent the destruction of the forces which tie the world together and the triumph of the forces of evil represented by the black bull in its stall. The end of the poem brings to mind the expression “there’s no use crying over spilled milk.” This suggests that the damage has been done. Lochhead cannot go back to being that innocent child. She has to carry on life with her new awareness, as best she can.