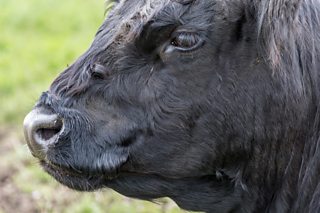 I remember once being shown the black bull/ when a child at the farm for eggs and milk.

Lochhead starts in a matter of fact way. “I remember once” points out that the events of the poem are a personal memory. She introduces an immediate contrast between the male bull and the “eggs and milk” with their suggestion of female nurturing.

They called him Bob

She looks back wryly on how the “monster" was introduced to her with an ordinary, everyday name as if it's true nature was being purposely disguised.

with the charm of a friendly name

The idea of a charm suggests some kind of magic. Together with the “friendly name” we get the idea of the girl being drawn in, possibly even seduced by something welcoming and attractive.

At the threshold of his outhouse, someone/ held my hand 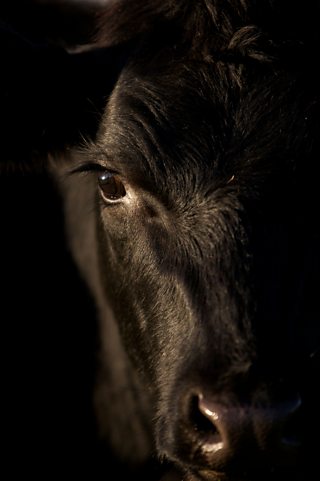 The “threshold” is an entrance. It suggests something that is crossed over, as if the girl’s experience sees her crossing from child to adulthood. Traditionally, a bride would be carried over the threshold of her new home by her groom. This introduces the idea of sex, that this is a moment of sexual awareness. Again, it is significant that this is a bull, a male animal.

Someone (an adult?) takes her hand, which suggests that they realise she needs protection from what she is about to see.

Because of her youthful innocence, the girl has no reference point for the creature she first beholds so Lochhead uses synesthesia to build up an idea of the bull through sensory description of how the bull looks, smells, sounds.

At first only black/ and the hot reek of him.

Then he was immense,/ his edges merging with the darkness

“Then” gives the impression that the girl’s eyes are adjusting to the dark and that she suddenly sees the bull fully. That he merges with the darkness lends him a sense of mystery and makes him sinister.

We get a sense of the tightness of the space and the oversized nature of the animal caged within it. Again “immense” suggests not just the power and significance of what the girl sees, but the overwhelming sense of awe she feels.

just/ a big bulk and a roar…/ a trampling, and a clanking

Lochhead uses synecdoche to describe the bull as a series of powerful but separate sounds and details. This isn’t so much an animal as a series of noises. This emphasises how affected the girl is by the actions of the animal as well as stressing its physicality and threat.

At the end of the stanza we get a sense of the bull as something more like a monster than an animal. The girl notes the great wedge of its tossed head. This distortion of his physical shape suggests something almost mythical about the animal. His fury indicates that the girl should rightly be afraid of him.