The roles of William Wallace and Andrew Moray

Andrew Moray, in the north-east of Scotland

Andrew Moray had been captured after fighting for King John at the Battle of Dunbar but had escaped only to find his family's lands in Avoch on the Black Isle under English control.

Andrew Moray led resistance in the North. Moray led a guerilla campaign capturing Urquhart, Inverness. Elgin, Duffus, Banff and Inverness castles. By the middle of 1297, he had driven the English south of the River Tay.

He then moved south to Dundee, where he joined forces with William Wallace.

William Wallace in the South-west of Scotland

Little is known of William Wallace before the events of 1297, other than he was born near Paisley.

Wallace is first mentioned by English contemporary sources as an outlaw. He is reported to have killed the English Sheriff of Lanark, in May 1297. 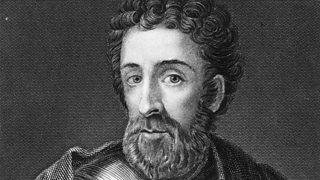 William Wallace was first described as an 'outlaw' in 1297

He then led a rebellion across Scotland, attacking English soldiers and officials.

He was supported by important figures such as Bishop Wishart of Glasgow, the noble Sir William Douglas and Robert the Bruce. However, although many nobles supported him openly at first, they surrendered to Edward’s nobles at Irvine in July 1297.

Wallace himself refused to surrender and continued his fight against English occupation. He probably avoided capture in the summer months by hiding in Selkirk Forest.

Wallace moved north at the end of the summer and met with Andrew Moray near Dundee.