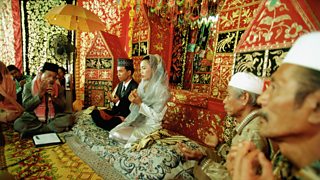 Muslim cleric reading from the Qur'an to bind bride and groom in marriage, Indonesia.

Marriage is expected for all Muslims and sex should only take place within marriage. Muslims do not expect any individual to take a vow of celibacy.

Muslim parents may arrange a suitable marriage partner for their children. However, the couple have to agree to their parents' choice. Love often grows between a couple as the marriage develops, rather than the couple falling in love before they enter into marriage. Forced marriages are generally not acceptable to Muslims.

Marriage is intended to be:

Marriage celebrations for Muslims are traditionally simple events performed at the bride's home and led by a respected member of the Muslim community. They tend to include the following:

For Shi'ah Muslims, there is no requirement to have witnesses for a marriage contract to be valid.

Having a Muslim marriage means that the bride and groom can understand what is expected of each other in living together and in bringing up their family. They have the support of the ummah to help them through the issues that all marriages may face.

The Qur'an allows a man to practise polygamy. A husband may have up to four wives, provided that all four are treated equally and lovingly. A woman is only allowed one husband. In most cases, however, Muslims practise monogamy.