Based on real settlements called East and West Hampton, these are two very wealthy residential areas on Long Island, separated by a bay.

Gatsby's house is in West Egg, which Nick, aware he is oversimplifying, describes as 'the less fashionable' of the two, although he adds that the differences between the areas are 'bizarre and not a little sinister'. 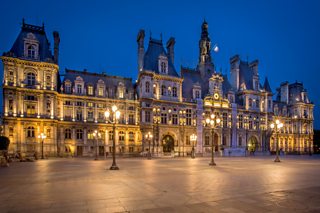 Although Gatsby's house is huge and lavish, it is tasteless, showing his lack of real sophistication. Nick sneers at it for being unattractive and looking like a copy of a Normandy Hôtel de Ville. This suggests its design is inappropriately grandiose for a dwelling house. It is significant that it is an imitation, as Gatsby himself is an imitation. The fact it is obviously new is a negative feature because it means it has a lack of heritage, something Tom mocks Gatsby for when he calls him "Mr Nobody from Nowhere".

Fitzgerald's use of personification in the phrase "a thin beard of raw ivy" is effective in again demanding comparison with its occupant. The image is comic, but also suggests youth and vulnerability, as well as a wish for concealment – just as Gatsby is concealing his real self.

Nick's house, which he mocks as a "small eyesore", is also in West Egg. However, Nick has admitted his family are 'well-to-do' and his poverty is only assumed. When he describes his little house as "squeezed between two huge places", this looks forward to Nick being caught in the emotional crossfire between Gatsby and the Buchanans.

Daisy and Tom live in East Egg, which is much more exclusive and where the old money set live. The phrase "indiscernible barbed wire" used in chapter eight sums up the social barrier between the two 'Eggs' which even money can't penetrate. While East Egg is also expensive and luxurious, it is beautiful:

the white palaces of fashionable East Egg glittered along the water...

The word 'palaces' evokes connotations of royalty, and although they have no titles, the Buchanans are the American equivalent of aristocrats. 'Glittered' perhaps suggests hardness and impenetrability as well as beauty. The use of plurals suggests that with the Buchanans, money is no object: following on from a huge lawn are "sundials and brick walks and burning gardens". Nick is enchanted by his first view of their house: "the front was broken by a line of French windows, glowing now with reflected gold."

The Buchanans' house is the epitome of good taste: 'Georgian colonial' suggests an illustrious ancestral background, although we learn later Tom actually bought the house from "an oil man". Daisy's drawing room seems as delicate and charming as Daisy herself on first appearance: "a bright rosy-coloured space, fragilely bound into the house" …with a "frosted wedding-cake" of a ceiling and a '"wine-coloured" rug.

However, Nick's description includes discordant notes: the breeze blowing through the open windows causes the curtains to "whip and snap" and a picture to "groan". These sharp, negative monosyllables hint at the tensions in the household. Most significantly, Daisy's house has a private dock on the water with a "green light". It is this which comes to symbolise Gatsby's dream.