In Scotland, it is predicted that the long term effects of climate change will lead to more storms and wetter, wilder weather. While bad enough in itself, this can have other knock-on effects such as flash floods and more landslides.

Recent years have already seen landslides in Scotland cause disruption and even claim lives. 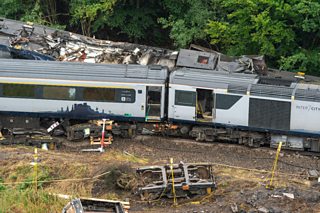 The train derailment at Stonehaven, 2020.

In August 2020 much of central and eastern Scotland experienced thunder storms and torrential rain which led to localised flooding that deluged homes, disrupted travel, and caused power black outs.

The extreme weather also caused the death of three people when the 06.38 train from Aberdeen to Glasgow crashed into a landslide near Stonehaven.

The heavy rain had already caused flooding on the train lines in the area and the train was diverted on to an alternative route. Further along this line, the rain had weakened an embankment which had then collapsed and spilled over the train tracks. The train hit this material and was derailed.

After the crash, Network Rail, the organisation tasked with maintaining Britain’s train tracks, acknowledged that climate change would make landslides more of a problem in the future.

Rest and Be Thankful landslides 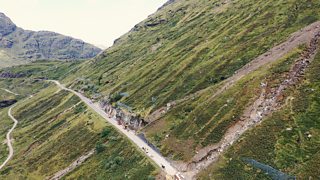 The damaged Rest and Be Thankful section of the A83.

In September 2020, the Rest and Be Thankful stretch of the A83 road was blocked by around 1,000 tonnes of boulders and mud. In August 2020 the same stretch of road had been closed due to another landslide.

The steep sides of the valley the road runs through at the Rest and Be Thankful has lots of large boulders and loose rock. Heavy rains can loosen this material further and cause it to tumble downhill. On its way down, more and more mud and rocks are stripped from the hillsides and the resulting landslide then covers and blocks the road.

The A83 is an essential link for communities such as Arrochar, Inveraray, Lochgilphead, and Campbeltown and the Kintyre peninsula. It is also a major route for tourists and this stretch of road can be used by thousands of cars every day.

When closed, travellers face a 59-mile detour that can cause increased traffic and detours on other roads. Closure also affects the town reliant on the road for tourism.

To help keep the road open, £83 million has been spent on the route. This includes the installation of steel rockfall barriers and “catchpits” designed to stop boulders and mud from reaching the road.

In March 2021, the Scottish Government announced that a new road route would be built to bypass the Rest and Be Thankful. The exact path of the new route has yet to be announced.