Since the 1980s trading between countries has dramatically increased. Countries are able to trade relatively freely with one another, selling as much as they want without limitations. Within trade blocs, countries can trade freely, importing and exporting as many goods and services as they wish – this is called free trade. However, more and more groups of people and governments are questioning this type of trade, and if it is fair for all countries to trade in such a way.

In Kenya, the flower industry has grown rapidly since the late 1990s. Flowers are grown and sold to many of its trading bloc partners and to other countries of the world. Many farmers in Kenya have changed their fields so that they can grow flowers, which can often bring greater profits. However, the Kenyan farmers are now growing so effectively, that there is often a surplus of flowers available for export. This leads to a drop in value and puts some farmers out of business. Strict World Trade Organization (WTO) laws prevent Kenyan farmers from acquiring subsidies, which further exacerbates the problem.

However, as part of a fair trade agreement with British supermarkets such as Sainsbury’s and the Co-operative, some Kenyan farmers are now Fairtrade producers. This means their products are traceable back to the original farm. The price labels in Sainsbury’s, for example, say which farm the flowers have come from. Fairtrade certified farms must ensure safety and working conditions for their employees and a premium of ten per cent for every stem sold.

Further benefits of fair trade are that flower workers throughout Kenya are often guaranteed work and a fair price for goods produced – unlike free trade. In addition, the local communities around the farming areas are also provided with financial support to improve people’s lives, with investment in healthcare, education and other social benefits. 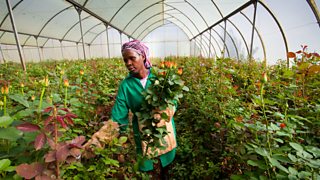