Miller’s description of the stage set is extremely detailed and precise. A lot can be inferred from this set. It is a tenement building. The interior of the Carbones’ home can be seen.

It is clean, sparse, homely, with basic furniture. Doors can be seen leading to a bedroom and a kitchen. In addition, on stage is Mr Alfieri’s law office, shown by a desk.

Crucially, there is also a telephone booth, which Miller states is not used until the last scenes. Stairs can be seen, running up to, and running further up from, the apartment, implying that this is an upper-storey home. As the curtain rises on the first act, two men are seen pitching coins, and a distant foghorn can be heard. Alfieri enters.

Alfieri takes two roles, one as narrator and the other as a chorus, as in a Greek tragedy. Here he is acting as a chorus. He makes a long introductory speech, addressing the audience directly, and stating that he is a lawyer. He observes that the people of Italian descent living in Red Hook do not trust lawyers. They put them in the same category as priests, only associating them with disasters.

He tells the audience that he lived in Italy until he was 25. We know that he is in his fifties now from the stage directions. Therefore he has experienced both the Italian and American ways of life equally. He mentions Al Capone, a gangster who grew up in the area, and Frankie Yale, another real-life gangster murdered on the streets. He says, Justice is very important here. He adds that he now thinks like the Americans do, and believes that the written law is the best way to settle matters.

He states that his job is mainly involved with small cases, such as compensation, evictions and family arguments. It is not glamorous at all. He observes that every now and then he is involved in a case in which he is completely powerless. At times like this, he feels a connection back through the ages with lawyers from ancient Sicily. The audience is made to understand that the story which follows will be violent and tragic, just like an ancient Greek tragedy.

The Carbone family at home 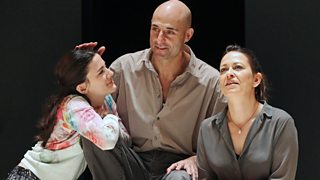 Eddie comes home from his work as a longshoreman at the docks by Brooklyn Bridge. He greets Louis and Mike, two fellow longshoremen who work with Eddie at the docks. They are pitching coins against the building.

As he enters his apartment, his niece, Catherine, is waiting for him. He compliments her on her appearance and she says she has something to tell him, but that they must wait for Beatrice, Eddie’s wife, to come in. He tells Catherine that he doesn’t think she should go out wearing such a short skirt and such high heels. He says Katie, I promised your mother on her deathbed. I’m responsible for you. You’re a baby, you don’t understand these things. He warns her to be more discreet about talking to men.

Eddie calls to the kitchen for Beatrice and announces that her cousins, Marco and Rodolpho, have arrived. They are still on board the boat from Sicily, but Tony Bereli will bring them to the apartment at ten o’clock that night. Illegal immigrants are known as submarines.

Beatrice is delighted but also worries about what her cousins will think of the apartment. Eddie reassures her that it will seem like a palace in comparison with their home in Sicily. He tells her that she is too kind and hopes that they will not take advantage of her.

Catherine is bursting to share her own news. She has been offered a job at a big plumbing company on Nostrand Avenue as a stenographer. Beatrice is happy for Catherine but Eddie says It’s not wonderful. You’ll never get nowheres unless you finish school. You can’t take no job. Catherine tells him that she can start work and still take the exam at the end of the year, so will not lose out. Eddie raises all sorts of objections; he says that the plumbing company is not good enough; he thinks she could get a job in a lawyer’s office in New York City.

Beatrice begins to get angry and tells her husband that he is always finding excuses not to let Catherine grow up and leave home. He is insulted. As Catherine sets out the food for the evening meal, Eddie softens and looks at her with emotion. He jokes wistfully with her, saying that she will move away and then her visits will become less and less frequent. When Beatrice intervenes he reacts harshly, accusing her of knowing nothing about the situation, since she has never worked.

They begin to eat and the mood lightens. Eddie warns the women not to discuss the immigrants. He tells the story of Vinny Bolzano, who informed on his own uncle to the immigration authorities. He then gives Catherine permission to take the job. There is obvious tension between Eddie and Beatrice and they exchange some unpleasant words.