The campaign of the Anti-Slavery Society

Society for the Abolition of the Slave Trade, 1787 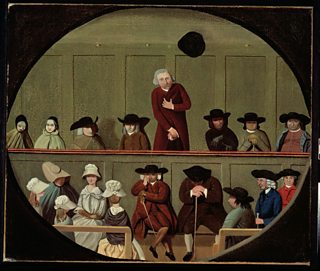 The Society for the Abolition of the Slave Trade was formed in London on 22 May 1787. This was the first non-denominational committee, where different religious groups came together to strengthen their purpose.

Nine of the committee were Quaker and three were Anglican (Church of England). Two of the Anglicans, Granville Sharp and Thomas Clarkson, were nominated as President and Secretary.

Thomas Clarkson visited ports such as Bristol and Liverpool to collect evidence from over 20,000 sailors who worked on the slave trade. He obtained witnesses for the Parliamentary investigations and collected a range of objects associated with slavery - handcuffs, whips and branding irons - to use as evidence.

Perhaps his most significant contribution was the tours he made across Britain. Clarkson also successfully recruited the MP William Wilberforce to be the campaign’s Parliamentary spokesmen. This provided the Society with an inside man who could get the campaign going.

Granville Sharp was a deeply religious man and founding member of the Society. His main contribution to the abolition movement was his ability to use the law in the struggle against the slave trade.

Olaudah Equiano attended many public meetings as part of the Society for the Abolition of the Slave Trade. He gave first-hand accounts on his life as a slave. He published one of the few eyewitness accounts from a slave, 'The Interesting Life of Olaudah Equiano'.

John Newton's sermons became famous and many supporters came to his church in London to hear his speeches. He shared public meetings and lecture tours with Clarkson and Equiano and wrote several books about his experiences in the slave trade.

Josiah Wedgwood was another of the founding members of the Society. He made his fortune from Wedgwood pottery and used his factory to make a range of fashionable items to promote the aims of the Society.