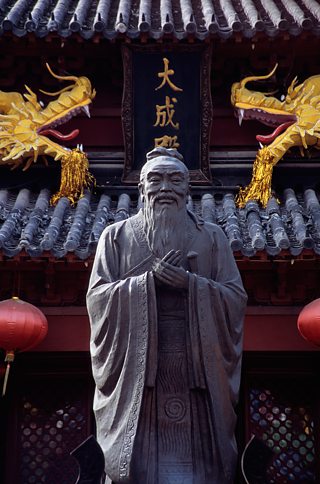 A statue of Confucius

Music in China is strongly influenced by philosophy and concepts of important historical thinkers such as Confucius. Music is considered a highly calming influence, examples of this approach being space and fluency in performance. Sometimes there are moments of silence within the performance, which facilitates engagement and a connection between audience and players.

The tonality of Chinese music is pentatonic. This means it uses a scale of five notes for melodies. Harmonies are also created within this structure. Sometimes Chinese music is also heptatonic, using a seven-note scale, which is an extension of the pentatonic structure.

The texture of Chinese music is often monophonic, where only one instrument is playing , or heterophonic. A heterophonic texture is one where a core melody is simultaneously played with decorated versions of the same melody.

Instruments are categorised in types according to the materials from which they are made. These include strings bowed and plucked, woodwind, and both tuned and untuned percussion.

Instruments can be divided in even more detail into those made of gourds (early sheng instruments used these), bamboo (flutes), wood (string instruments), silk (although rarely used, strings can be made of silk), clay (used for a type of compact flute which can resemble an ocarina), metal (gongs), animal skin (drums) and even stone (used to create a ringing sound).

Examples of particularly distinctive Chinese instruments include the sheng, a woodwind instrument which consists of a set of pipes of different lengths which vibrate at different frequencies. The guan is another woodwind instrument consisting of a double-reed mouthpiece and wooden finger-holes, and the dizi, a wooden flute.

Well known string instruments include the pipa, a tear-drop shaped four string lute, which features techniques such as a rapid strum. The erh-hu is a bowed string instrument, which consists of two strings without a fretboard. Its curved bow is permanently held between its strings which causes both to vibrate as it is played.

The voice also features in the music of China, as do various kinds of drums including the dagu and yaogu.

In this clip, musician Hong Wang gives a virtuoso performance on the erh-hu or Chinese two-string fiddle.

Chinese musician Winnie Wong discusses the origins, history and construction of the guzheng or Chinese zither, before giving a performance