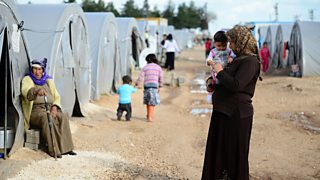 The Syrian crisis is an on-going armed conflict in Syria between forces loyal to the Ba’ath government and those opposing them. In 2016, it was estimated that over 470,000 had died as a result of the civil war.

An estimated 6 million people are Syrian refugees who have sought refuge and protection across Europe from 2011 to the present day.

The unrest in Syria started in 2011 and it only took 1 month before the first migrants started to arrive in Turkey. Nearly half of these (around 3 million people) have remained in Turkey.

About 30% of the registered refugees live in 22 government-run camps near the Syrian border. Turkey is the home to the highest number of Syrian refugees and has provided more than $8 billion of aid.

Other countries have promised to help Turkey with this but much of the aid promised has not arrived.

Why are the Syrians leaving Syria?

Why have so many Syrians gone to Turkey?

Challenges faced by the refugees

As over 3 million Syrians have decided to remain in Turkey, this continues to put some serious pressure on the government resources.