Since the People's Republic of China was founded, democracy and individual human rights have not been given the same importance in society as in the UK, Europe or the USA. Evidence suggests most Chinese people accept their government and are not looking to change the way the government is chosen. 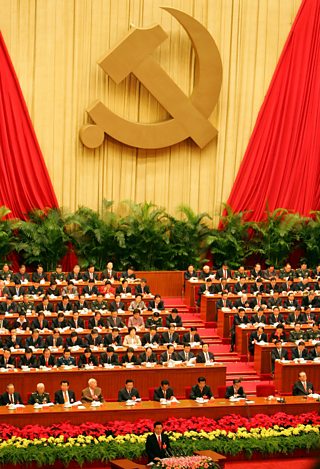 Many Chinese people, some commentators argue, appear to be satisfied with the government as it is improving the standard of living of most Chinese people.

Chinese leaders have stated many times that there will be 'no western-style democracy' in China. This means CPC leaders are not prepared to introduce free elections and multi-party politics, as we have in the UK. However, it has been recognised by the CPC that their leaders need to be able to respond to what people need. They have done so by the following means.

For more than 25 years Chinese people have had the right to choose locally-elected town and village representatives. However, most representatives are members of the CPC and any non-CPC representatives are closely monitored by the CPC. The CPC also oversees the election process. More recently, limited elections have also been held in district and country areas. In 2012, the first-ever free village committee election was held in the fishing village of Wukan in the Guangdong province. The process of allowing greater decision making at local level has been called the development of grassroots democracy.

Attempts have been made to allow Chinese people the opportunity to express their views through focus groups – small numbers of people surveyed for opinions – and public opinion polls. This has allowed people to express an opinion and for the CPC to draw up policy to address peoples' concerns.

Membership has been widened to allow more people to become part of the decision making process.

In recent years China has seen an increase in the number of public or street protests ('mass incidents'). Most protests are in regard of corruption or environmental pollution. Although the CPC disapprove of these protests and people can be arrested, it is thought the CPC have become more tolerant of them if it allows people to voice their complaints without challenging CPC rule.

Opposition to the CPC 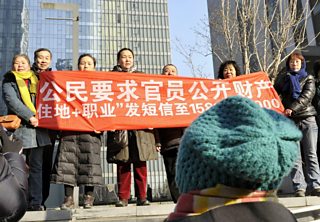 Supporters of Xu Zhiyong, a Chinese human rights activist, protest his arrest in 2014

Opposition to the CPC is not tolerated. For over 70 years the Chinese government has used the army and police to crack down on anyone demanding increased political freedom or the right to vote.

Dissidents are people who oppose the Chinese political system. Punishment for dissidents is harsh and can include long periods in prison, torture, or exile (exclusion from China).

Since early 2013, when Xi Jinping became president, Amnesty International claims up to 1800 people have been illegally detained. In 2015, pro-democracy and anti-censorship campaigner, Guo Feixiong, was sentenced to six years imprisonment.

The CPC has developed a number of strategies for controlling information and protest.

Newspapers, radio and television are largely state (or CPC) controlled and reflect the views of the CPC. Journalists are restricted in what they can report and may be subject to arrest or imprisonment for any criticism of the government or Communist Party.

The Hong Kong newspaper ‘Apple Daily’ closed in 2021 as a result of pressure from Chinese authorities. It was a pro-democracy paper and many of its journalists had been arrested.

The 'Great firewall of China'

The internet is heavily monitored and controlled. Access is denied to websites that may be critical of the CPC. Foreign websites, blogs and social media sites are also blocked or banned.

For example, TikTok was created and is run by a Chinese company, ByteDance, but it is not available in China. Instead Chinese people can access a similar site, Douyin, but are not able to see content created by users outside China.

Those involved in illegal online activity may be arrested and subject to long periods of imprisonment.

Foreign journalists and reporters are closely regulated. Many have been subjected to harassment and threats by plain clothes police or other government officials.

In 2015, the CPC issued new rules for its 88 million members to ensure the party leaders have tighter control over ordinary members. Included in these new rules are further controls on political speech and meetings.