The US army had superior conventional weapons but they were ineffective against a country that was not industrialized and an army which employed guerrilla tactics and used the dense jungle as cover.

North Vietnamese soldiers were dedicated to fighting for independence and for communism. They were fiercely loyal to their leadership, which had already provided land reform in the north.

These soldiers were conscripted and served long tours of duty. As a result, the Vietcong became highly experienced and knowledgeable about American tactics.

The Vietcong had an intricate knowledge of the terrain. They won the hearts and minds of the South Vietnamese people by living in their villages and helping them with their everyday lives.

Their tunnel systems, booby-traps and jungle cover meant they were difficult to defeat and hard to find. 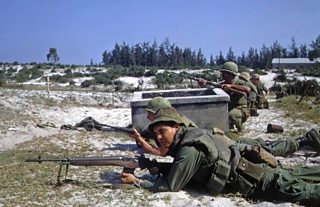 US marines fight beside ARVN troops during the Tet Offensive

The North Vietnamese were supplied and supported by China and the Soviet Union. A total of $2 billion was given in aid to the fight against America between 1965-1968. This included 8,000 anti-aircraft guns and 200 anti-aircraft missile sites.

On January 31 1968, during celebrations of the Vietnamese New Year (known as Tet), North Vietnam, supported by South Vietnamese Vietcong launched surprise assaults on towns and cities in US-held areas of South Vietnam. They took control of parts of Saigon and other cities, having most success in Vietnam's ancient capital, Hue. One group managed to blow a hole in the walls around the US Embassy in Saigon.

The Vietcong did not hold onto any of the territory gained for long. They suffered many casualites and the Tet Offensive was a military defeat for them.

The offensive failed but has been viewed as a turning point. It had two important effects: