The US Army employed several strategies which turned out to be ineffective in stopping the advance of the enemy in Vietnam.

This was an attempt to stop Vietcong from using sympathetic southern villagers to help them hide in the countryside.

Vietnamese peasants were removed from their villages and made to live in defended strategic hamlets in loyal areas. Forced people from their land created immense opposition, unrest and hatred towards the south and USA.

It was also difficult to identify potential Vietcong from peasants, meaning Vietcong could infiltrate loyal areas. 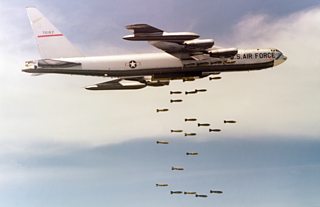 The US Air Force organised a bombing campaign of Northern Vietnam from 1965-1972. The aim was to destroy military and industrial targets in the north and hit strategic targets in Vietnamese cities.

This offensive resulted in an increase in volunteers for the Vietcong. The north also had little industry to destroy. A great deal of the military infrastructure was underground or in caves.

Between 1961 and 1971, the USA used chemicals to destroy food crops and jungle foliage in Vietnam. The aim was to deprive the Vietcong of food and destroy tree-cover used by the Vietcong in the jungle and along the Ho Chi Minh Trail - the route used by North Vietnamese troops and their supply train.

Rainbow herbicides such as Agent Orange and Agent Blue were effective at clearing land. But this type of warfare increased opposition from Vietnamese peasants whose livelihoods were destroyed.

Hundreds of thousands of babies were born with birth defects as a result of the chemical spraying. So much of the countryside was destroyed that urban populations almost trebled during the war. When the side-effects of these chemicals became known, opposition to the war grew amongst the US public as well as humanitarian, scientific and environmental groups. 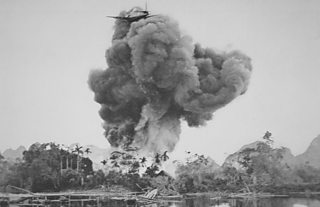 The chemical napalm is a combination of a gelling agent and petroleum. It causes horrific burns as it sticks to human skin and cannot be easily removed. It also intensifies heat in the atmosphere and causes choking.

Dropped from the air, this anti-personnel weapon was used to attack large groups of soldiers. However, civilians were often caught up in attacks. This turned many Vietnamese against the US and increased opposition at home.

Often transported by helicopter, US troops entered Vietnamese villages in search of Vietcong suspected of hiding amongst the peasants. Civilian casualties from these raids were often high, alienating the population.

On 16 March 1968, US soldiers killed several hundred Vietnamese civilians in what has known as the My Lai massacre. It has been reported that US soldiers involved were under severe stress and the influence of narcotics.

Many US troops were inexperienced. As a result of conscription and circulation of tours, personnel in Vietnam changed regularly. The average age of a soldier was 19 and they usually only served one year in Vietnam. 43 per cent died in the first three months of their tour of duty.

Cohesion of army units suffered as a result and American troops were often disillusioned with the war and not fully prepared for battle. Many used drugs to cope with the horrors and pressures. 503,000 soldiers deserted between 1966-1973.

Fragging - the killing of US officers by US soldiers as a result of tension between new recruits and battle-hardened officers was common.

Ill feeling also came from many black soldiers who experienced discrimination at home, but were expected to fight for America and for freedom from communism.