The importance of sound

Although film is sometimes thought of as a purely visual art-form it also relies heavily upon audio.

Even in the days of silent film, movies were usually screened with live performances from musicians who would play in time with the action on screen.

With the invention of sound, film-makers in the late 1920’s were suddenly able to add a new dimension to their stories.

Actors could be heard to speak, actions could be highlighted with the use of vivid sound effects, and music could be used to give extra emotional life to films.

It is now impossible to analyse cinema or to make films without understanding how film-makers use sound.

Different types of film sound include:

The word 'diegetic' means to come from the world of a story. 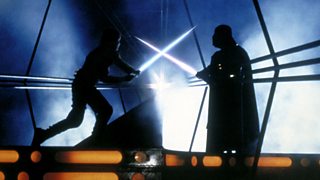 The sounds made by lightsabers in the Star Wars films are diegetic.

It is sound which the characters on screen can hear and can include sound effects, the sounds made by movements and actions of characters, background noise and spoken dialogue.

Non-diegetic sound is any sound which does not come directly from the world of the story onscreen.

The characters in the film are unaware of these sounds, because they don't exist in their world. 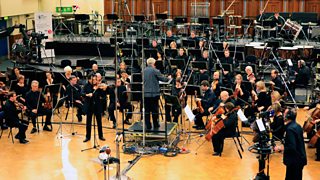 Most films will have a musical score which will accompany the action on screen.

Film scores are non-diegetic and cannot be heard by the characters on screen.

Sometimes, however, films will feature diegetic music. If a character is listening to music playing on a radio or if characters are singing or playing a musical instrument, then that music is diegetic.

A sound effect is any sound, other than speech or music, which has been recorded specifically for the film.

Sound effects are usually tied to specific actions on-screen and recorded during post-production to enhance a scene.

A director might, for example, ask their sound designer to record high impact punching sounds to make a fist fight feel more exciting.