While there are still huge problems of poverty in sub-Saharan Africa especially, there is growing optimism about tackling the issue of poverty. African people are putting pressure on their leaders to end corruption and be more democratic.

Africa is among the fastest-growing regions in the world and its people are embracing modern technology. Access to communications is changing the continent and the use of and access to mobile phones has had a huge impact. Farmers have started using hand-held gadgets to gain access to weather reports. The internet is changing the way business can be carried out. More countries are having democratic elections. 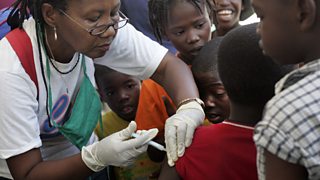 A nurse injecting a child in Africa

Child mortality in Bangladesh has been cut by more than 60% since 1990, while the proportion of mothers dying in childbirth has fallen threefold. Almost 90% of children are immunised against measles, diphtheria and polio, compared to just 1% in 1985. According to research by Oxford University's Poverty and Human Development Initiative, Bangladesh the most densely populated sizeable country on earth, will if current trends continue, have “eradicated” absolute poverty within the next two decades.

There are similar triumphs worldwide. Every day 12,000 fewer children under the age of five now die than in 1990. Measles deaths are down by 78% since the turn of the millennium and more than 90 per cent of children now start primary school.

If this progress continues, MDG Target 1, cutting the extreme poverty rate to half its 1990 level by the end of 2015 will have been comfortably achieved.

This will still leave many millions of people, almost 16% of the world’s population, living on less than $1.25 a day by 2015. Four out of every five people living in extreme poverty will be in sub-Saharan Africa and Southern Asia despite significant progress.