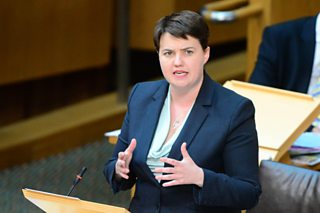 Most of the major parties in Scotland have made commitments to improve the representation of women and members from black, Asian, and minority ethnic (BAME) communities. As of 2017, the leaders of Scotland’s two largest parties (the SNP and the Scottish Conservatives) are both women.

Despite this, at the last election in 2016 all parties agreed that more needed to be done to make sure the Scottish Parliament reflected Scottish society.

Comparisons with the Scottish population

While it is doing marginally better than the UK Parliament (32% female), the Scottish Parliament is still short of the ideal 50%. All of the major parties are committed to improving the representation of women. Many of the major parties have introduced all-women shortlists for selecting candidates for election and the SNP and the Conservative have female leaders. Labour also used to have a female leader until Kezia Dugdale stepped down in 2017.

As of the 2016 election, the percentage of female MSPs stands per political party stands at: –

As of 2015, 1.8% of Scotland's population identified their sexual orientation as lesbian, gay, bisexual, or other. This means that the Scottish Parliament reflects LGBT interests well.

Scotland has also been applauded by LGBT charities and organisations for introducing progressive policies such as recognising gay marriage and pledges to legislate for non-binary gender recognition for the transgender community.

As of the latest figures, from 2015, minority ethnic groups represented 3.7% of the Scottish population. With only 2 MSPs from ethnic minority backgrounds (1.5% of Parliament) there is still further to go to represent these interests.

A full 20% of MSPs were privately educated compared with just 4% of the Scottish population. While this is a marked difference and raises questions of accurately representing Scotland’s people, it is better than the UK Parliament where 29% of the MPs had attended non-state schools.