Panta rei – 'nothing endures'. These Greek words, recalled from an almost forgotten lesson, come into Chris's mind as she gazes down the valley after her father's death.

Sea and sky and the folk who wrote and fought and were learned, teaching and saying and praying, they lasted but as a breath. 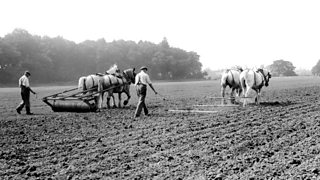 Farmers working the land in the early 19th century

Grassic Gibbon's message is that nothing stays the same.

Change is the main theme of Sunset Song. The structure emphasises this, as it focuses on the ever-changing cycle of the farming year: ploughing; drilling; seed-time; harvest. This is a metaphor for human life and its constant state of change and development.

Each chapter begins and ends at the Standing Stones, which are simultaneously symbols of change and permanence. They are symbols of change, because those who erected them died thousands of years ago.

On a deeper level, they are symbols of change because they mark the period of time when mankind moved away from a hunter-gatherer, nomadic existence towards an agricultural, land-ownership based existence.

But they are also symbols of permanence because they survive.

The Prelude compresses a thousand years of Kinraddie's history into a few pages, emphasising how life keeps moving on, and fortunes wax and wane.However, the main impression is that things change for the worse; the Kinraddies' Meikle [big] House ends up crumbled away like a cheese, and the last of their descendants goes mad.

Some changes are inevitable, like the passage of the seasons. Others are brought about by people and their actions, such as John Guthrie's incident with the lady motorist which leads to the family moving house.

However, change is not always seen as negative; the charming Marget Strachan, who briefly brightens Chris's early life, tells her there were lovely things in the world, lovely that didn't endure and the lovelier for that. The early days of Chris's marriage before she becomes a mother might be an example.

Chris is the sole survivor of a family that once comprised eight people. Chris then marries and becomes a mother.

She is aware she is changing into a different person:

Chris Guthrie crept out from the place below the beech trees where Chris Tavendale lay and went wandering off into the waiting quiet of the afternoon, Chris Tavendale heard her go and she came back to Blawearie never again.

A whole way of life changes during the course of the novel, as John Guthrie realises: the day of the crofter was fell near finished. Farming methods change: John Guthrie uses old methods like the scythe, while the younger generation like Will and Ewan prefer modern machinery like binders.

The war acts as a catalyst, speeding up the rate of change. Ewan is transformed by his army experience into someone coarse and strange and strong.

The stripping of the forests damages the countryside by exposing it to wind erosion. When Chae returns, he notes how the folk seemed different; into their bones the War had eaten, they were money-mad or mad with grief.

When the war is over and the Kinraddie estate trustees sell up, only a few of the richer tenants can afford to buy their land; the rest leave. Farms are amalgamated into large units and turned over to sheep.

When Robert Colquhoun gives the address at the service of dedication for the war memorial, he describes those who died as the last of the Peasants, the last of the old Scots folk.

His closing words sum up the theme of the novel: Nothing, it has been said is true but change.