Cholera first appeared in Britain in 1831, on board a boat from India. Like the Black Death, it came by sea and caused a similar fear in people.

Cholera is a bacterial infection caused by contaminated food or water. It thrived in Britain’s industrial towns. It caused vomiting and diarrhoea, and could result in death within a matter of hours.

That is what made it so frightening. No-one knew what caused it. Various causes were suggested, eg poisonous air, drunkenness and moral laxity.

The epidemic of 1831-32 claimed 50,000 lives across the UK. In Wales, Merthyr was badly affected, though towns like Swansea, Holywell and Denbigh also suffered.

Merthyr Tydfil was badly affected with 160 deaths, while there were 152 deaths in Swansea. Holywell and Denbigh also suffered high death tolls.

A second epidemic occurred in 1848, which caused even more deaths. In Wales, Merthyr was hardest hit, but Cardiff and Swansea suffered as did smaller towns like Carmarthen and Neath.

A third epidemic hit Britain in 1854, but this time only 20,000 died. It was during this epidemic that Dr John Snow finally made the link between cholera and contaminated water supply. The building of sewage systems and of clean water supplies in the late 19th century greatly reduced the risk from cholera. 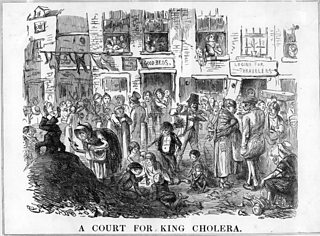 A cartoon from 1852 entitled "A Court for King Cholera"

Typhoid was another bacterial infection that spread through contaminated food and water. It was caused by poor sanitation and lack of cleanliness, eg not washing hands and clothes.

It developed more slowly than cholera, but could also be fatal. Between the 1830s and 1860s typhoid claimed many lives across England and Wales, particularly among the poor. In 1879, an outbreak in Swansea killed 100 people.

In 1882, 42 people died in Bangor. The clothes and bedding of the dead were burned, though this did nothing to end the outbreak. The local health board insisted that miasmas were the reason for the outbreak.

In fact, the cause was contaminated water, from a farm, entering the newly-built reservoir that was meant to bring clean water to Bangor. In 1884, the typhus bacillus was identified. A combination of better sanitation and hygiene has reduced the risk of typhoid, though there are still occasional cases.

By the end of the 19th century, therefore, knowledge of what caused disease and illness had improved considerably. Improvements under the Public Health Acts, vaccination against diseases like smallpox and better personal hygiene had helped to combat illness and disease. However, many problems remained.