Industrial disorder during the Industrial Revolution

There was an increase in protests and riots during the 19th century and the causes and motives of these varied.

Some focused on getting political rights, others were a reaction to the enormous changes of the Industrial and Agricultural Revolutions.

Many of these examples of disorder were of great concern to the Government. Across Europe revolutions were threatening the elite ruling classes. The British Government had seen the brutality that followed the French Revolution of 1789 and were determined to crush any form of protest or disorder. 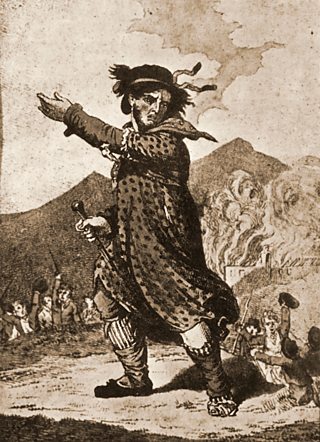 Luddites were named after a man called Ned Ludd, who it was claimed lived secretly in the forest. He may well have been a mythical figure

New machinery was introduced into textile mills. The machinery produced cloth quicker and far more cheaply than weavers could do in their own homes.

In 1811, gangs of weavers smashed up 1,000 new machines in Nottingham and Derbyshire. Between 1812 and 1813, similar groups began smashing factory machinery in Yorkshire and Lancashire. They attacked at night.

The Luddites' protest failed. The Government sent in soldiers, who fought a gun battle with the Luddites near Huddersfield in June 1812. In 1813, 14 Luddites were hanged. The movement fizzled out by 1813.

In 1838, a meeting in Birmingham drew up a list of six proposed changes to the voting system. The proposals included votes for all men over 21, secret voting, annual elections, equal constituency boundaries, and pay for MPs.

This list was called the People's Charter. The people who supported the demands were known as Chartists.

The Chartists drew up a petition to show the support for their changes. They presented it twice to Parliament, but each time it was turned down. 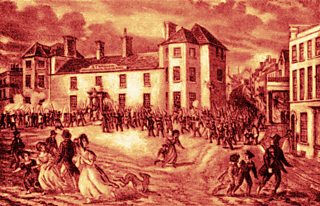 The Newport Rising, 4 November 1839. Chartists march on Newport to release fellow Chartists who had been taken prisoner in the Westgate Hotel

The movement turned violent. In Llanidloes, Powys in April 1839, a peaceful protest by weavers turned violent when three leaders were arrested. The angry mob broke into a local hotel and freed the leaders and gained control of the town. After five days, troops were sent in and 33 Chartists were punished.

In Newport in 1839, 3,000 iron workers and coalminers met to show their support for the Chartists. Soldiers opened fire and 20 Chartists were killed. 500 Chartists were imprisoned and the leaders were sentenced to death at Newport, but were transported to Australia instead.

Chartism died down after a final failed attempt to present a petition to Parliament in 1848. 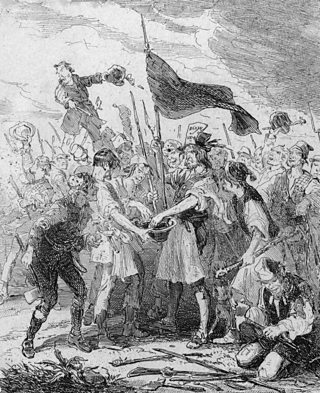 From 1-7 June 1831, there was an armed insurrection in Merthyr Tydfil. The rebellion was caused by unemployment, low wages and the confiscation of property.

Between 7,000 and 10,000 rebels raised the red flag of rebellion and took over much of Merthyr Tydfil. Violent clashes occurred, with troops sent by the Government to regain control.

26 people were put on trial, several were transported but only Richard Lewis, known as Dic Penderyn, was executed.