The abundance is the number of organisms in an ecosystem and their distribution is affected by abiotic factors. These are factors that are non-living. They include:

Many orchids, which are also kept as houseplants, grow on trees in the rainforest and have evolved for optimum growth in darker conditions. If you were to put an orchid on a bright windowsill and a cactus in a dark corner of your room neither plant would grow well.

Both animals and plants have evolved to grow healthily at their optimum temperatures. If you planted either your cactus or orchid houseplants outside in cold temperatures, they would die. Similarly, animals that have evolved to live at the North Pole, such as the polar bear, could not survive in warmer conditions.

More people kill houseplants by overwatering than by under-watering them. Many plants cannot survive in waterlogged soils. Their roots are unable to respire, they rot and the plant dies. Other plants, such as pitcher plants, grow best in bogs where the moisture levels are high. Soil moisture meters can accurately determine how wet an area is. 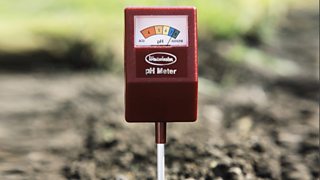 pH meters can accurately determine the pH of soils.

The pH of water can also affect the aquatic organisms that are found there. Different species have evolved to survive at different pH levels found within water.

Many plants require high levels of soil minerals to grow well. An example of this is magnesium, which is required to produce chlorophyll. Plants with unnaturally yellow leaves may have a magnesium deficiency. Carnivorous plants, such as pitcher plants, have evolved to catch insects to supplement the low levels of minerals found in the soils in which they grow.

Carbon dioxide is a reactant in photosynthesis which means plants need it to survive. Areas with higher levels of carbon dioxide are more likely to have healthy plants growing. Farmers often release carbon dioxide within their greenhouses to maximise their crop yield. Woodlands often have higher carbon dioxide levels than open grassland, so many plants living in open areas have evolved mechanisms to overcome a shortage of carbon dioxide.

Oxygen from the air and oxygen produced by aquatic plants dissolves in water. Without this, aquatic animals would suffocate and die. Healthy lakes and rivers have high levels of oxygen, and polluted waters often have low levels of oxygen. This pollution means that only certain species can survive there such as sludgeworms. These are bioindicator species because their presence or absence informs us about the condition of the habitat.

These are bioindicators of oxygen levels within water.

Air pollutants such as sulfur dioxide are released from the burning of coal. Lichens cannot survive if the concentration of sulfur dioxide is too high. So lichens are considered to be indicator species for air pollution. If the air is clean there will be lots of lichens so that if the city and countryside are compared, there will be more lichen species further away from the city centre.