Ghana is an emerging and developing country (EDC) located in western Africa with a rapidly increasing population. In 2008 it was 23 million and in 2013 it had risen to 26 million. The country has lots of fertile land, but still suffers from food insecurity.

Ghana has put measures in place to increase food supplies.

In Ghana the percentage of farmland equipped for irrigation is just 0.01% of the arable land. This figure has not changed since 2008. There are 13 completed irrigation projects in Ghana covering 325 hectares.

Where water is in short supply, farmers can bring in water to increase their yields. The supplies are reliable and thus have positive economic and social benefits, eg less rural to urban migration. On the negative side, soils are leached and degraded, river and lake habitats are reduced, and underground water levels can be depleted.

The Kpong Irrigation project in Ghana covers 616 hectares of farmland about 100 km from Accra. Crops that can now be grown include aromatic rice, onions, chillies, carrots and okra. Water is brought from two catchments - the Volta and the coast because the project was built on the watershed.

There is more food being grown and farmers' incomes have risen. However, the canals have eroded and silted up because maintenance is expensive.

Urban farming is a recent initiative, whereby residents grow food on patches of land near where they live or work. The scheme is sustainable, in that local people have control over decisions and the initiative is manageable.

About 1,000 people earn their living from small urban gardens in Accra. They are important in supporting food security in the city.

In 2012, Ghana signed up to a G8 initiative called the New Alliance for Food Security and Nutrition. They decided to focus on five crops: cowpea, maize, cassava, rice and yam. The government invested in 42 new high-yield variety seeds (HYV) for their focus crops, plus others such as groundnut and soybean. They also introduced inorganic fertilisers, built grain warehouses and provided training for farmers. 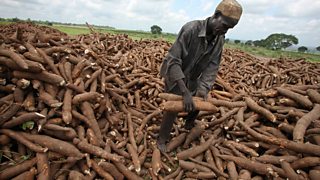 Cassava yields in Ghana have improved under the new initiatives

Ghana had previously attempted to achieve food security with the Green Revolution. In the 1960s and 1970s, the Green Revolution techniques in Asia and South America had years of success, with yields increasing up to three-fold. Farmers used new varieties of seed, and needed much fertiliser and irrigation.

When the same approaches were tried in Ghana, farmers did not see the same yield increases. Most of Ghana's farmers could not afford the seeds, or fertiliser and irrigation costs.

The recent Green Revolution projects in Ghana have support and financial funding from the government and non-governmental organisations (NGOs) . The funding can help farmers to pay the ongoing costs of using genetically modified crops and paying for the labour intensive technologies.