In the 18th century the principal traders were Britain, Portugal and France. More than seven out of every ten slaves went to regions owned by Portugal and Britain. Military strength and control of the trade were intertwined.

At this time governments restricted which ships could trade with their colonies. Each European power restricted trade within their colony to benefit their own merchants. Conquest of colonies in the Americas led to an increased share of slave trading.

Initially, Spain dominated the West Indies including Cuba and Jamaica, while Portugal and the UK controlled smaller islands

The UK and France took over many parts of the West Indies from previous Spanish rule including the key colonies of Jamaica and St Domingue.

In the 1660s and 70s, Britain adds several smaller islands to its colonies - including Barbuda and Antigua

Spain loses the Bahamas to Britain.

Britain takes control of Turks and Caicos from Spain, and Trinidad and Tobago, Bermuda and other islands from France.

From 1518 the Spanish introduced a licence, the Asiento, to supply a given number of slaves. The Spanish authorities sold the Asiento to the highest bidder, and the money went to the Spanish king and queen. The merchant who bought the licence could buy slaves in Africa and sell them in the Spanish Americas.

Initially the trade was dominated by the Portuguese, later to be joined by the Dutch. In 1713 a contract was signed giving Britain the monopoly on supplying slaves to the Spanish colonies. Britain had reached this position of dominance in the slave trade through a combination of military and commercial strength.

Conflict in the Caribbean

There were frequent European wars in 17th and 18th Centuries. These were mainly fought on European soil. But there were also battles for control of colonies which were extensions of these rivalries. Naval supremacy became increasingly important.

The balance of power shifted from the defeated nations to the winners. The power of Spain and Portugal declined. In the second stage of the slave trade (before British abolition), Britain and France grew in strength and emerged as dominant nations. This was reflected in the number of slaves they traded.

Although the Seven Years War (1756–63) began as a conflict about control of territory in Europe, major battles were fought for control of valuable overseas colonies. Britain, France and Spain all looked to maintain and build the size of their empires, including the Caribbean and North America. Britain emerged from the war as the leading European imperial power, having made large territorial gains in North America and the Caribbean. Slave labour was seen as necessary to exploit these gains. 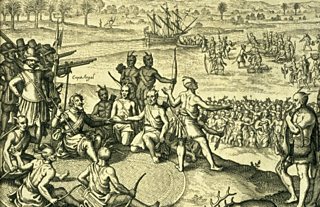 British colonists persuading a tribe of native Americans, the Chickahominies, to join them

Britain entered the race for colonial power in the New World just as slave trading across the Atlantic soared.

In 1650 the British were minor bystanders in the slave trade. By 1700 Britain was emerging as the largest Atlantic slave trading nation, overtaking Portugal.

This development can be explained by the increase in Britain’s military and commercial strength. These two factors supported and encouraged growth in each other.

The amount of British trade depended in the first place on the size of the British Empire. The British gained control of a significant proportion of the West Indian islands in the 17th century. Sometimes Britain seized islands from competing European powers. Britain’s capture of Jamaica from Spain in 1655 proved a great advantage. Jamaica served as a base from which to challenge Spanish power in the area.

Military strength enabled Britain not only to set up and protect its own monopoly in slave trading, but to supply other nations too. Britain was given the Asiento in 1713 as part of the Treaty of Utrecht that ended war with Spain.

By 1760 Britain possessed 23 colonies. As the number and size of Britain's colonies grew, so did the number of British plantation owners and slave traders.

Direct involvement in the slave trade offered Britain some economic security. Selling slaves on to Spanish merchants through Jamaica kept Bristol involved in Atlantic trade when the price of sugar dropped in the 1730s

The military and naval strengths of competing nations were important factors in slave trading success, but it was not the only factor.

In the first half of the 18th century the British Atlantic community became more integrated, allowing the trade in slaves to flourish.

This, in part, depended on Britain:

The Royal African Company’s monopoly over British slave trading was abolished in 1712 allowing merchants in the rival ports of Bristol and Liverpool to compete for business. This added to the growth of trade. In the 1790s the slave trade developed to its fullest extent.