On Sunday 10 November, the nation will pay its respects to the fallen as Remembrance Day is marked. The members of the armed forces who gave their lives across conflicts through the years will be honoured, as will those who survived and the others who continue to support them.

We take a look at some of the unique words and phrases that we often hear in association with this special occasion.

The First World War led to many thousands of British soldiers losing their lives on the Front. With none of the fighting taking place on home soil, when the conflict ended in 1918, paying respects to soldiers where they had died meant visiting the locations of the Western Front trenches in France and Belgium.

London's Cenotaph was built in Whitehall in 1919 to remember those who had died in the war between 1914 and 1918. The reason it’s called a Cenotaph is because the name describes a monument to honour of those who died and are buried in another location and comes from the Greek word for ‘empty tomb’. It was designed by the architect Sir Edwin Landseer Lutyens and was only intended to stand in place for a week in recognition of the first Peace Day celebrations in July 1919.

But it was a popular part of the celebrations, so much so that a permanent version was ordered. Built from Portland stone (the original was a temporary structure formed of wood and plaster), it was in place to be unveiled by King George V on Armistice Day 1920. Ninety-nine years on, it remains a centrepiece of Remembrance Day in the United Kingdom.

When you wear a poppy in memory of those who fell, you’re also supporting the work of the Royal British Legion. Established on 15 May 1921 (the ‘Royal’ was added to the name on its 50th anniversary in 1971), its intention was, and remains, looking after service personnel while they’re in action and also long after they’ve hung up their uniform.

That help was needed in 1921 as four years of war had had a detrimental effect on the British economy. Unemployment stood at two million and many had returned from the front with little prospect of gainful employment. This impacted even more on the soldiers who had sustained life-changing injuries and of the six million who fought, 1.75m returned with a disability of some description. For half of them, those injuries left permanent damage.

Legion is a fitting name. Although it dates back to the Roman army, with specific military reference to an infantry between 3,000 and 6,000 troops, in later years it has come to refer to a large multitude of people, as the Royal British Legion is.

The first Poppy Appeal was in 1921 and raised more than £100,000. This was a vast sum at the time and was used to help the war veterans who desperately needed it. That help has been ongoing ever since.

To find out more about the history of the poppy in Remembrance Sunday, see this article from CBBC's Newsround.

The March Past is one of the fixtures of the Remembrance Day service and is also organised through the Royal British Legion. Veterans from all areas of the Armed Forces march in uniform, grouped into their respective organisations such as the Army, Navy and Royal Air Force. The March Past follows the 11am service of Remembrance and involves up to 10,000 veterans from World War Two and other conflicts marching past London's Cenotaph each year.

During the March Past, a member of the Royal Family will take the salute from the veteran organisations. In 2018, this role was carried out by Princess Anne, the Princess Royal.

There is a high level of organisation involved, including the order in which the various organisations march. With many veterans now in their seventies, eighties and even nineties, the number of marchers is capped at 10,000 to ensure nobody has to stand for longer than is necessary.

An armistice originally meant a brief truce or ceasefire between warring factions, with the Oxford English Dictionary listing references which date back to 1677.

It now refers to a complete end to hostilities, as happened in November 1918 when World War One came to an end when France, Great Britain and Germany signed an armistice at 5am on a train in the Forest of Compiegne in France. It was an agreement between to end conflict between them. In reality, the war continued beyond this date as the peace negotiations continued, but it remains the defining moment when more than four years of fighting came to an official end.

The number 11 is significant on Remembrance Sunday because it features many times in the circumstances surrounding the 1918 armistice. It was agreed that hostilities would officially cease at 11am on 11 November. In other words, it’s the 11th hour of the 11th day of the 11th month of the year.

The two-minute silence held around Britain every Remembrance Sunday to respect those who gave their lives begins at 11am for this reason.

A symbolic gesture was made in 1920 to bring one member of the armed forces, buried in an unmarked grave on the Western Front, back to a grave on British soil.

The idea came from reverend David Railton who had spent time on the World War One frontline as a chaplain. He believed this would commemorate those who would not be coming home from battle, especially if the place where they fell could never be known.

There is no definitive version of how the Unknown Warrior came back to Britain, but the one most experts seem to agree on is this. Between four and six bodies were exhumed from different parts of the Western Front, all areas that saw heavy British battle. On 7 November 1920, the bodies, each covered in a union flag, were brought to the chapel at St Pol in northern France.

Brigadier General LJ Wyatt, the commander of British troops in France and Flanders, selected one of the bodies at random. The ones that weren’t chosen were reburied while the solitary selected figure was repatriated via Dover on the HMS Verdun. The number of bodies involved in the selection process is disputed, with some accounts saying four, others six.

It was a letter in the London Evening News which first proposed the possibility of paying respects to those who gave their lives in war with a short period of silent, respectful reflection.

Australian journalist Edward George Honey penned the letter which appeared on 8 May 1919, just over six months after the 1918 armistice. When King George V became aware of the idea, he was in full favour and made a Royal Proclamation that a two minute silence should be observed.

It happened for the first time at 11am on Thursday, 11 November 1919, the very first Armistice Day - what we now call Remembrance Day following World War Two.

A two minute silence has been observed on Remembrance Day ever since.

For those who cannot attend the Cenotaph to pay their respects, or make it to a remembrance service closer to home, the National Service of Remembrance has been broadcast from London nearly every year by the BBC since 1928.

The corporation’s first Director General, Lord Reith, had long been keen to bring the country together in a shared act of remembrance in this way. Negotiations with the Home Office made it possible for the first time in 1928 when an outside broadcast was made from the Cenotaph for BBC Radio.

The only time the National Service of Remembrance has not been broadcast was during the suspension of programmes for World War Two. Former Question Time host David Dimbleby is currently the BBC’s commentator for the event. 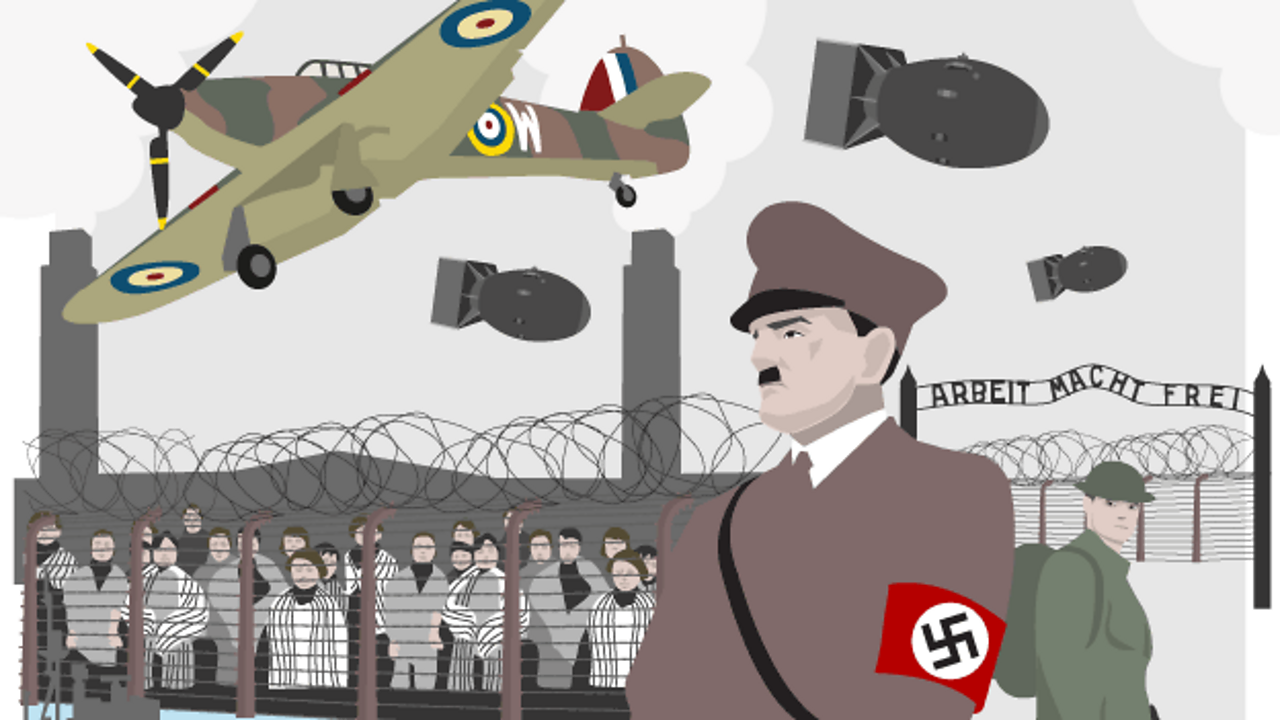 If you want to learn more about the blackouts in World War Two that lead to the success of catseyes, click here. 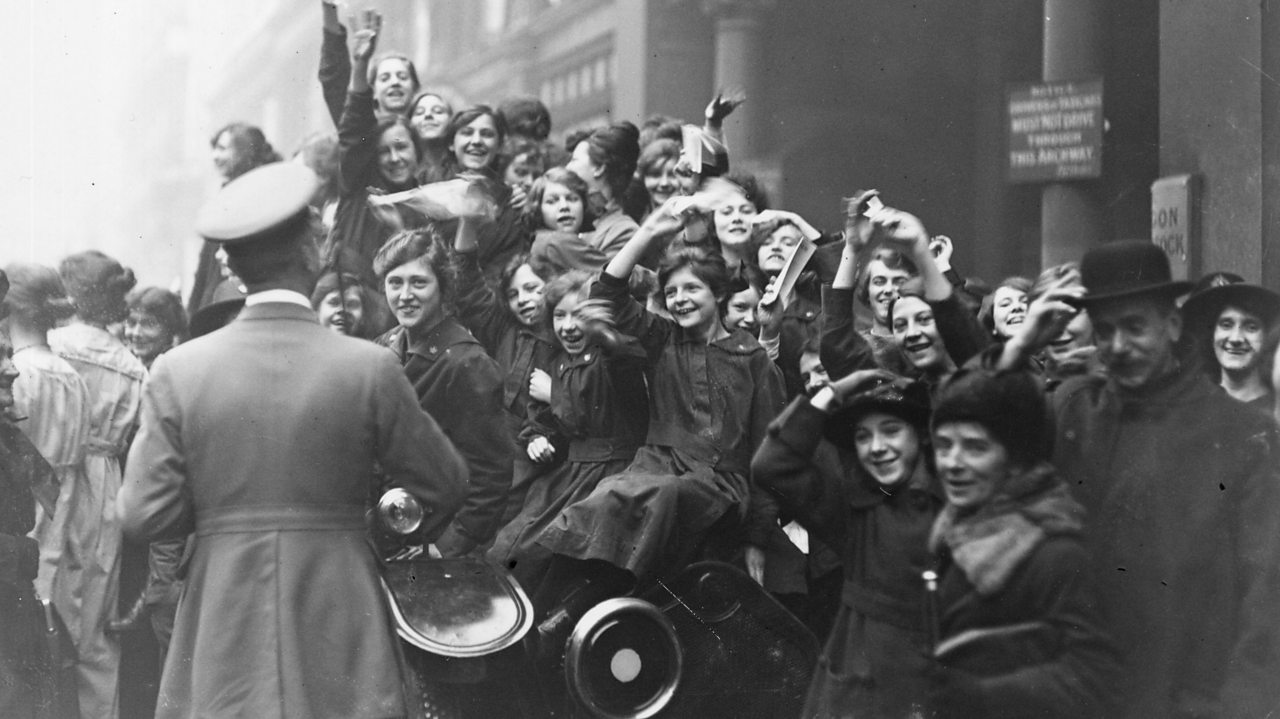 Quiz: What happened after World War One?