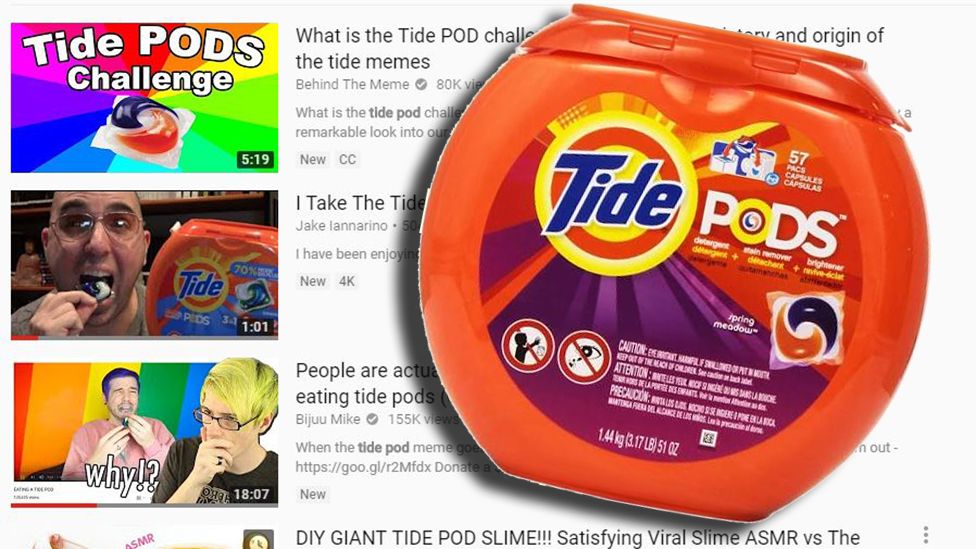 YouTube says it will remove videos of people taking part in the 'Tide Pod challenge', a dangerous craze proving popular in the US.

Tide is an American brand of laundry detergent that uses pods covered by plastic which dissolve in the washing machine.

Some people have been chewing or swallowing them and posting videos online.

Videos will be removed when they are flagged by users, YouTube says, and the channel in question will have its access to the site limited for three months as a result of the strike.

"We work to quickly remove flagged videos that violate our policies," a YouTube spokesperson said in a statement.

'They should not be played with'

The craze has been linked directly to an unusually high number of poisonings being reported in the US so far in 2018.

In the first 15 days of 2018, 39 people between the ages of 13 and 19 contacted the American Association of Poison Control Centres (AAPCC) to report issues of intentional poisoning.

Swallowing Tide pods were related to 91% of these, according to the the AAPCC.

In comparison, there were only 39 reports of intentional poisoning in this age group in both 2016 and 2017.

People who swallow pods could suffer seizures, pulmonary edema (excess fluid in the lungs), breathing difficulties, coma, or even death in extreme cases, they warned.

Procter & Gamble, which manufactures Tide, says its pods "should not be played with, whatever the circumstance, even if meant as a joke".

"Laundry pacs are made to clean clothes. Like all household cleaning products, they must be used properly and stored safely."

Earlier this month, Tide warned people against the challenge in a video shared online.

They said that the pods are for "doing laundry. Nothing else."

"The 'laundry packet challenge' is neither funny nor without serious health implications," says Stephen Kaminski, the executive director of the AAPCC.

"The intentional misuse of these products poses a real threat to the health of individuals.

"We have seen a large spike in single-load laundry packet exposures among teenagers since these videos have been uploaded."