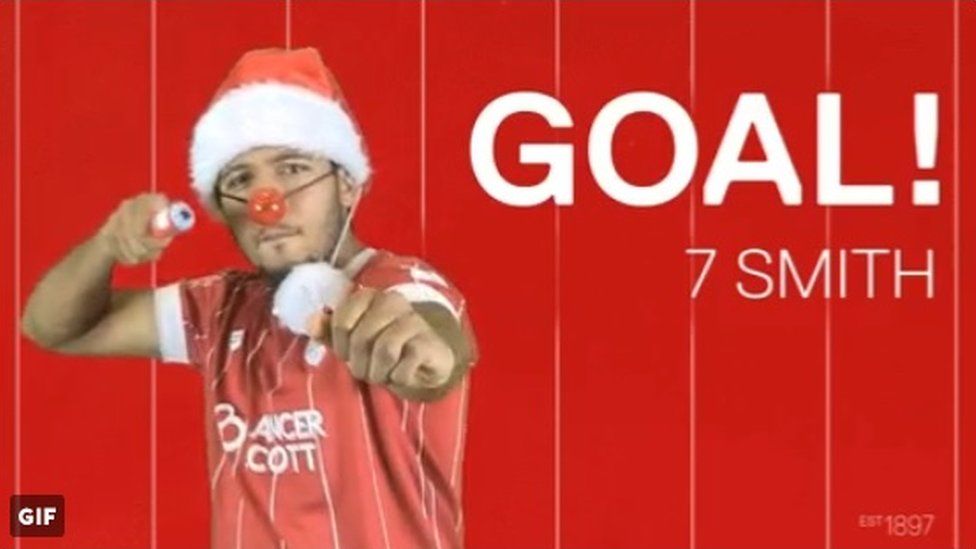 Bristol City have knocked Manchester United out of the Carabao Cup after a dramatic 2-1 win.

And, for the Championship side, the result could mean only one thing - tweeting out two specially-created festive gifs.

After every goal this season, the club's been posting a short clip of the scorer - doing anything from DJing on plates to brushing their teeth.

It's become a bit of an online sensation.

The gifs on Wednesday night were given a festive makeover. Firstly, there was Joe Bryan's opener on 51 minutes.

The original idea stemmed from the Bristol Flyers basketball team - which has the same owner as the football club.

In pre-season, the footballers were asked to celebrate to camera and the gifs were made.

"Some were a bit more outgoing than others," Adam Baker, Bristol City's head of media and communications told the Times.

"But we scored eight goals in our first two games, seven different goal scorers, which meant seven different gifs going out, and within a week it had become a bit of a craze - everyone was talking about it."

Here are some early examples from the beginning of the season, starting with winger Jamie Paterson.

We're not really sure what sort of dance defender Aden Flint is going for in this next one. But we like it.

Of course, then came the props. Here's one featuring midfielder Bobby Reid from Bristol's win over Fulham on Halloween.

And, from then on, the floodgates were open. Here are three solid efforts from Aden Flint.

We admire the dedication of the plate holder in this one.

And the next logical step is to brush your teeth, of course.

Finally - the best of the lot.

Not to be outdone, striker Marlon Pack cracked out the iron.

And we'll finish on this, again from winger Jamie Paterson, which speaks for itself.