How to spot fake Yeezy trainers 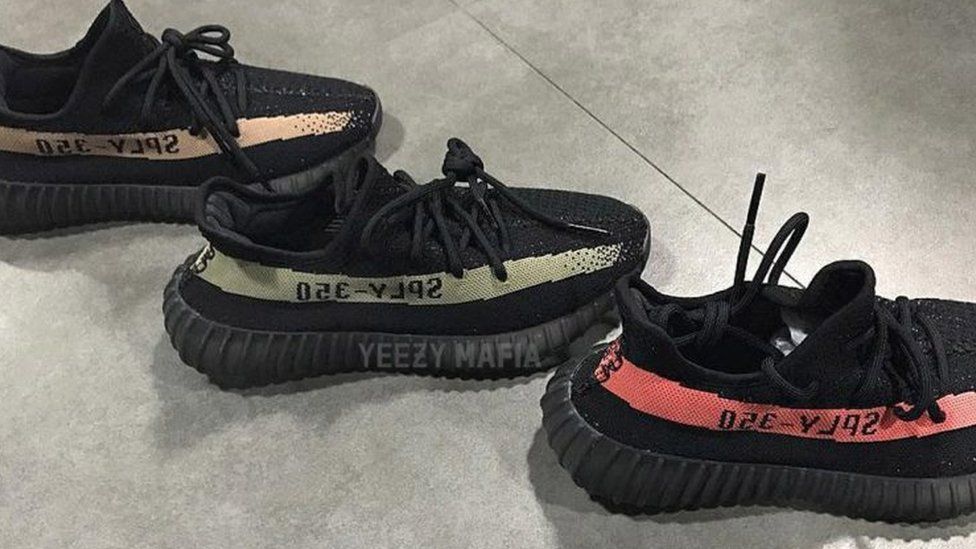 Even to the trained eye, a pair of fake Yeezys can look identical to the real ones.

And unsuspecting shoppers are finding themselves duped into buying counterfeit ones.

Kanye West's collection of trainers are one of the most common items reported to Action Fraud.

The trainers are made in collaboration with Adidas. A rare pair can cost thousands of pounds and they are one of the most sought-after trainers in the world.

They're released on certain dates at specifically chosen locations across the planet. The latest pair, Boost 350 V2 Grey Bold Orange, come out on Saturday.

But there are some tell-tale signs on ones that are fake, says fan website The Yeezy Mafia.

"If you see an offer online that's too good to be true, then you know it's fake," one of its members, who owns 60 pairs, tells Newsbeat. 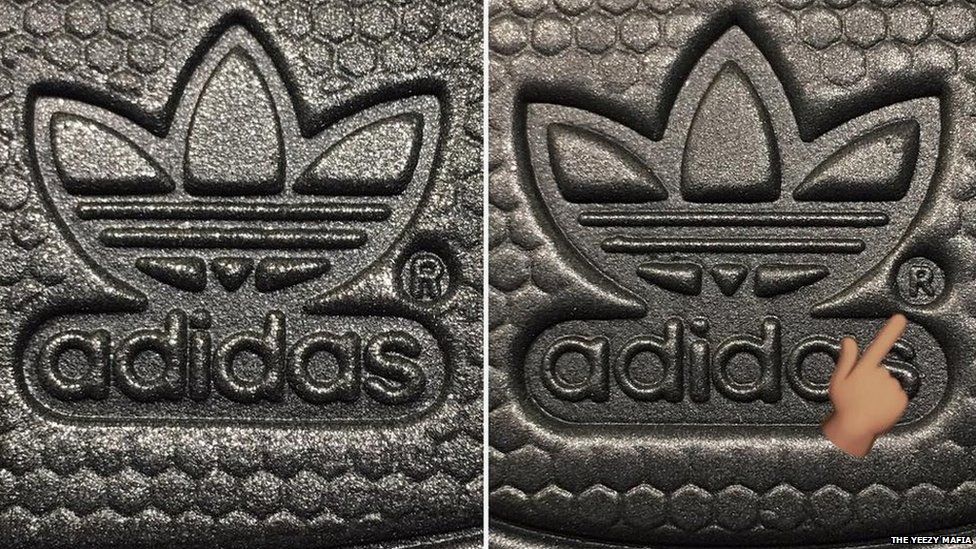 Image caption The real pair is on the left

"Most of the time the real ones are sold by raffle or there are big queues outside of stores when they're released.

"It's the coolest shoe in the world. Everyone wants a pair to flex on other people."

The Yeezy Mafia is made up of 50 members based around the world which provide the latest updates and rumours on Yeezys.

And they've become trained in how to spot fakes. 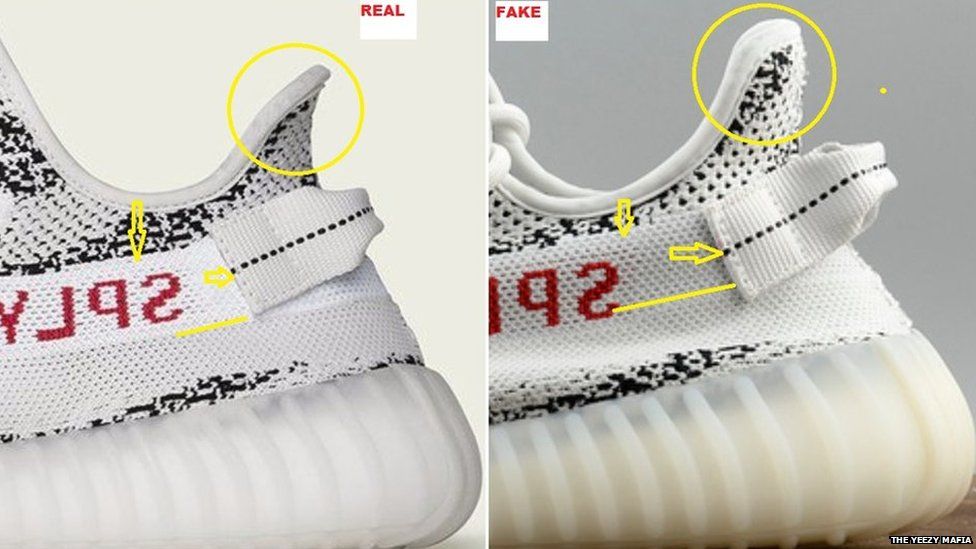 But the counterfeit ones are often so similar to the real deal even they don't get it right all the time.

The group called out Stormzy for wearing what it thought were a pair of fake Yeezy Boost 350 V2 Beluga 2.0s he posted on social media earlier this month.

But it turned out they were authentic.

Jon Wexler, Adidas' VP of global entertainment and influencer marketing, confirmed they were real in a Tweet.

"Why we thought Stormzy had a fake pair was because the text looked to be way too far away from the heel.

"On real pairs, it's closer to the heel, around two or three centimetres," says The Yeezy Mafia member.

For fans hoping to grab a pair, there are three things to look out for when it comes to the fakes.

The material is softer

"The main detail that you have to focus on is the material of the shoes. The bootleg factories, they don't use the real material.

"The material on the real Yeezy is harder and it looks more durable."

The trainers are made using Adidas' Boost technology which is a cushioning system on the sole of the shoe.

"The boost material differentiates from pair to pair on the official shoes." 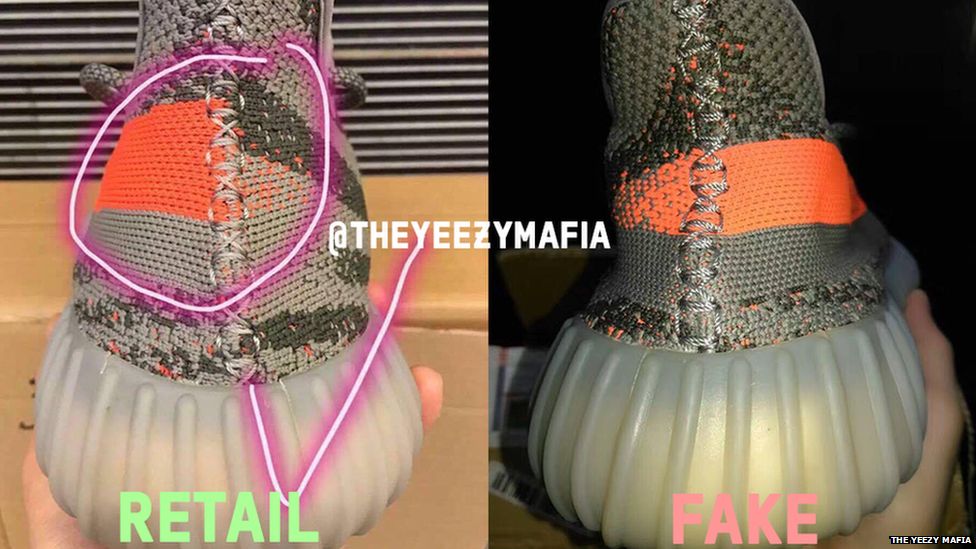 "As long as they don't have the real materials, they can't get the real colours either.

"With the triple white Yeezys, most of the fakes were just all white. While the real pair, they had a subtle cream white shade." 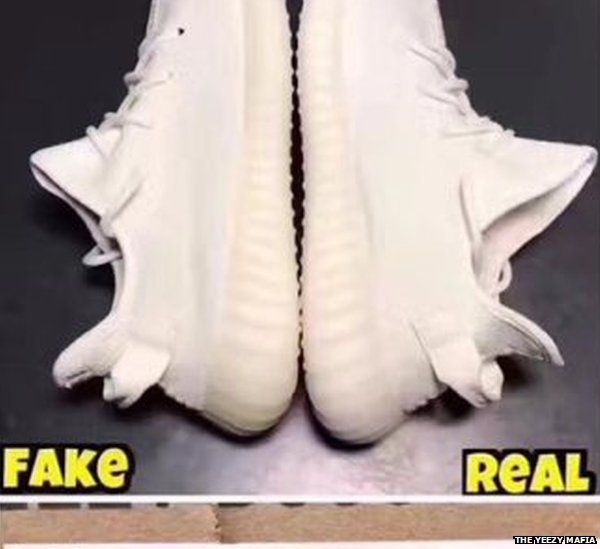 The box looks off

Another way of sniffing out a fake is the box.

"The fake factories don't have access to serial numbers that are put on the box. The serial numbers and the overall designs of the box will look off with a few details." 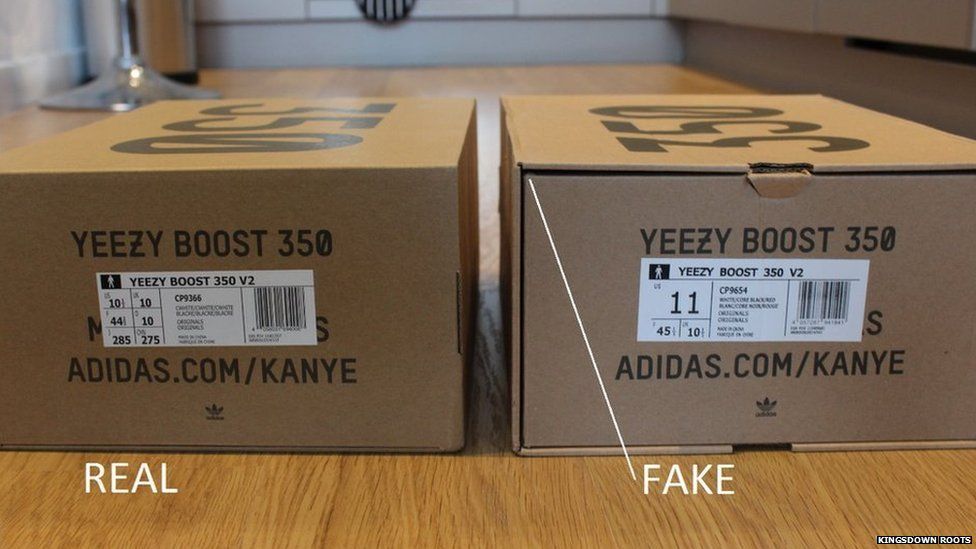