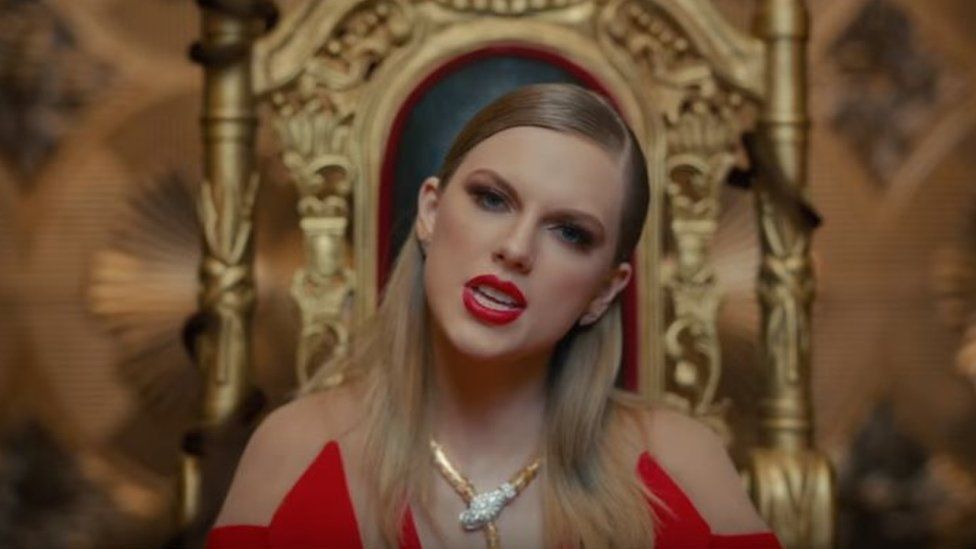 Taylor Swift takes aim at her critics and pokes fun at herself in the video for Look What You Made Me Do.

The new track had its official premiere at the MTV VMAs in Los Angeles and features her darker side leaving her former self behind her.

The single is thought to be aimed at stars like Kanye West and Katy Perry.

The video begins with Taylor Swift dressed as a zombie climbing out of a grave with a headstone reading "Here lies Taylor Swift's reputation". 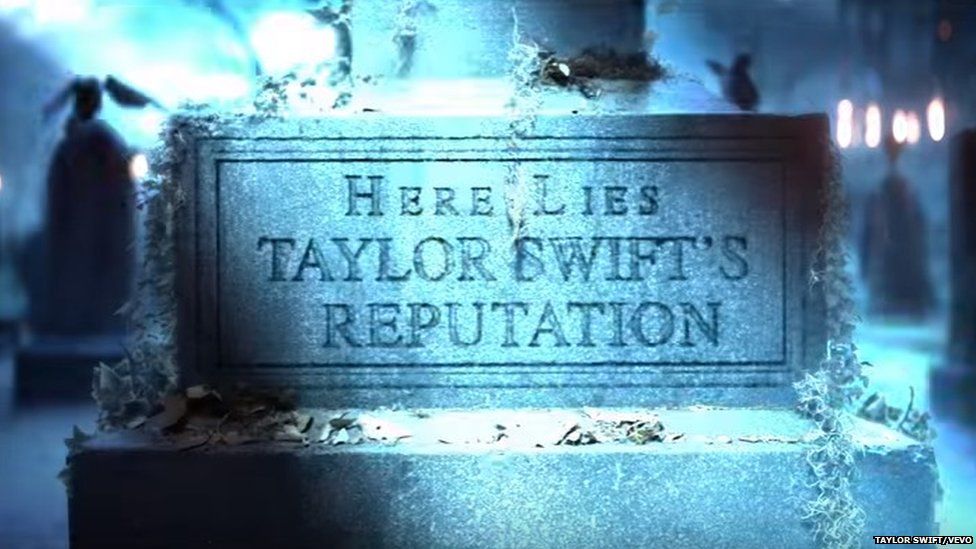 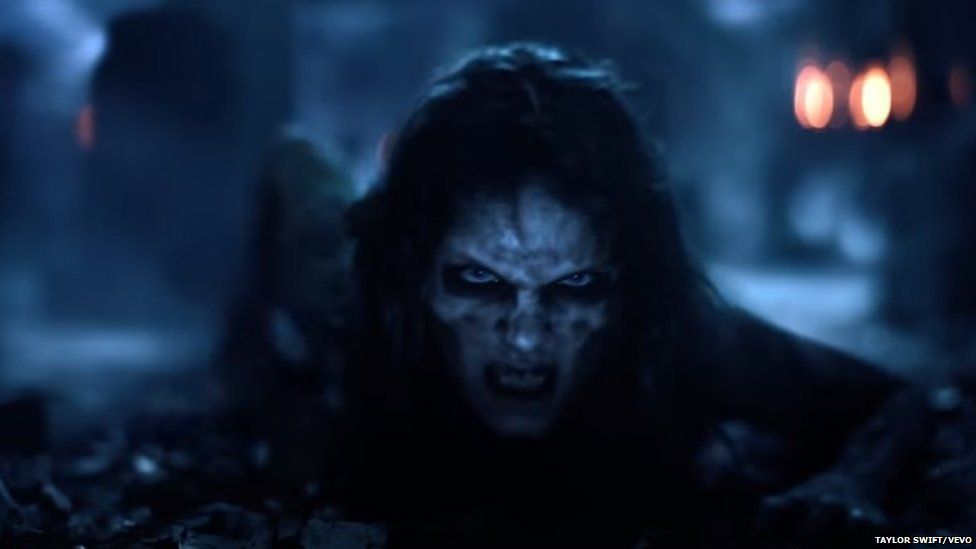 But some fans have criticised her for being shown relaxing in a bath of diamonds, claiming it's a reference to Kim Kardashian's robbery in Paris.

Other people are saying it's a reference to a joke she made when she performed Blank Space acoustically at the Grammy Museum last January. 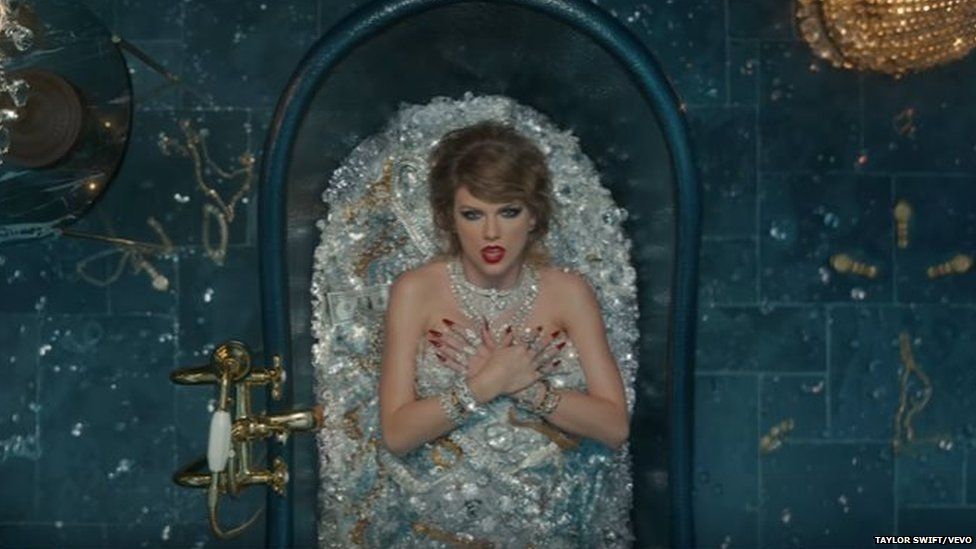 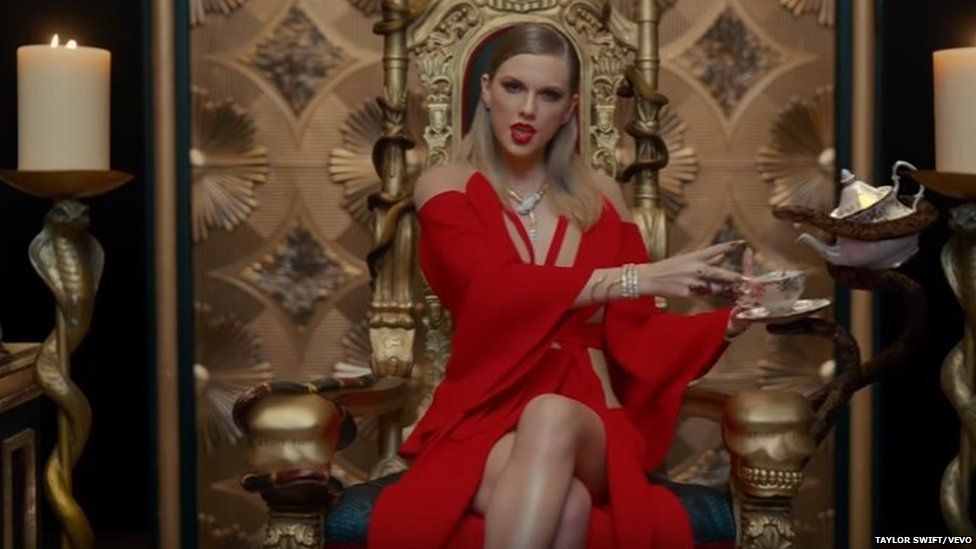 Image caption Taylor Swift's mock throne is slithering with snakes - which have been a feature of her social media campaign for Reputation. The side of it's also engraved with "Et tu Brute" 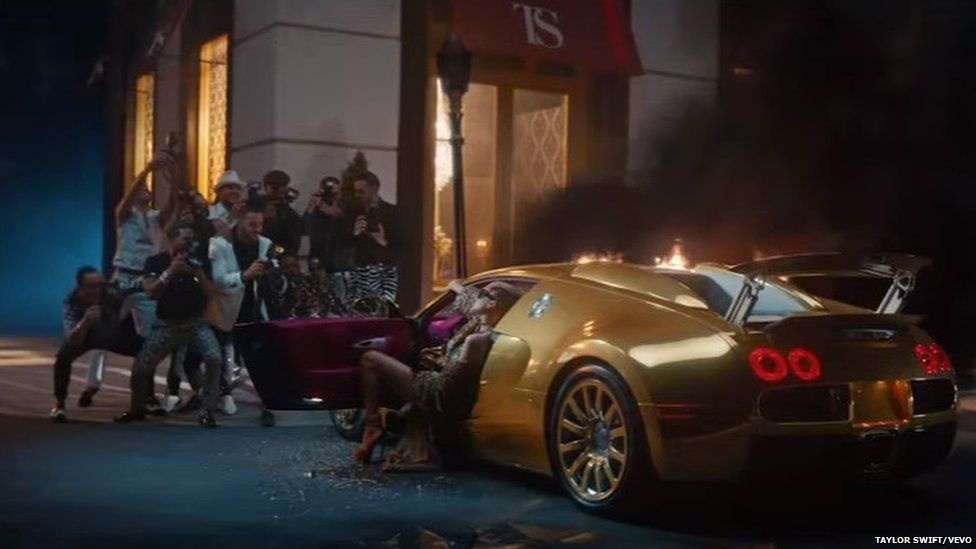 Image caption Fans think this scene could be about Katy Perry - could it be the car in Waking Up In Vegas? 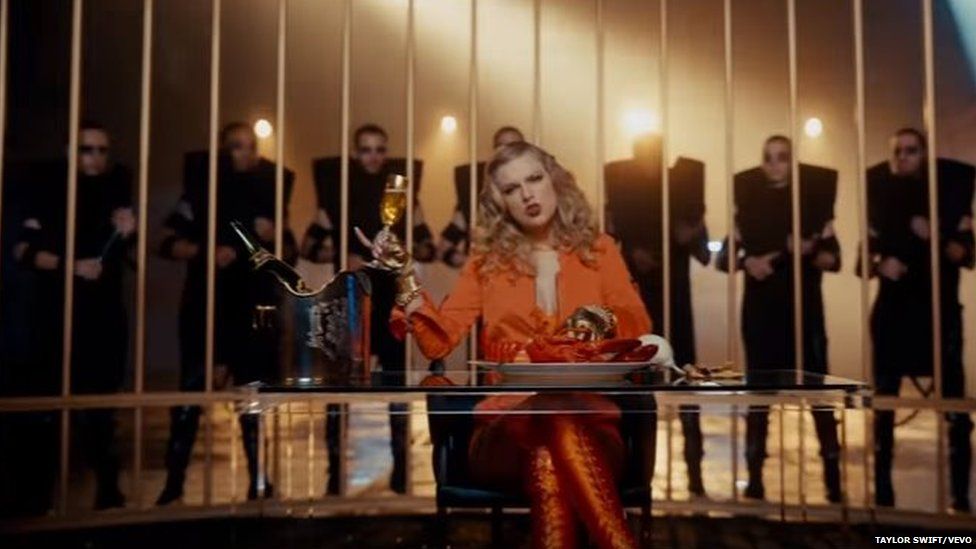 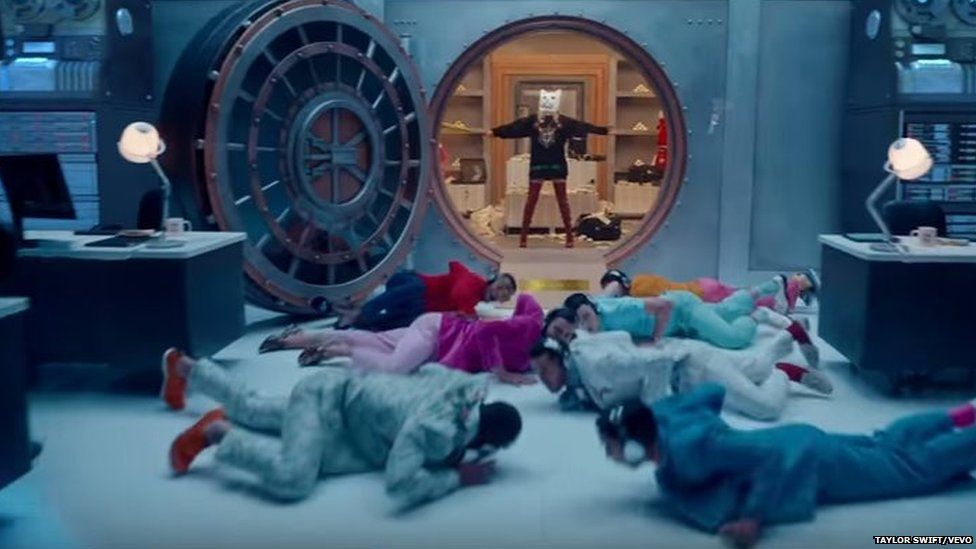 Image caption Some critics think this scene is about her dislike of streaming and being "robbed" of royalties - and are those Katy kitty masks? 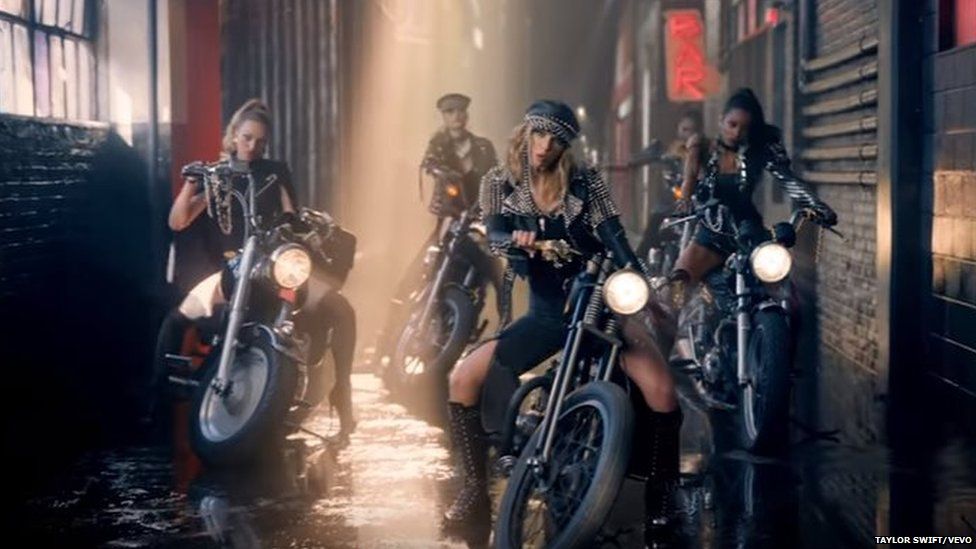 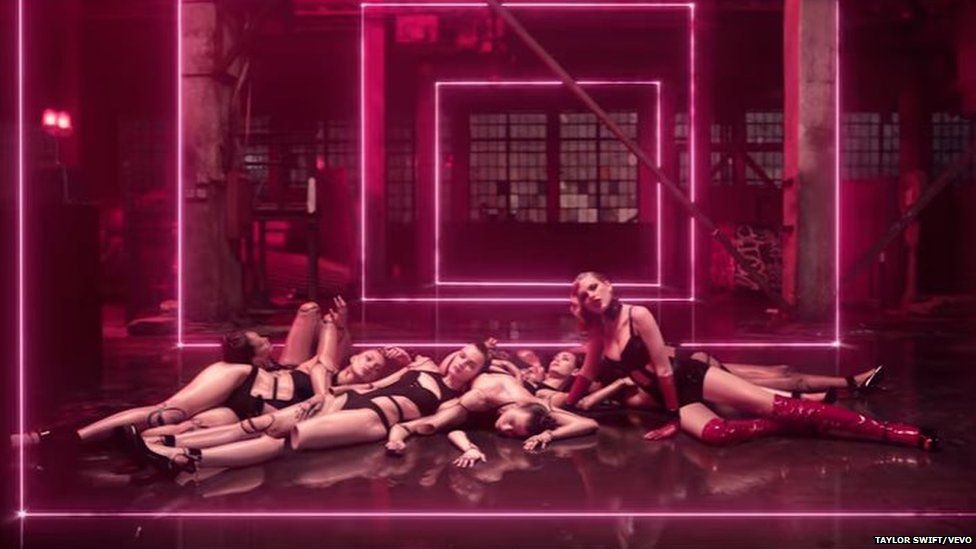 Image caption Is this the Squad? Or is it a criticism of people saying her relationships are fake?

She appears to poke fun at her relationship with ex-boyfriend Tom Hiddleston with her backing dancers wearing tops with "I (heart) TS" on them.

The British actor was photographed wearing a similar vest last year when the couple were going out. 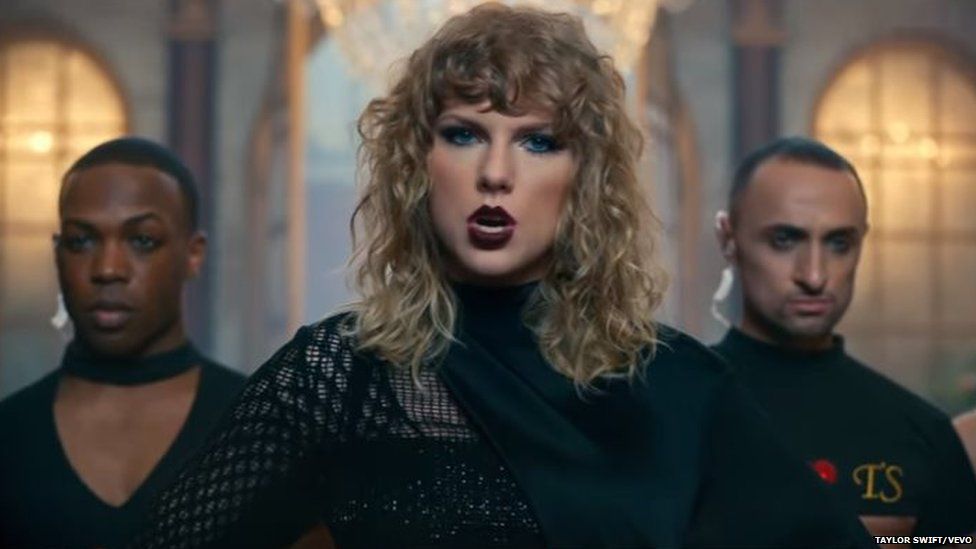 It's after fans compared their videos.

The clip ends in different versions of Taylor Swift, from previous music videos and performances, falling off a slope and into what looks like an abyss. 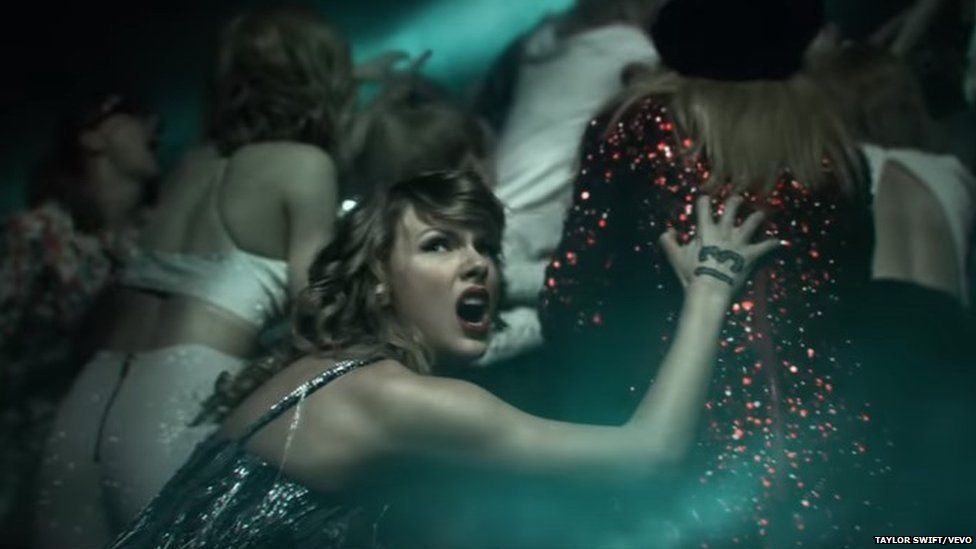 They're then lined up in front of a plane with the name of her new album, Reputation, spray painted across it.

One version of Taylor Swift says to a crying version of herself: "There she goes, playing the victim - again." 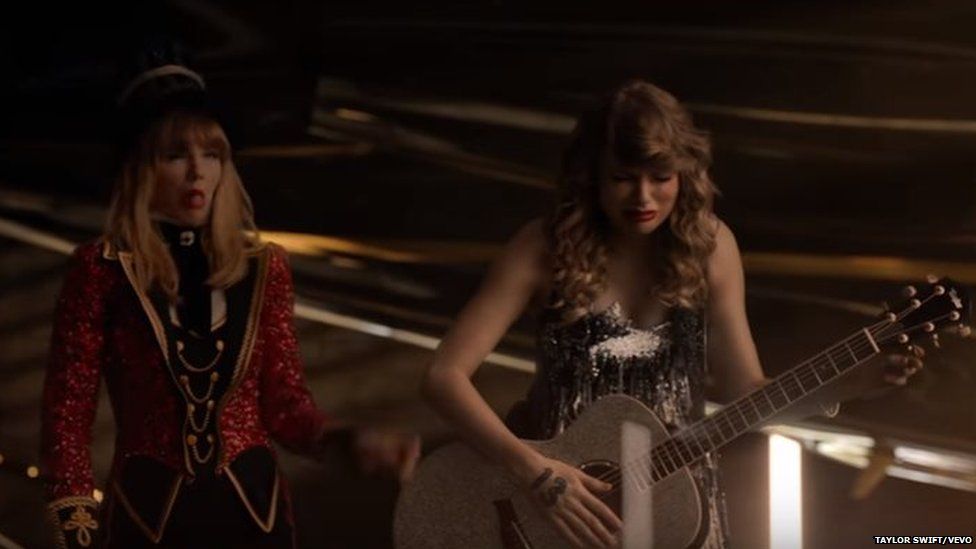 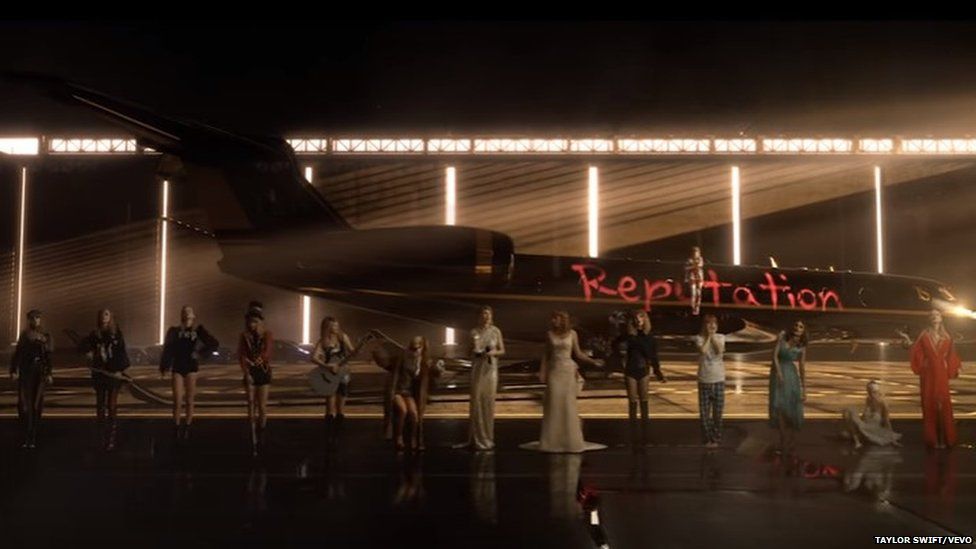 The pop star also mocks the moment Kanye West crashed the stage as she gave an acceptance speech during the MTV VMAs in 2009.

Wearing the same outfit, Taylor Swift repeats words used in a statement given last year in response to a feud with the rapper: "I would very much like to be excluded from this narrative." 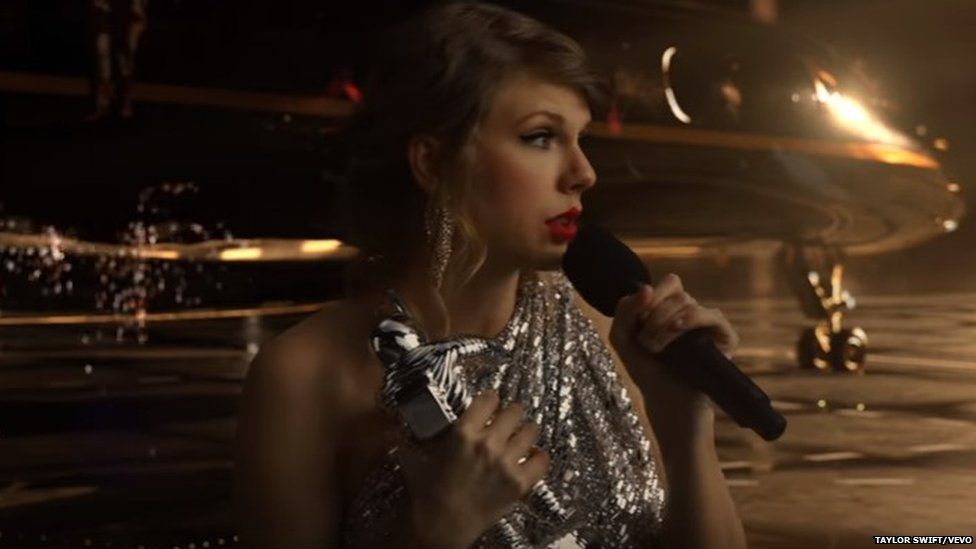 Hours after the music video aired, it's had more than 13 million streams online.

Taylor Swift's new album Reputation, will be released in November.

The release of the track and video came after Taylor Swift wiped her social media channels last week before sharing cryptic videos of snakes on her pages.