'Turn to love' message from Muslims after London Bridge attack 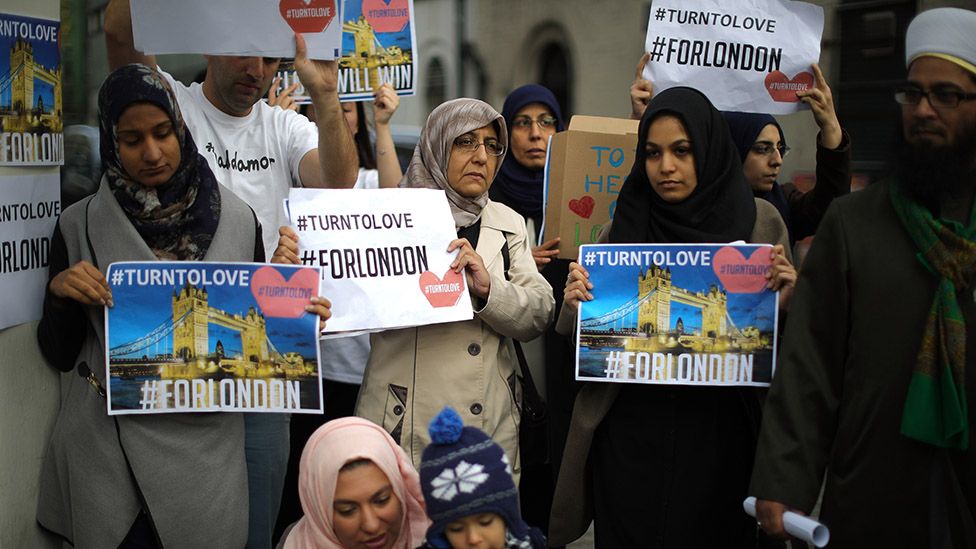 A Muslim woman who lives in the London Bridge area has been describing her anger after terrorist attacks, which left seven people dead and 48 injured.

A van hit pedestrians and then three attackers stabbed people in nearby Borough Market.

Samyna Motalib has lived in the area for 28 years and was caught up in the aftermath.

She describes the attack as "barbaric and inhumane".

Witnesses say the men shouted "this is for Allah" as they targeted people "having fun" on a Saturday night.

A group linked to so-called Islamic state claimed the attack late on Sunday. 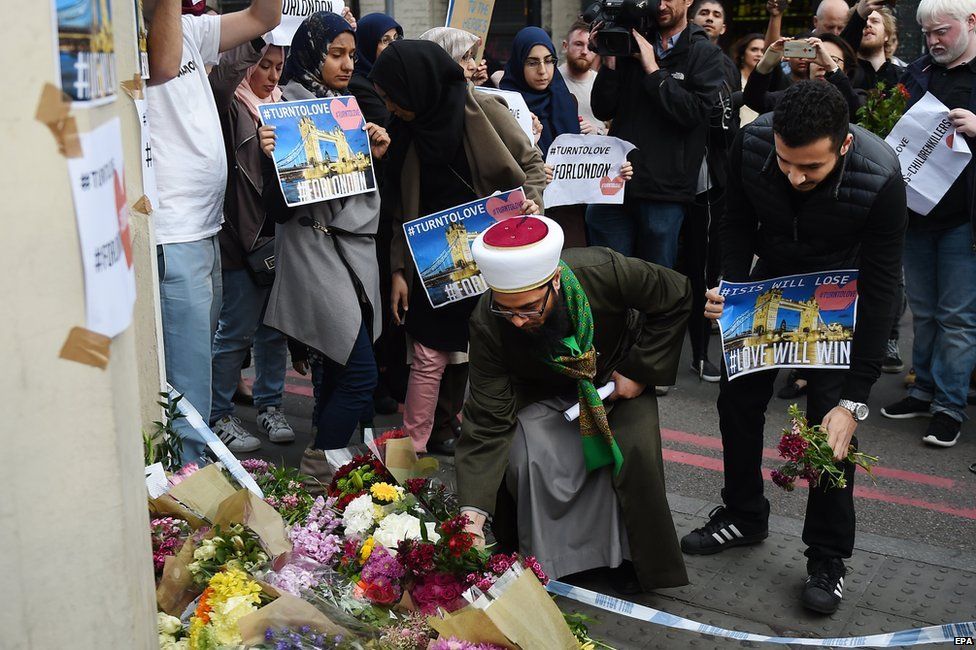 Image caption Mohammad Yazdani Raza, chairman of the London Fatwa Council, and Muslim women hold up signs in solidarity with the victims

Twelve people have been arrested in raids in Barking, east London.

Met Police Assistant Commissioner Mark Rowley said: "Work is ongoing to understand more about [the three attackers], about their connections and about whether they were assisted or supported by anyone else."

I heard this scream. It was literally the most horrible thing you could hear
Samyna Motalib
London Bridge resident

The London Fatwa Council organised a small march at Borough Market on Sunday in solidarity with the victims of the attack.

Samyna Motalib told Newsbeat: "I was walking my normal route home and I see everyone having fun, it's a really fun place to be.

"Just walking through you feel safe being in your neighbourhood.

"All I heard at first was the word 'run'. I just thought it was because everyone was on a night out and there were lots of young people. 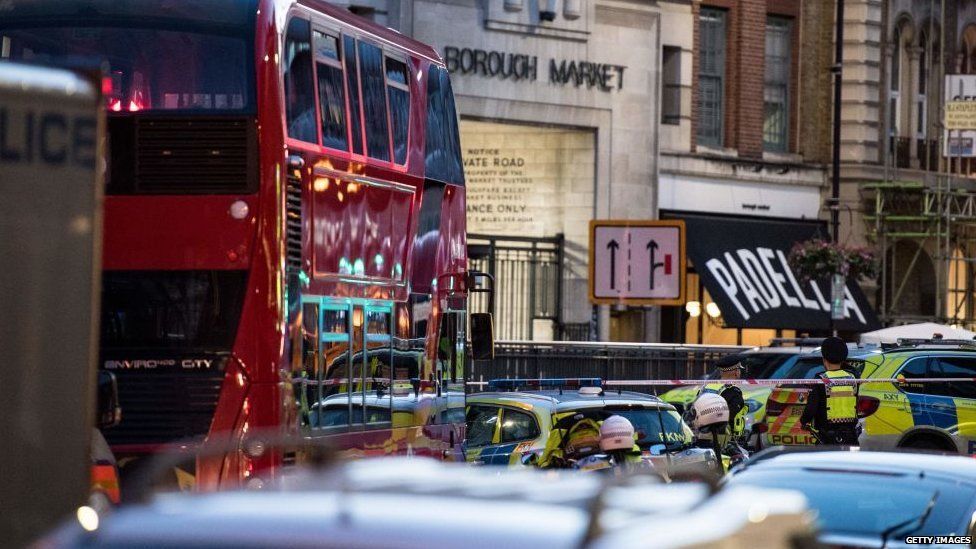 Image caption Samyna has lived in Borough Market for 28 years

"I heard this scream. It was literally the most horrible thing you could hear.

"It seemed like a young girl. She just literally screamed and that scream said it all.

"Everyone just ran. I could see a lot of people leaving their shoes and bags on the floor and everyone was trying to run.

"I had my keys in my hand and had to cut through the market.

"I've never seen so many people run like that, the fear on their faces was crazy." 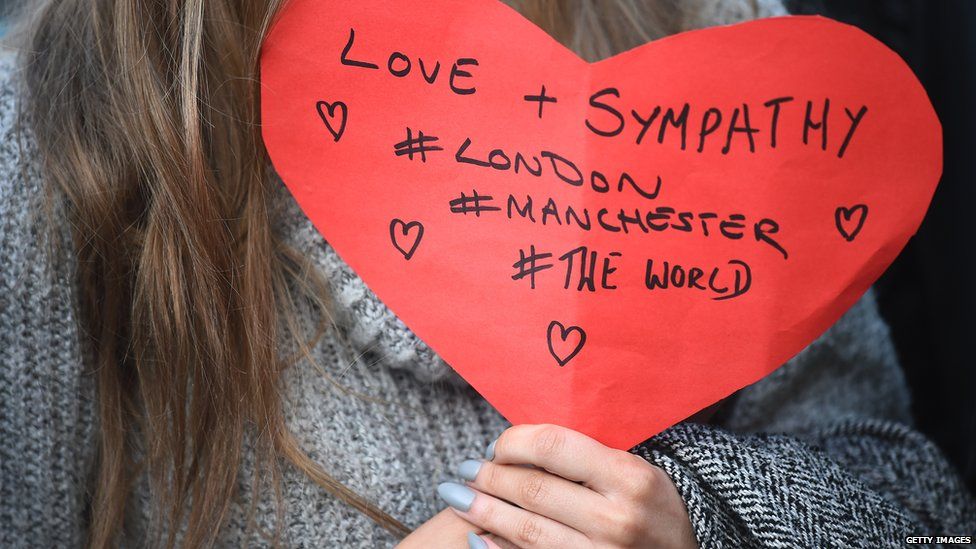 'This is not our religion'

Muslims are marking the holy month of Ramadan, where people take part in fasting, give back to the community through charity and reflect on their lives in the previous months.

"I can speak as a Muslim and say this is not our religion. This does not speak for us. I condemn such barbaric behaviour.

"Muslims around the world are disgusted during this holy month to see such acts being used as part of my religion when it's not. 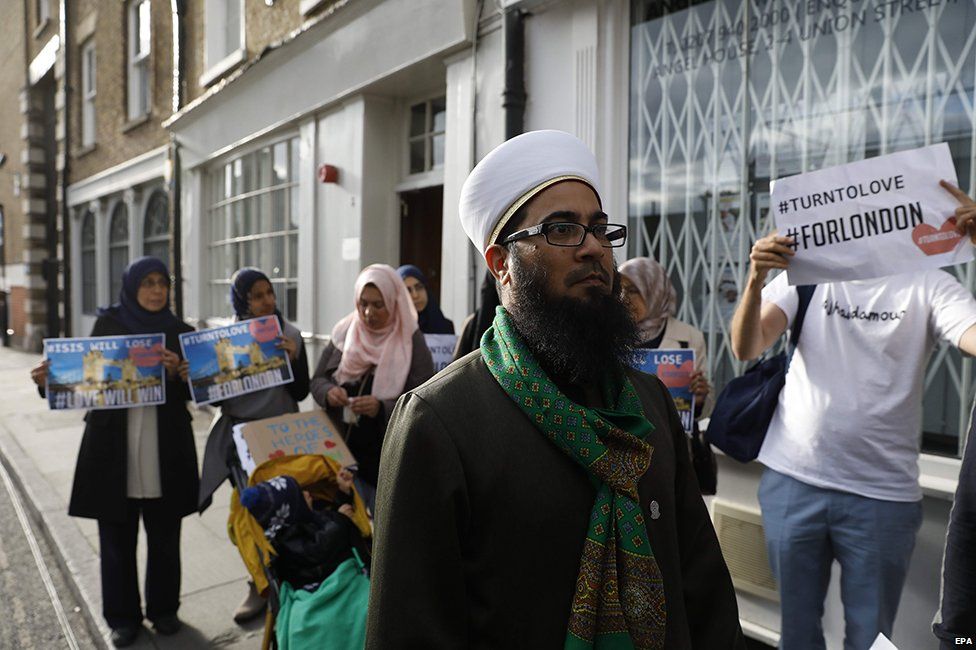 "I have the most respect for the innocent police officers that are risking their lives. I had armed officers telling me to run to my house.

"I have a lot of anger in me, I'm so saddened and disgusted - how can anyone think that's acceptable.

"It could be your mother, sister, brother and this barbaric, inhumane act does not speak for Muslims."