What Arsenal players can expect when they visit Sutton United 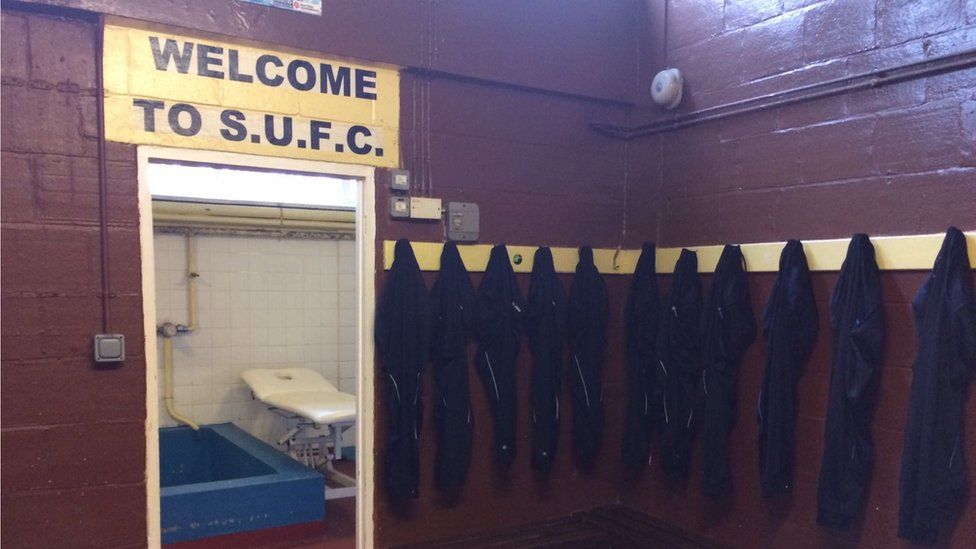 You have a roof over the pavilion to get changed, showers usually have hot water and sometimes there's no mud to worry about.

At Sutton United the pitch is a synthetic 3G surface, with no soil, something that no team plays on in the Premier League or Football League.

The non-league side are looking forward to a dream tie when they host Arsenal in the fifth round of the FA Cup.

And what the Premier League stars face in south London will be a world away from what they're used to at the Emirates Stadium. 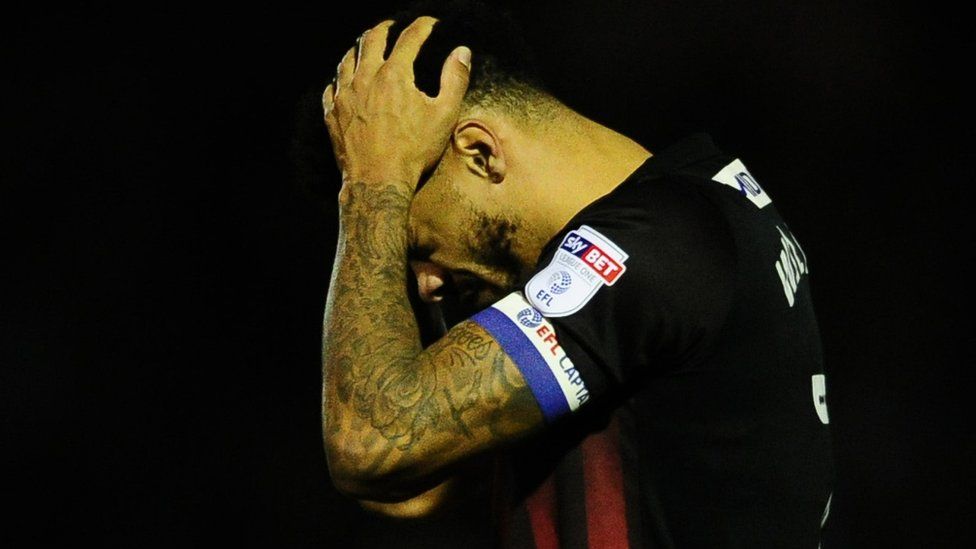 Is Coventry City a dying club? 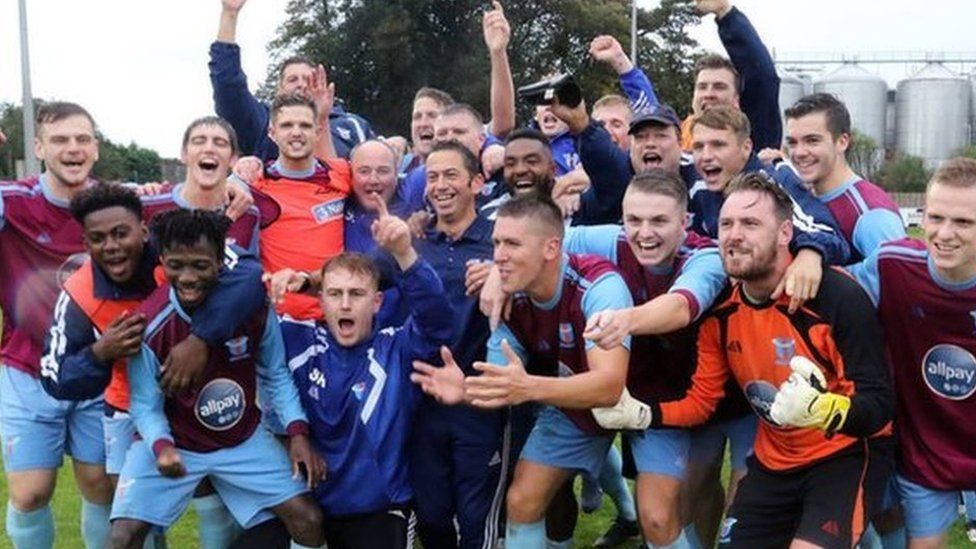 Why the FA Cup is still a big deal 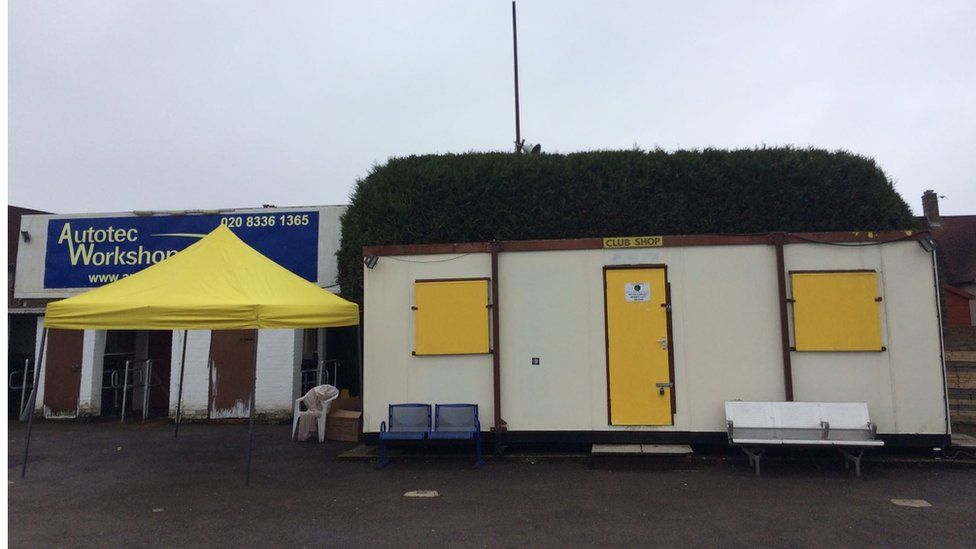 The shop is very close to the pitch, so if anyone forgets their kit they can jog off and buy some more.

It could do with a touch of paint but the place has got character.

It fits in four or five people comfortably at any time.

It's much cheaper for fans to get a kit here, certainly compared to Arsenal. You'll be advertising a local waste company on your front too. 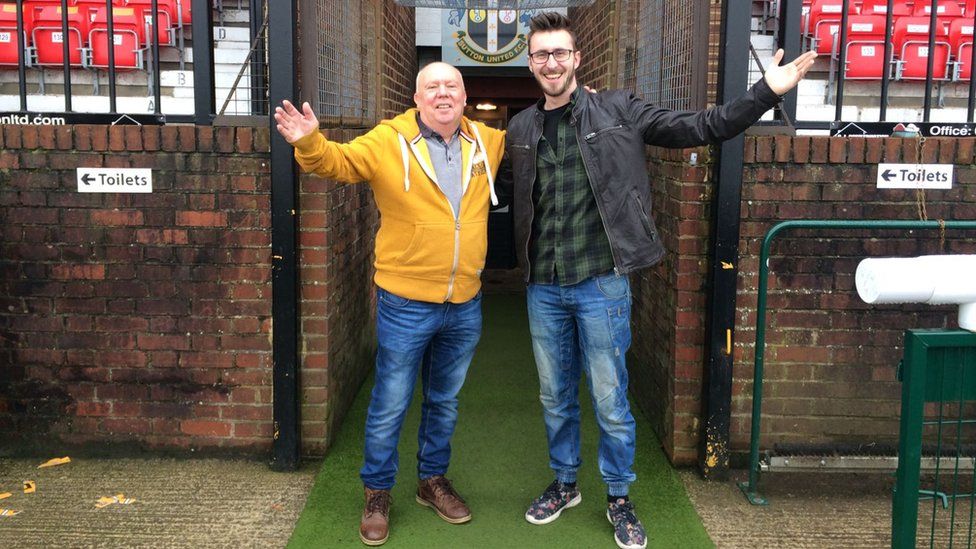 Image caption Tony Henderson-Smith (left) dresses as the mascot, with Pete James, a Sutton United and Arsenal fan - they're confident of a Sutton defeat 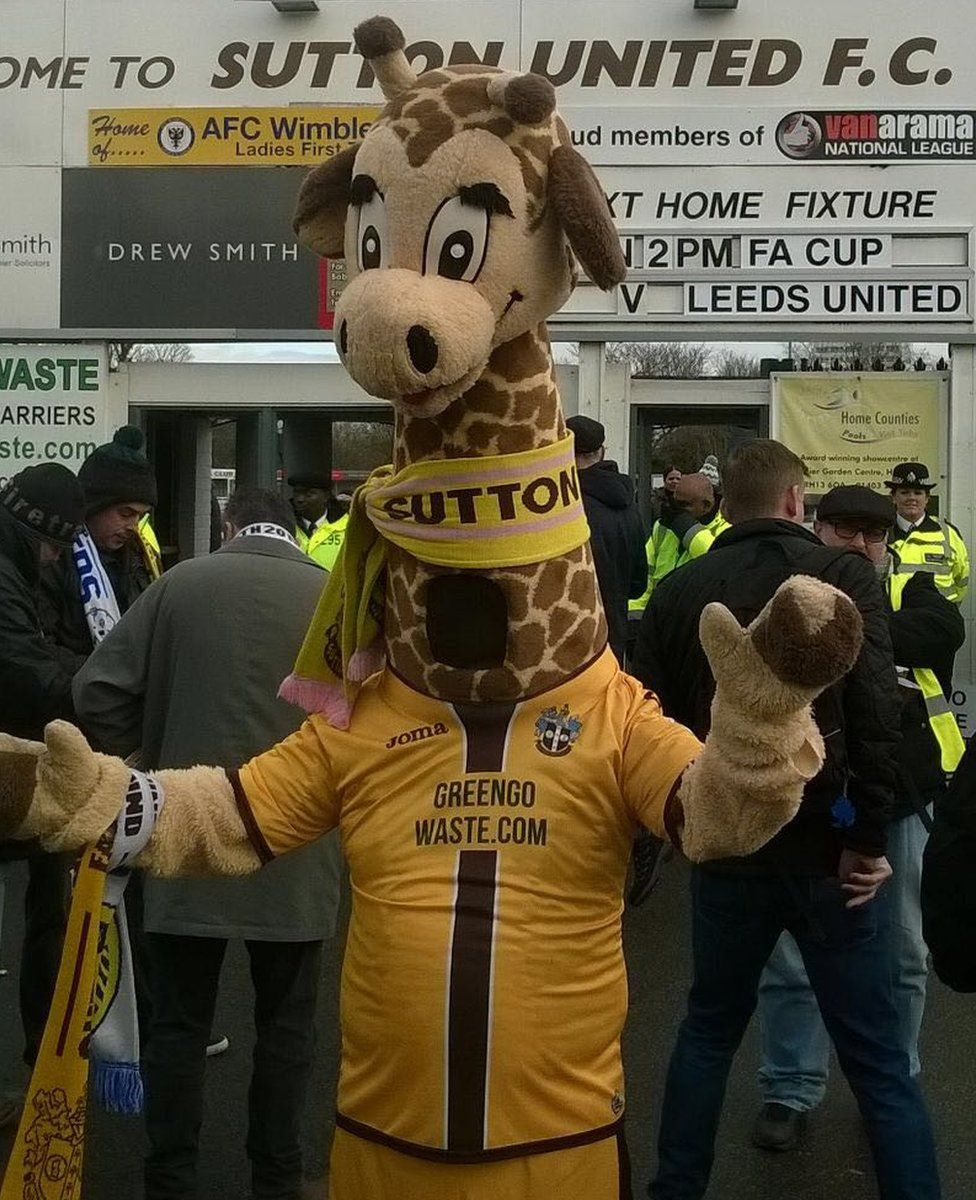 Tony Henderson-Smith, AKA Jenny the giraffe, is the club's mascot.

He says the communal bath in the changing rooms is now out of action.

"We can't use it anymore because of health and safety," he says.

"I don't see it being a problem, as the holes in the roof will help with the water supply."

Don't forget, it's the fifth round, so there are just 16 teams left in the competition. 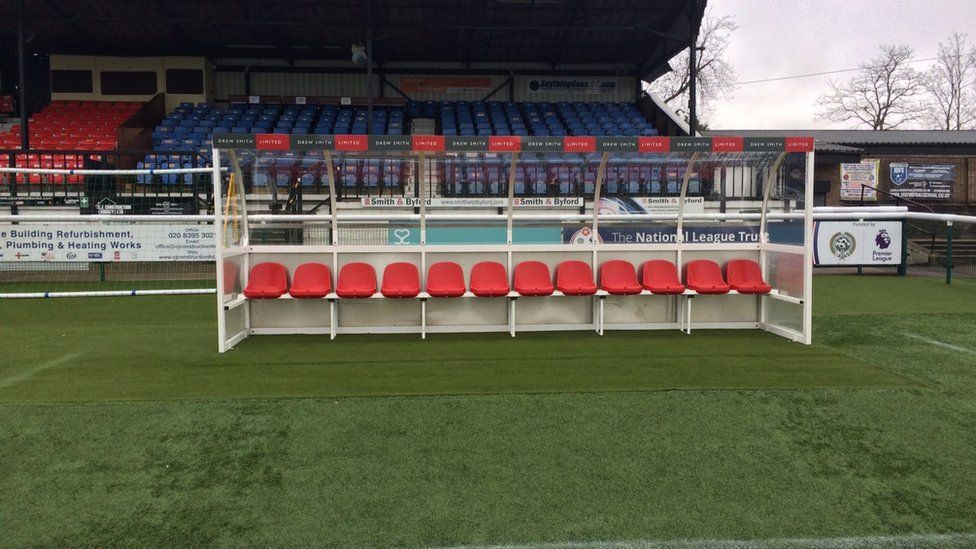 In the past, 3G pitches have been criticised for causing more injuries and having an irregular bounce.

But the new generation are much better than the "pub car park jokes" made about the pitches in the 1980s.

Pete James is both a Sutton United and an Arsenal fan but he's taking the side of his local team for this cup clash.

"It's perfectly legal - in fact it works a lot better than our old pitch did." 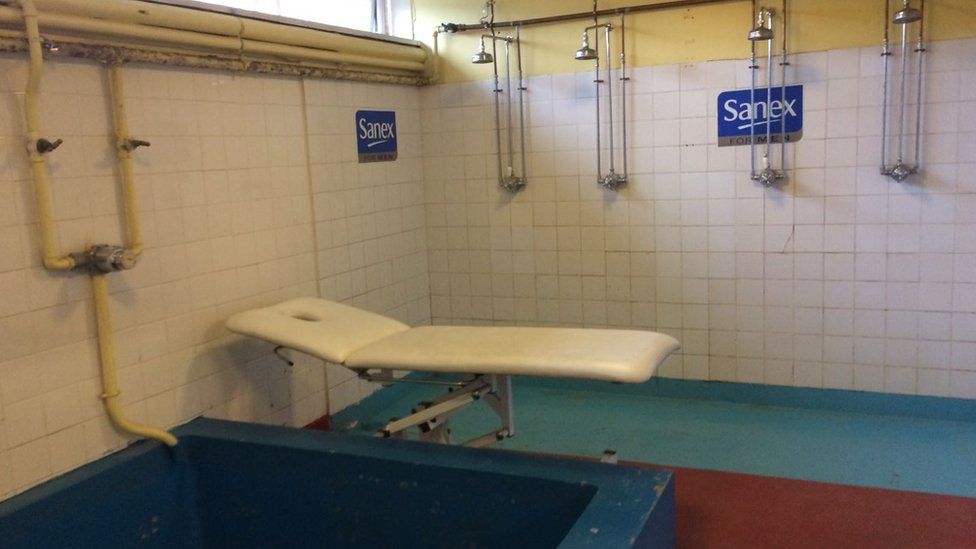 The pegs in the changing room are mostly intact and around 8in apart.

So it will be a little cosy. The benches fit around ten people, so the keeper and the subs will have to get changed on the concrete floor.

Speaking of the keeper, he's a bit of a legend around these parts.

Wayne Shaw is 45 and old enough to be Arsenal's Alex Oxlade-Chamberlain's dad.

Some have questioned his reflexes but Jenny the giraffe rates him.

"I've seen him in the bar and if there are any sandwiches around, you know, he's first there." 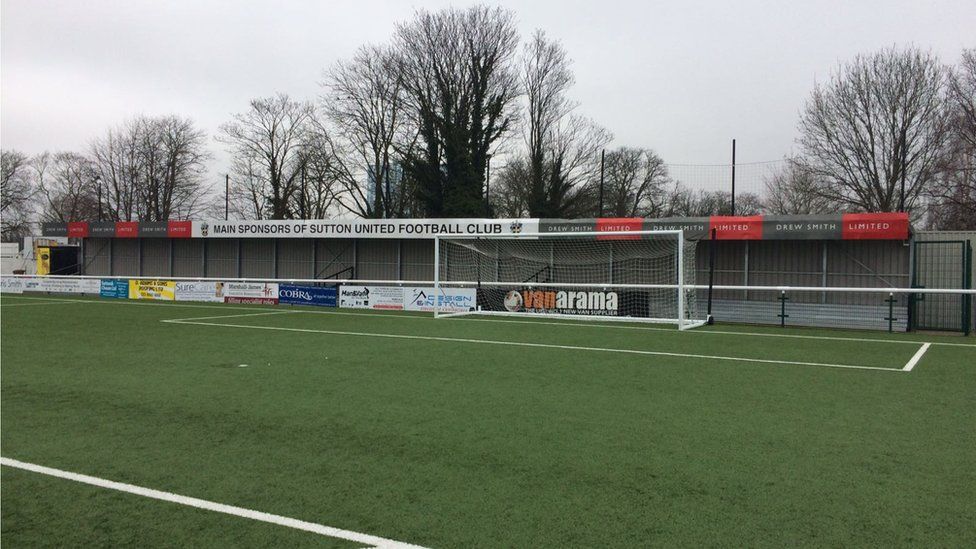 No seats here, but there are six elevated tin and stone ledges and the view is unobstructed.

In fact the only barrier in some parts is a metal pole on the edge of the pitch and that tends to get in the way of corners.

A few hundred will fit in at a push, and they'll be able to see their Arsenal heroes much more up close and personal than at the Emirates.

Pete says: "I just remember the old north bank at Highbury. Picture that on a smaller scale."

The timing of the game could also come as even more of a shock to the system for away players and fans.

Arsenal will play at Bayern Munich before they head down to the London Borough of Sutton.

"It's going to be very crowded for them. I think it will be superb to get in that bike shed and they'll enjoy it," says Pete.

The next round of the FA Cup will be played from between 17 and 20 February.