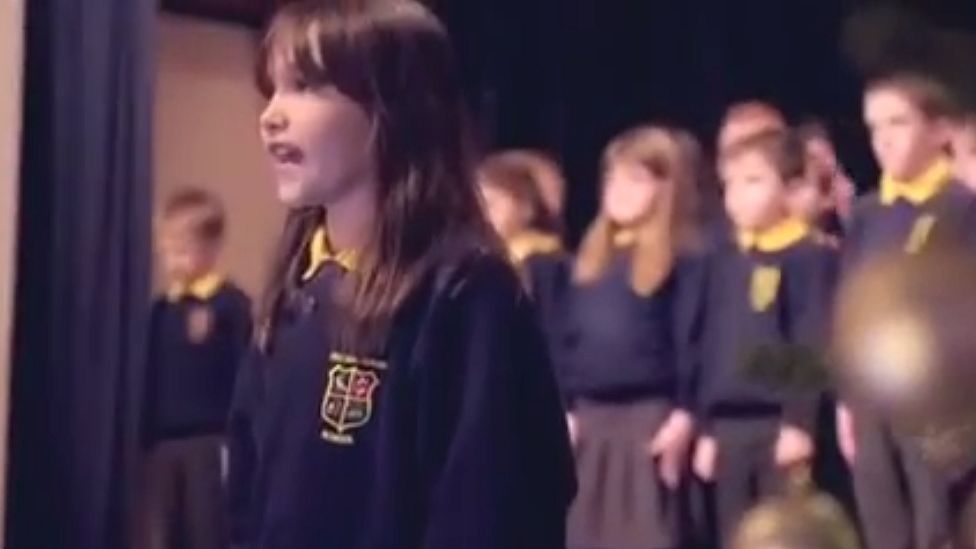 Kayleigh Rogers' version of Leonard Cohen's Hallelujah was the highlight of her school's Christmas concert and has been shared thousands of times online.

"She'd be a very quiet little girl, but when she sings, she just opens up," he tells Newsbeat.

Kayleigh is one of 200 students aged three to 16 at Killard House School in Donaghadee, Northern Ireland.

Kayleigh often sings at the local Christmas concert at First Presbyterian Church, Newtownards, but this year she lost her voice and had to pull out of last Sunday's service.

Instead her headteacher played the video above, which had been filmed just weeks before at the school, and it left many of the congregation in tears.

The video, filmed by Billy McAuley, was uploaded to Facebook and YouTube, and reported in the local press.

It has since been viewed and shared hundreds of thousands of times, and the school has taken calls from people in Australia, America and Japan who have all seen the video.

Kayleigh started at Killard House School in year four and has autism and ADHD, which results in learning delays with literacy and numeracy.

Music teacher Lloyd Scates spotted her talent early on and encouraged her to sing solos during school shows, to help develop her voice and her confidence.

As for Kayleigh's future, her mum Tracy told Newsbeat that her daughter may have some options to sing professionally - but that it would only work if her music teacher Mr Scates was involved.

"She always loved singing, but it wasn't until she started at Killard House School that she really came into her own," says Tracy. "He's like her safety blanket - he's amazing."

Headteacher Mr Millar added: "She gets so much confidence from the singing.

"All my kids have talents, as well as barriers, and this is hers."