Terror deaths in Western Europe at highest level since 2004 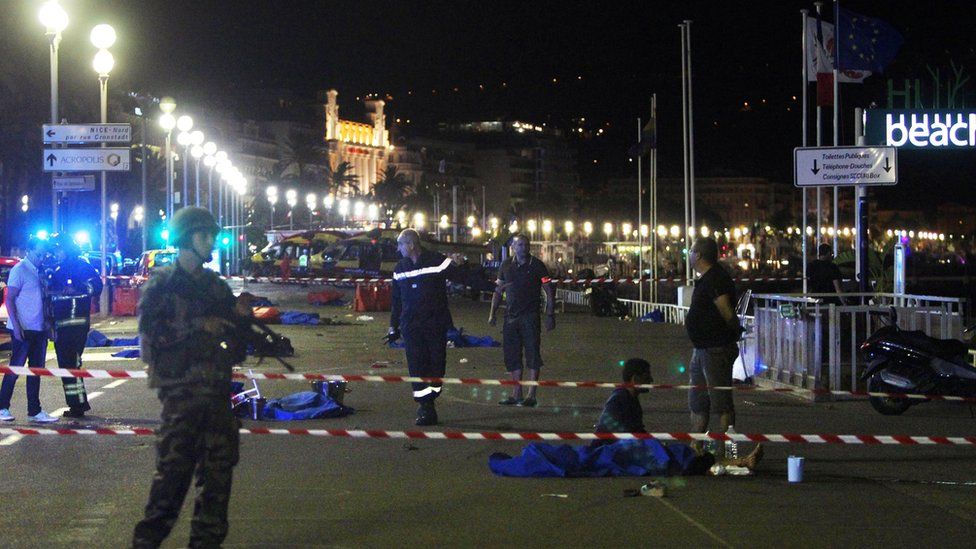 The start of 2016 saw the highest number of terrorism deaths in Western Europe since 2004, BBC research has revealed.

The first seven months of the year saw 143 deaths, which is also the second worst start to the year since 1980.

However, researchers pointed out that the 1970s saw several years with higher terrorism death tolls, so Western Europe is not "in a downward spiral".

And only 6% of worldwide terrorism deaths in July 2016 happened in Western Europe, with many more attacks in countries like Iraq and Syria. 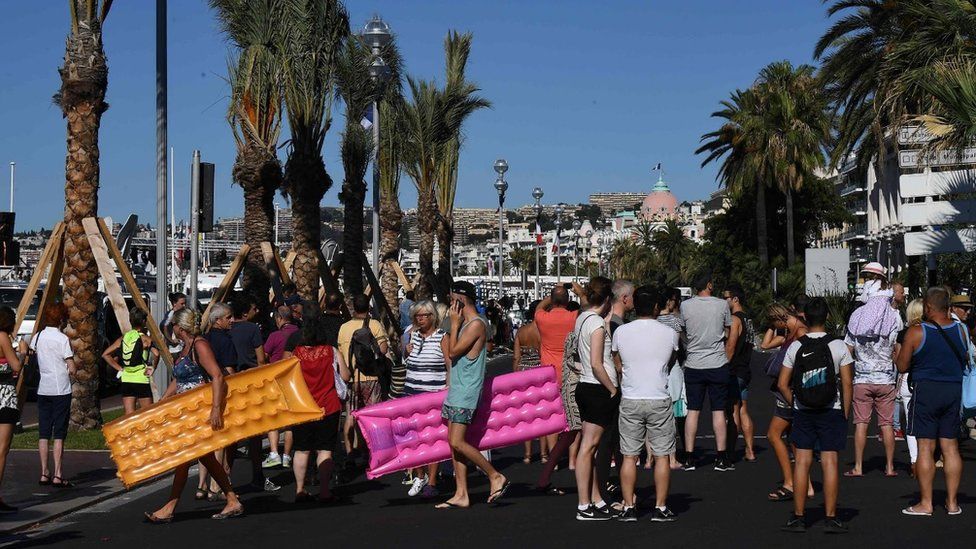 Are we becoming numb to terror? 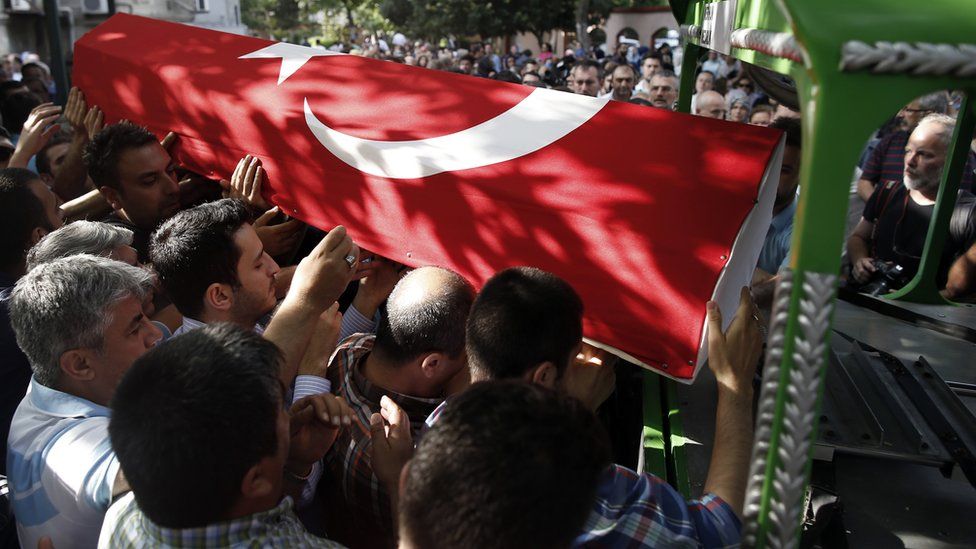 Turkish attacks you may not have heard about 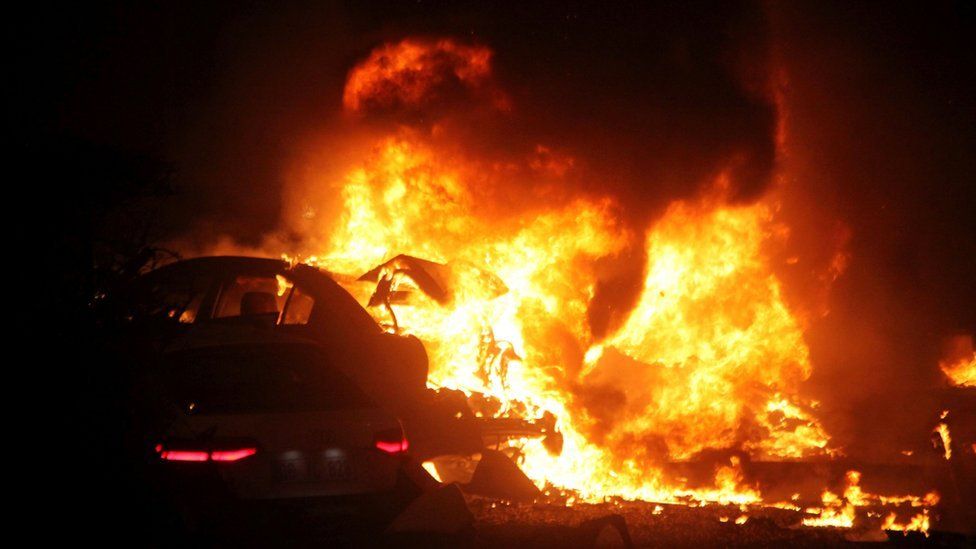 What's going on in Turkey? 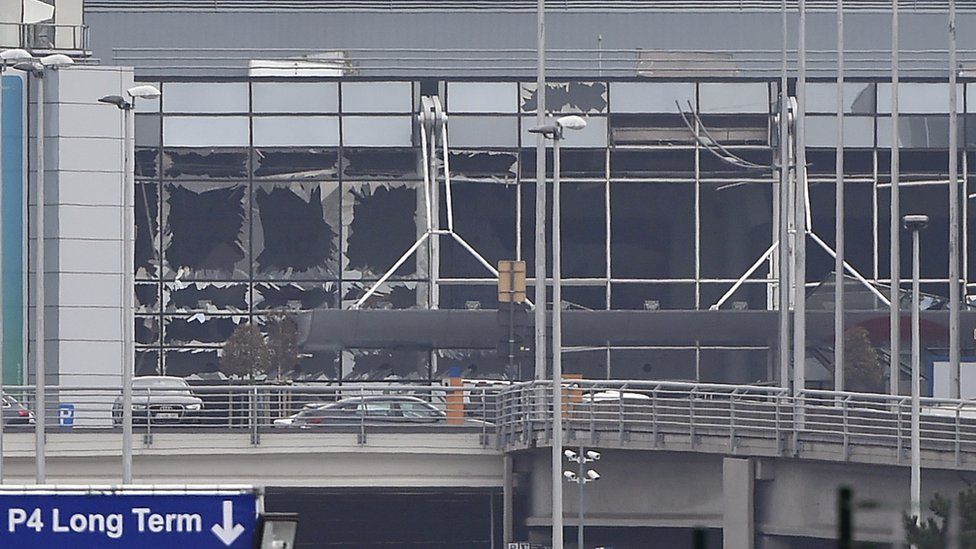 Newsbeat teamed up with Radio 4's More or Less and BBC Monitoring to analyse thousands of news articles.

We worked with the University of Maryland's Global Terrorism Database (GTD), which has recorded terrorist attacks between 1970 and 2015. 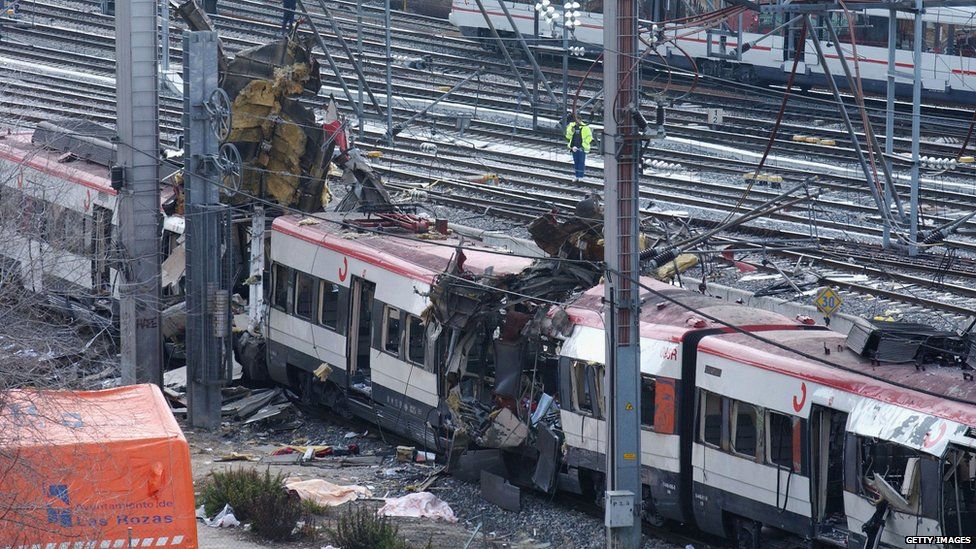 Image caption 191 people died and 1,841 people were wounded in the Madrid train bombings in 2004

Finding a definition for terrorism that everyone agrees on is impossible.

We looked at whether incidents would fall within the GTD's definition so that we could compare our analysis with their historical figures.

The GTD classes a terrorist attack as violence used to achieve a political, social, economic or religious goal, carried out by someone not working for a government.

"In the last few years we've seen very steep increases in the number of attacks and the lethality of attacks," says Dr Erin Miller, who runs the database.

"And so that has certainly been a concerning trend."

'Every morning we're waking up to another tragedy'

For a lot of people 2016 has seemed like a bad year for terrorism. It feels like it's barely been out of the headlines.

Video caption Killings in Europe you heard about in the news in 2016.

European militant groups of the 1970s

With 143 deaths, the first seven months of 2016 have been the worst in more than a decade.

The only year with more deaths since the turn of the century was the first half of 2004, when 191 people were killed in a series of train bombings in Madrid.

But when you look further back, there were many more deadly years in the 1970s.

"Of course, there was the conflict in Northern Ireland with the Irish Republican Army," explains Dr Miller.

"There was the Basque fatherland and freedom group in the Basque region of Spain and France, and there are a number of extreme left-wing groups in other parts of Europe

"And so I do think it's a mistake to forget about that and assume that we're just in this never-ending downward spiral, which is certainly not the case."

A deadly year in Turkey 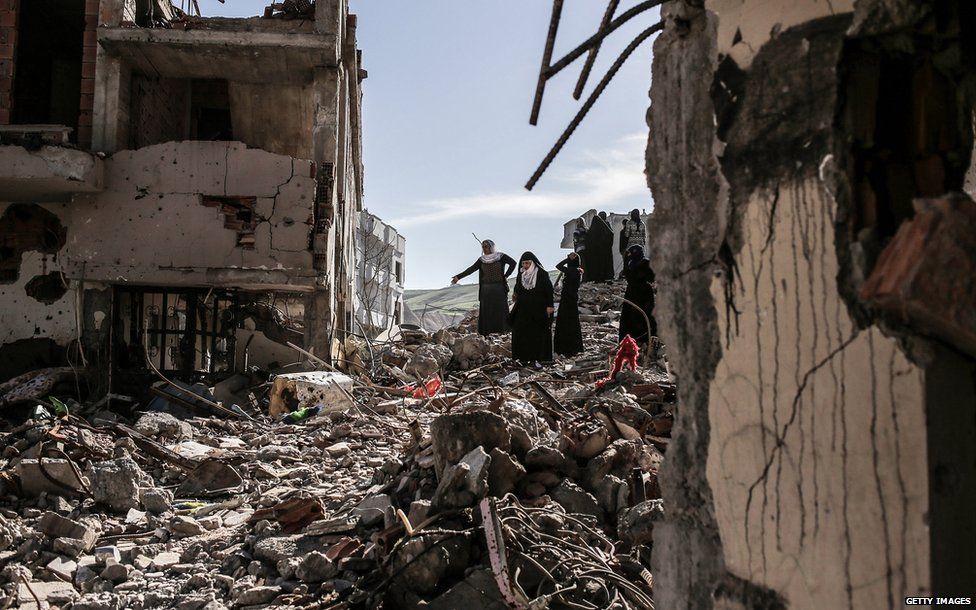 If the figures are broadened to look at Europe as a whole the GTD's definition of terrorist attacks brings up a much higher count.

The analysis shows that there were 892 terror deaths across Europe, including Turkey, in the first seven months of 2016. That makes it the deadliest start to a year in more than two decades for the continent.

These figures will be controversial to some because the GTD say they would also class the recent attempted coup as falling within their definition of a terrorist attack. So those deaths are included in the Europe total too. Other analysts would dispute this was a terrorist act.

Putting the coup to one side, Turkey has also seen a rise in violence more generally in the past year.

A number of pro-Kurdish militant groups in Turkey are fighting for greater autonomy as part of a bloody campaign that reached its peak in the mid-1990s.

In fact, it's this same conflict that's partly behind the spike in European terrorism deaths between 1992 and 1994.

A ceasefire broke down in July 2015 and groups like the Kurdistan Workers' Party (PKK) and the Kurdistan Freedom Hawks (TAK) have been carrying out shootings and bomb attacks ever since, in the Kurdish-dominated areas of the south-east as well as the major cities of Ankara and Istanbul.

Combined, these groups have killed more people in Europe so far in 2016 than so-called Islamic State. 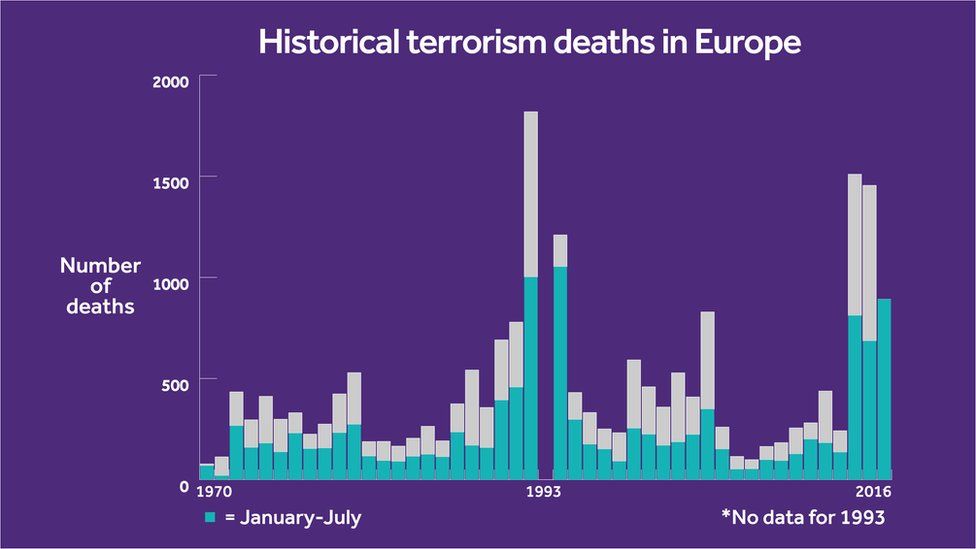 July was a particularly bad month for terrorism in Europe.

But the deaths actually make up only a small part of the global total.

We estimate there were 1,580 terrorism deaths worldwide that month, although getting accurate information from some places - like Iraq and Syria - is particularly tricky.

Thirty per cent of our estimated total were in Europe, and six per cent were in Western Europe. 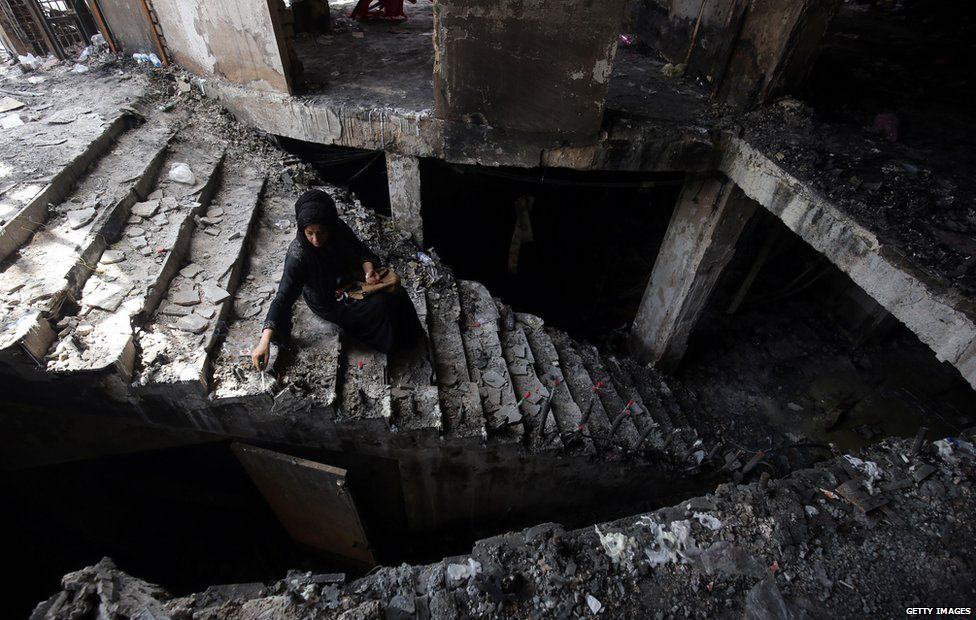 In Baghdad, a reported 292 people were killed in a bomb attack as they shopped on 2 July ahead of the Muslim holiday of Eid.

That's nearly three times as many as in the whole of Western Europe for the entire month.

And that isn't unusual. Dr Miller says in recent years a pattern has started emerging.

"The vast, vast majority of these attacks do take place in a very small number of countries. So in Iraq, in Afghanistan, in Syria, in Nigeria." 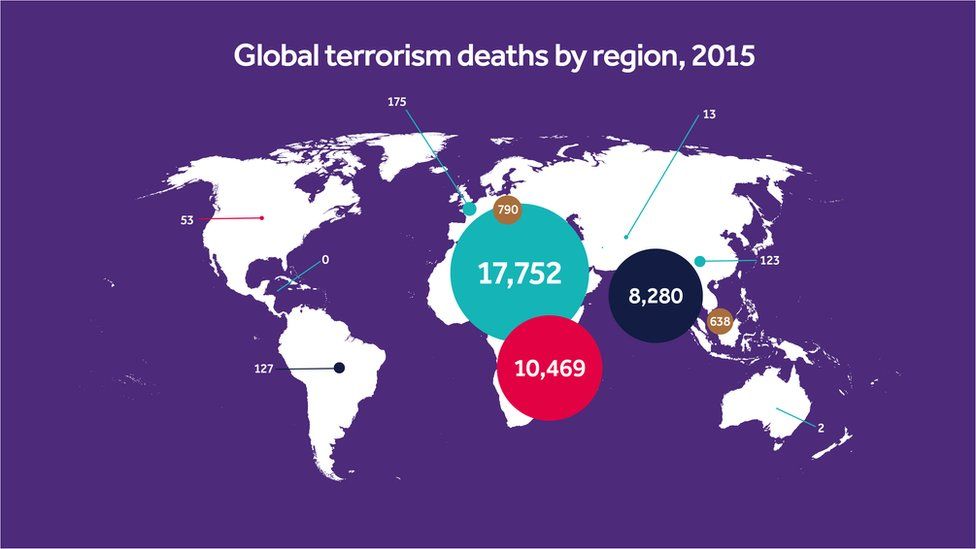 How likely are you to be killed in an attack?

"For all the fear that terrorism generates, you're almost certainly going to die of something else," he explains.

"It's small potatoes compared to all the other ways that people kill each other - wars, homicides and murders, car accidents, or just about any type of accident.

"But it's designed to generate a lot of publicity. We can't turn our heads away from gory carnage and the terrorists know that.

"So you get a lot of publicity generated by attacks that are horribly tragic, but kill a fraction of the number of people who die from drowning, falls, or ordinary bar room murders." 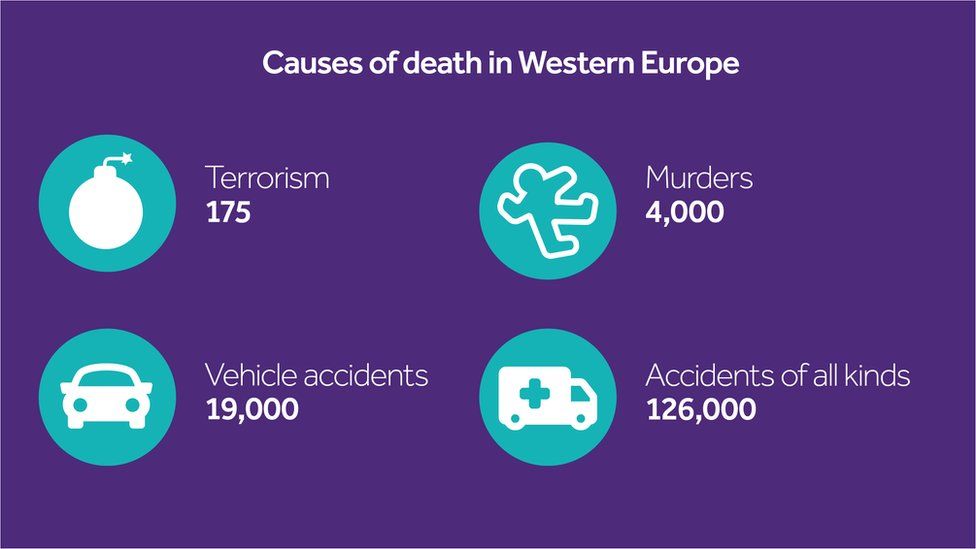