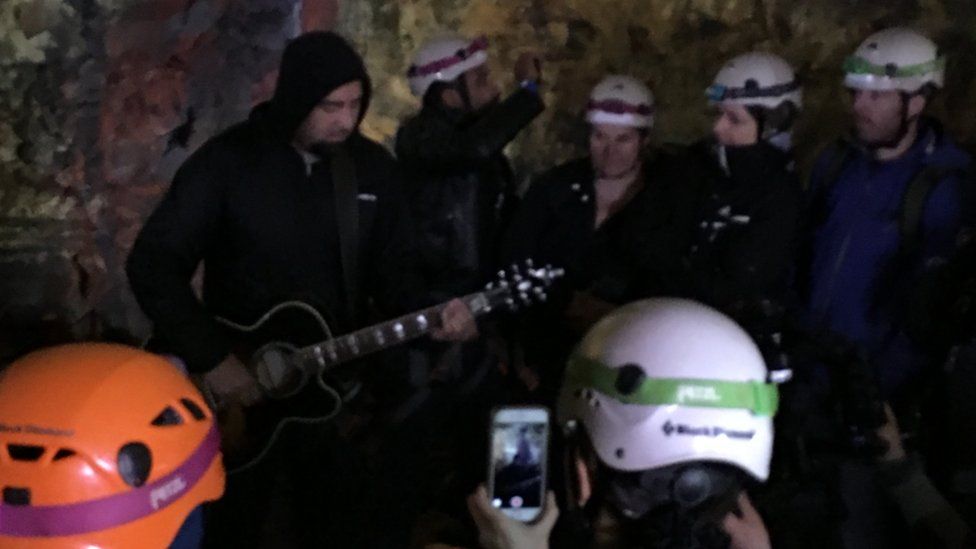 When you get to the mouth of the volcano after trekking two and a half miles across lava fields, it looks so small.

To get down into the shaft, the tour operators had converted a window cleaning lift, which holds about eight people when it descends the 120m to the centre.

It goes down slowly. So slowly that it takes about six minutes before it halts inside the volcano.

As you go down you can see the force of the lava in the rock.

Watch a video of how music lovers got to the concert inside a volcano. 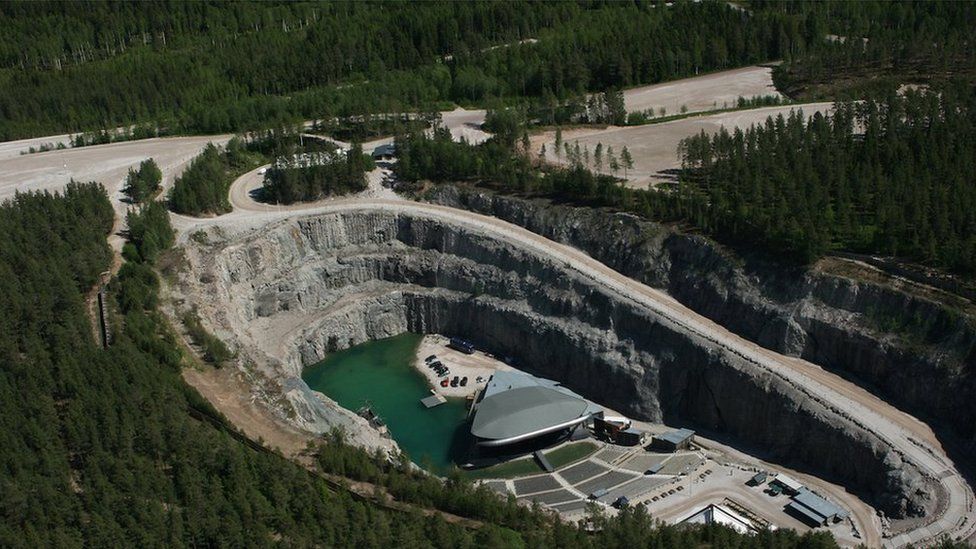 Weird places festivals have been held 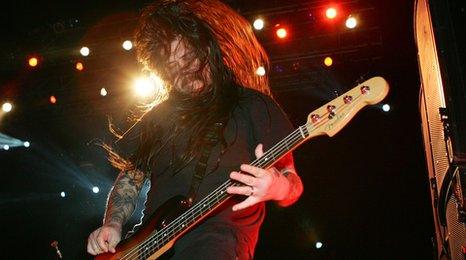 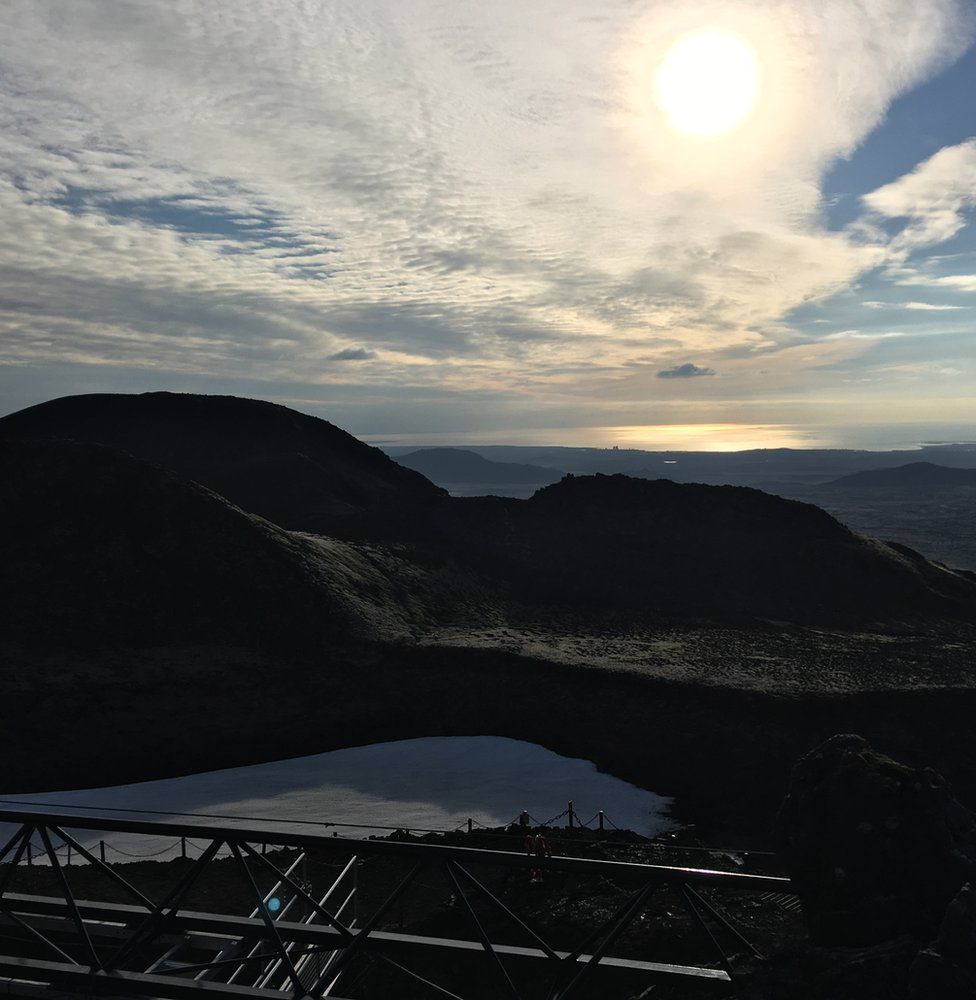 Image caption The view from the top of Thrihnukagigur volcano 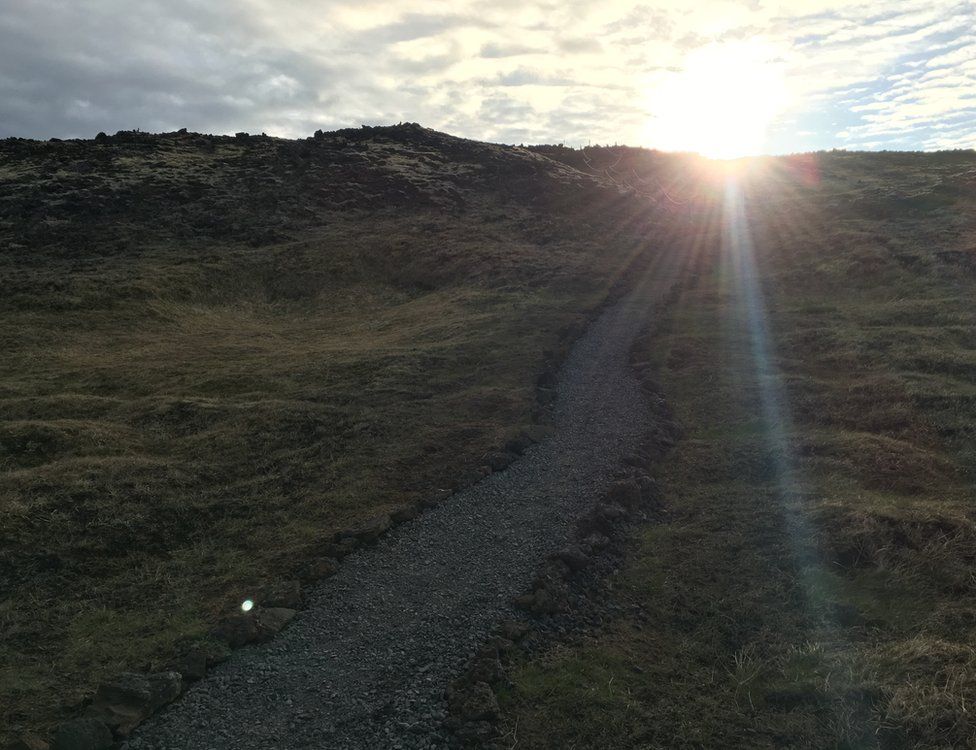 Image caption Part of the 1.8-mile (3km) walk to the volcano includes a trek across lava fields

The ground is made up of lots of uneven rock and the walls are a myriad of rust reds, bright sulphuric yellows and black burnt patches.

Icelandic singer-songwriter Snorri Helgason was the first to perform.

He stood high up on a rock to make the most of the acoustics. 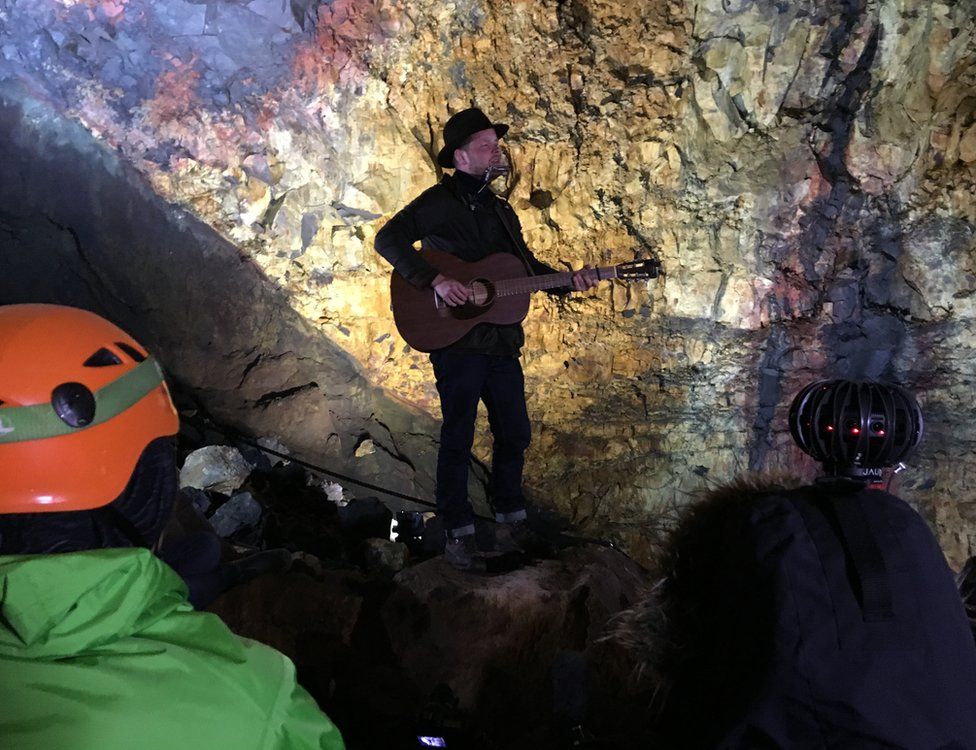 His first song was a Scottish ballad.

He then explained to the crowd that because we were underground and the temperature was so low (4C), it would affect the sound of the instruments.

He assured us that he'd looked into the "science" and his guitar would sound higher than normal, while his harmonica would lose pitch and sound lower.

He described the venue as "a natural cathedral underground".

His performance, nonetheless, was beautiful. 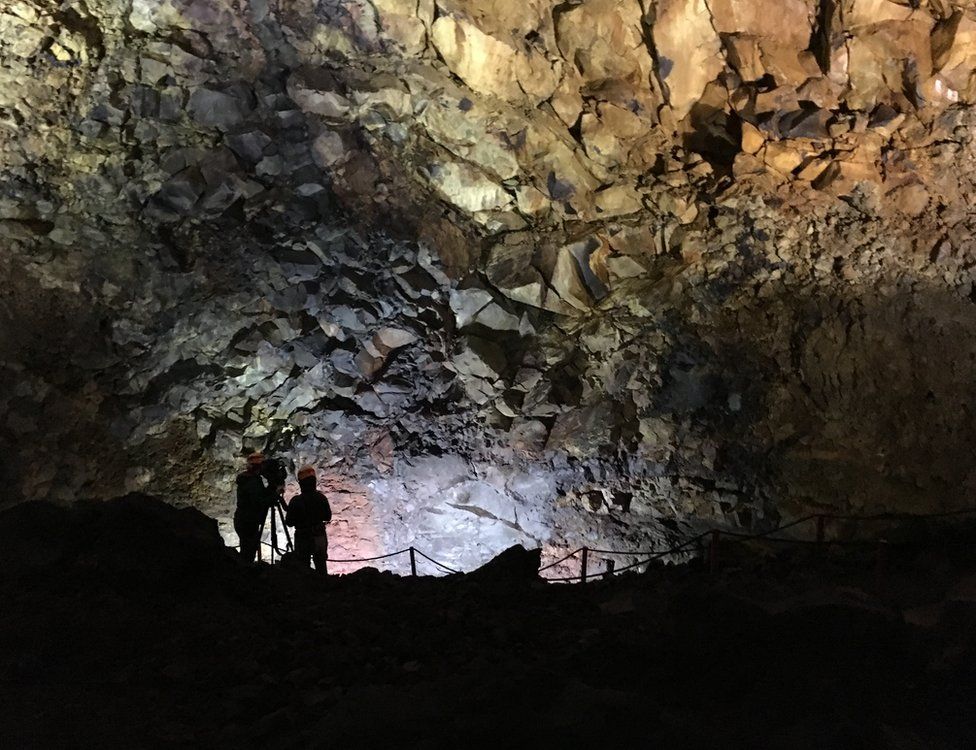 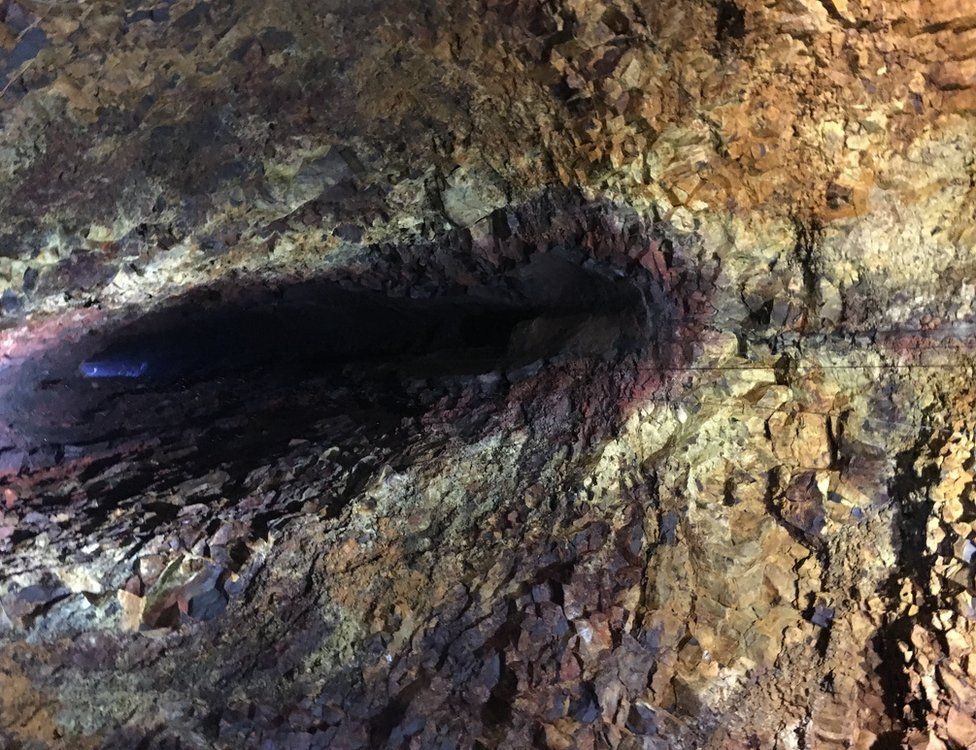 The second act was from Chino Moreno, the lead singer of Deftones.

He revealed that he was actually "a little nervous" to perform. 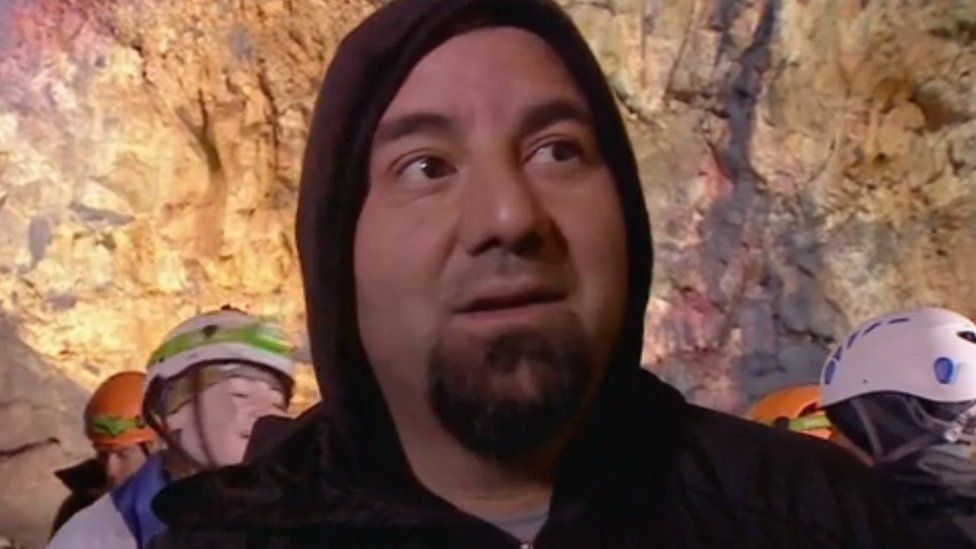 He did a three-song set of Morrissey, a track from his band and a David Bowie song from his last album Blackstar.

I'll have to admit, his set was a bit disappointing.

He stood pretty much among the audience, so his vocals didn't fill the space.

And he hadn't done his homework like the Icelandic singer, so was slightly off key. 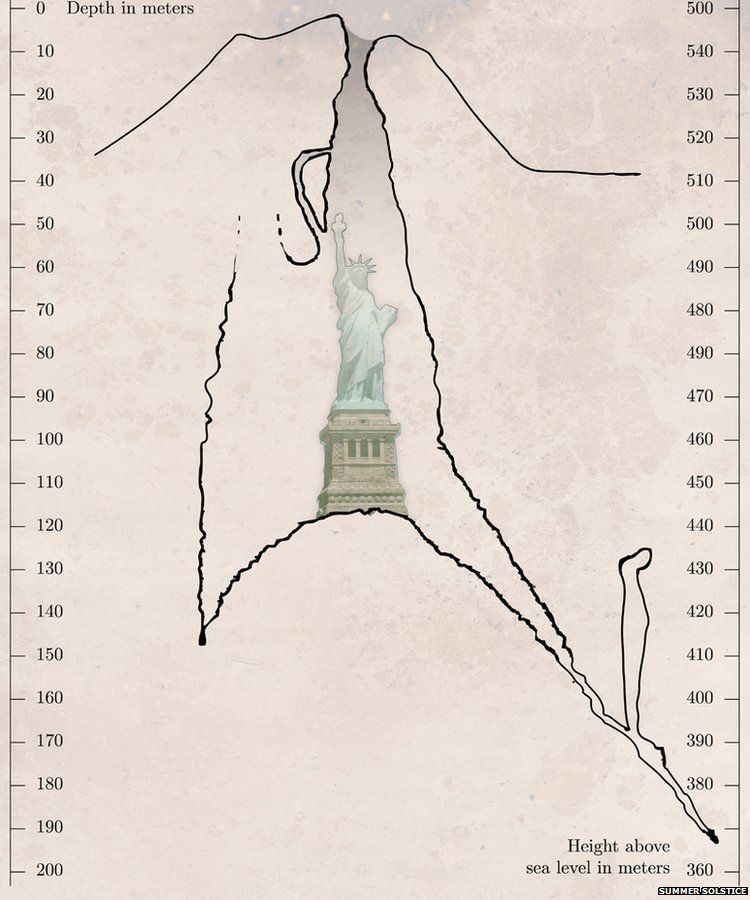 While they were in Iceland, Deftones also played at Secret Solstice festival.

But the 20 people who'd paid £1,380 to experience the once in a lifetime opportunity were still happy.

Laura Gallacher, 21, from Loch Lomond, said: "I've dreamed so long about coming into a volcano and I was crying with happiness as we came down.

"You can never experience that, you can't explain it to anyone."