What your most frequently used emoji say about you - BBC Newsbeat

What your most frequently used emoji say about you 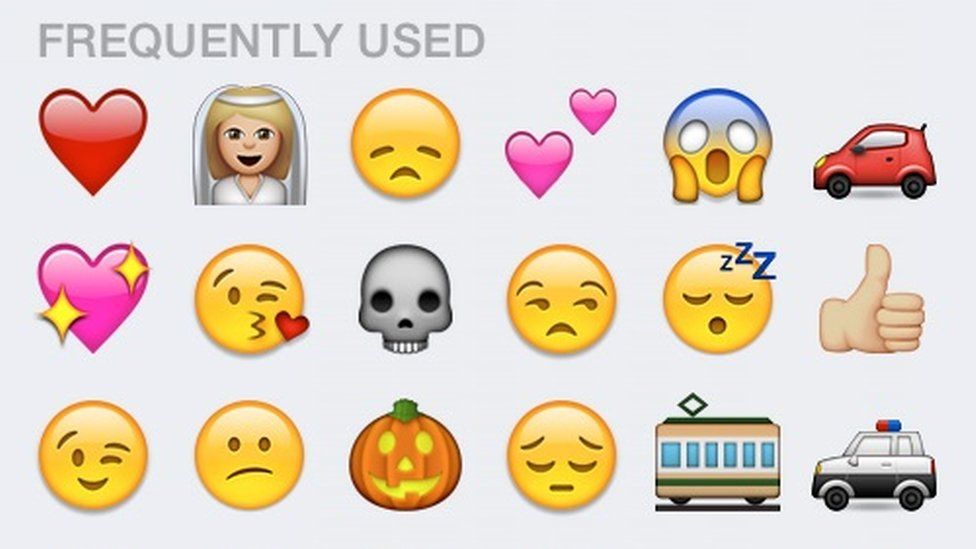 There are more than a million words in the English language but for this year's Word of the Year, Oxford Dictionaries chose... the tears of joy emoji.

Billions of emoji are used every year, so maybe the choice isn't as outrageous as it first seems. More on that later.

But, given this landmark moment in the era of the emoji, Newsbeat wanted to find out more about these little icons.

And what the ones we use most often say about us.

Newsbeat Twitter followers sent in some examples of their frequently used emoji and we showed them to linguistics expert Prof Vyvyan Evans from the University of Bangor. 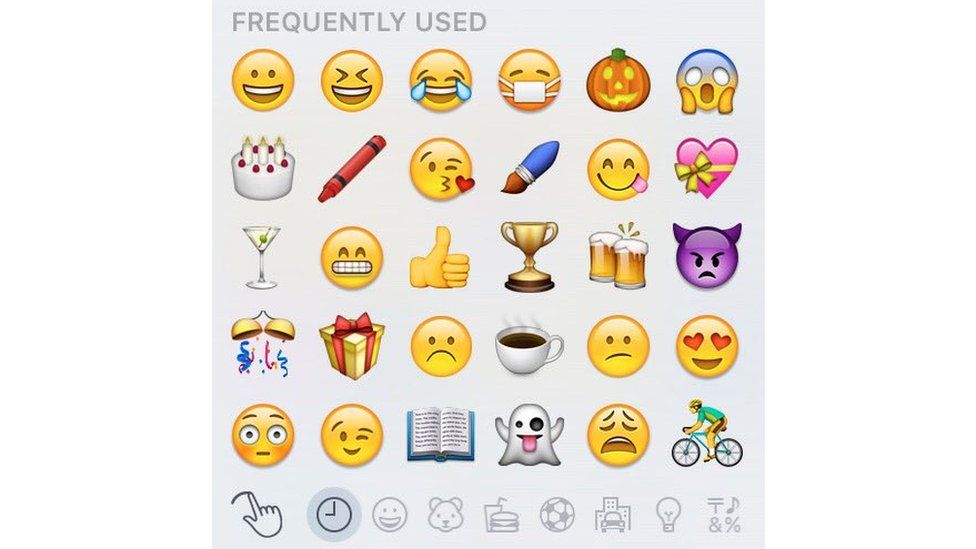 Every single example we used had the tears of joy emoji.

It has recently become the most-used icon in the UK, overtaking the standard smiley face, Prof Evans says, so Oxford Dictionaries are on to something there.

Like the sample above, where faces are the most commonly used symbols, emoji showing "expression" are the most popular worldwide, regardless of culture.

Emoji trends do change throughout the year, Prof Evans explains, pointing to the ghost and the pumpkin in the picture above.

"Those will probably show up in a seasonal cycle. So if you ask people in a few weeks time, probably the Halloween pumpkin wouldn't be there," he says. 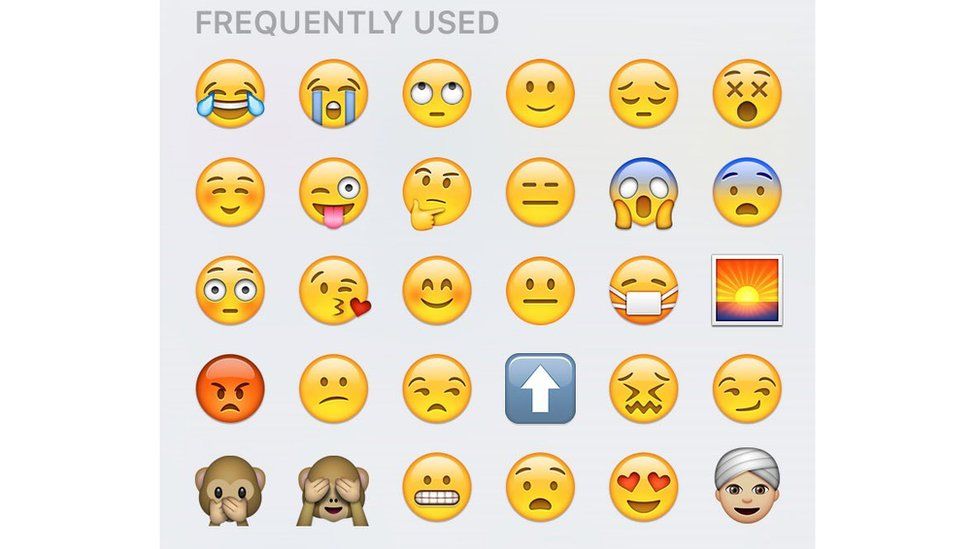 Data shows the poo emoji is used the most in Canada, while Arabic-speaking countries use plants more often than elsewhere, says Prof Evans, but faces are always the most popular worldwide.

The example above is almost exclusively made up of a variety of facial expressions.

"Globally, about 45% of emoji are happy faces, around 14% are sad faces and a little over 12% relate to hearts of various types, including broken heart," says Prof Evans.

"So roughly 70% of emoji usage, sent every day, relates to emotional experience of some kind." 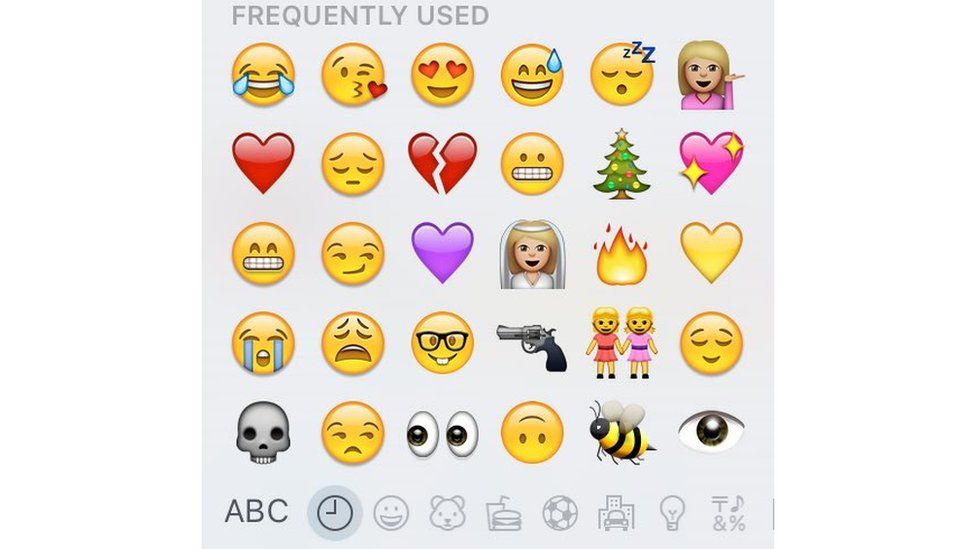 The gun and skull emoji used in this example are most often used to express negative emotions, rather than their more literal meaning.

But Prof Evans warns care should still be taken when posting these kinds of icons on social media.

"There was a case in January of this year where a 17-year-old boy from New York was arrested by the NYPD for an alleged terrorist threat," he says.

"What this guy did was have a police officer emoji and then a handgun emoji pointing at the officer which he posted on his Facebook page.

"Emoji are more than just a splash of colour. They can and will be used in a court of law against you." 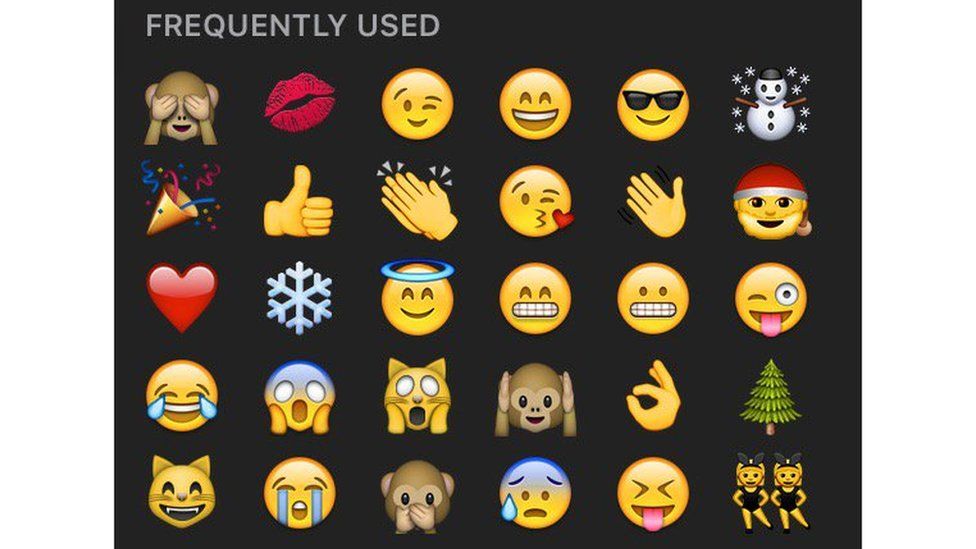 The example above has four different types of hand gesture as well as the three monkey symbols.

Prof Evans says these all show the way that culture influences the meanings we give to emoji.

"The praying hands are used in a different way in Japanese culture. The original 176 emoji were launched in Japan in 1999," he says.

"This is a traditional way in Japanese culture of expressing please or thank you. But of course, in Western culture, it's often assumed to denote something religious."

He says the prominent use of hands suggests this person may be more "tactile" and they could be used instead of the more typical faces.

Meanwhile, the monkey emoji are pictoral versions of the Japanese saying "see no evil, hear no evil, speak no evil" but people in other cultures do not necessarily use them in this way. 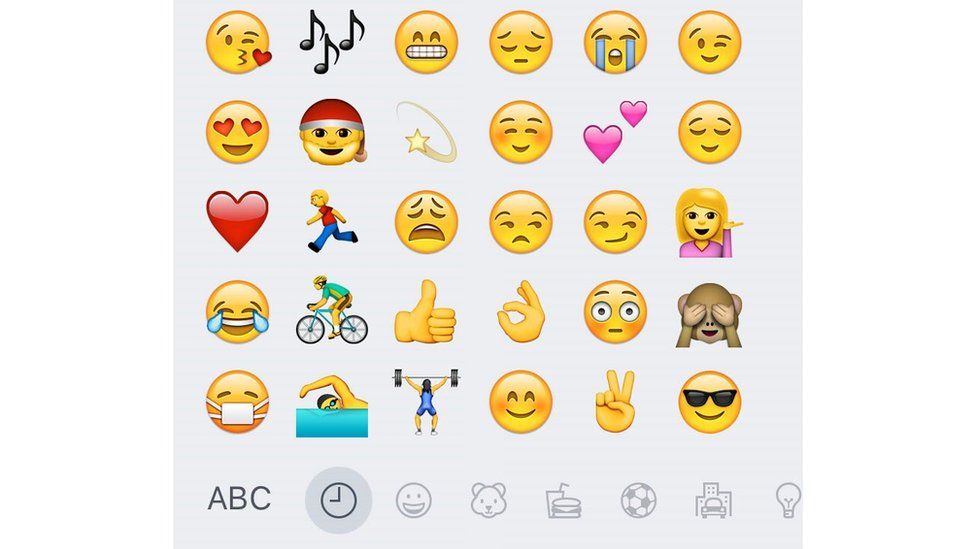 "There isn't any research on this, but you could do psychological profiling potentially by looking at emoji usage," he says.

"The research hasn't been done yet because emoji is such a new phenomenon."

For example, in the selection above there are four sporty emoji, so you might draw the conclusion that this person is very active, or wishes that they were.

Back to Oxford Dictionaries choice of an emoji for Word of the Year. Prof Evans says there is an "interesting" discussion still to be had about it.

"Emoji has a communicative function and it's a necessary function because what it's doing is putting emotional expression back into digital-speak," he says.

"It sheds light on us as a communicating species and I think it really does enhance our ability to communicate in the digital media and it's a shame that people sometimes are so prejudice against it."