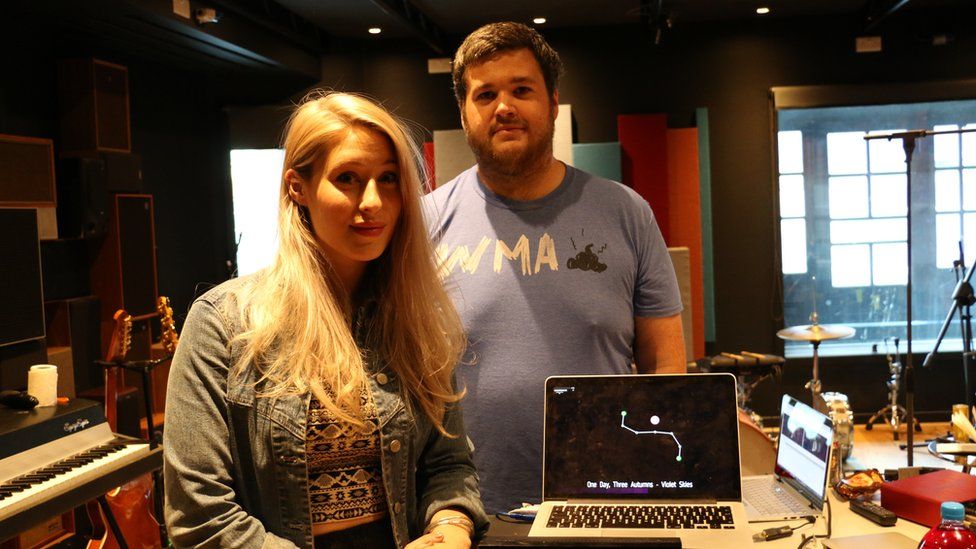 The ideas ranged from keytars to human drum kits and sensory gloves.

It was all part of a "hack day" where computer programmers work on innovative technology, but this time with musicians.

And it is timely as the tech world, now more than ever, is such an integral part of the music community.

The event, called BuzzJam, was run by the Young Guns Network, which is a networking group for young people in the music industry. 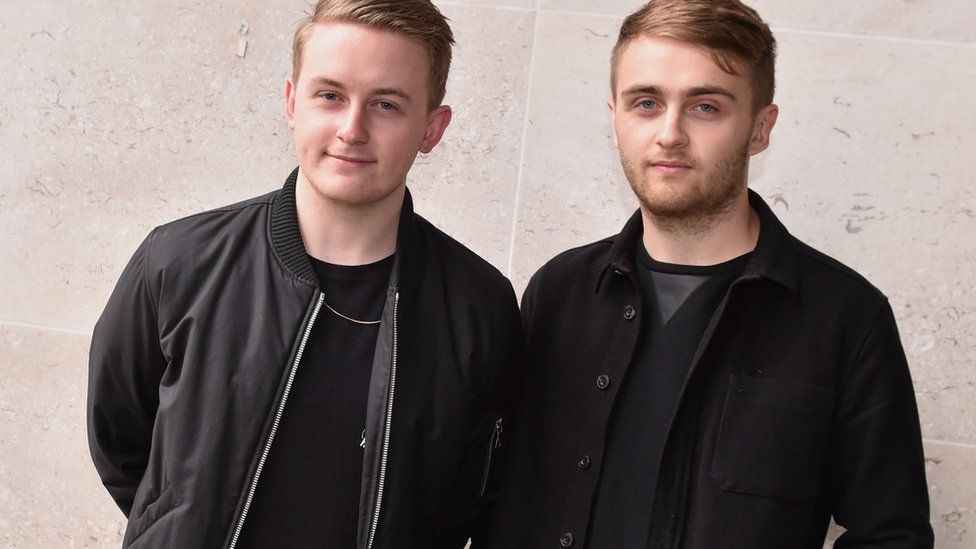 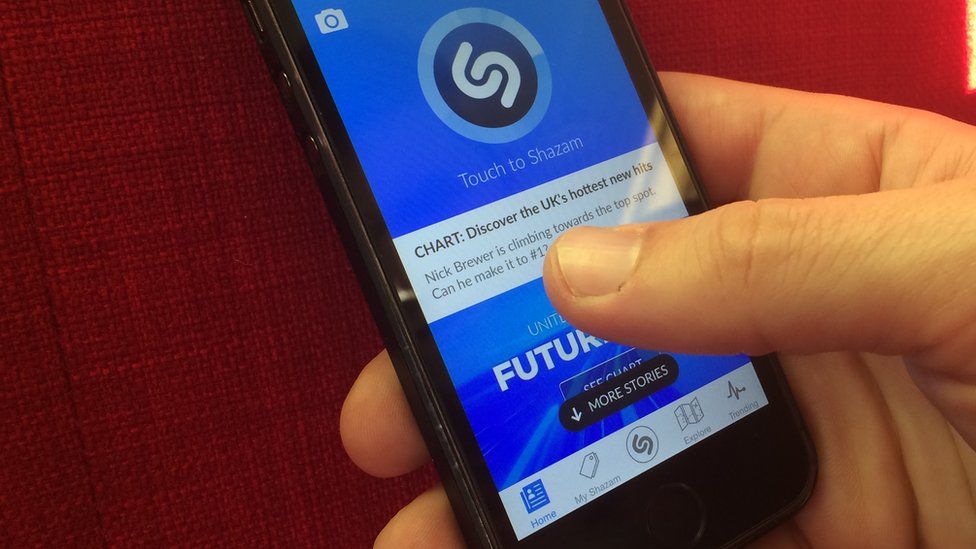 How Shazam shapes the music industry

You can see the final versions of these new musical instruments below. 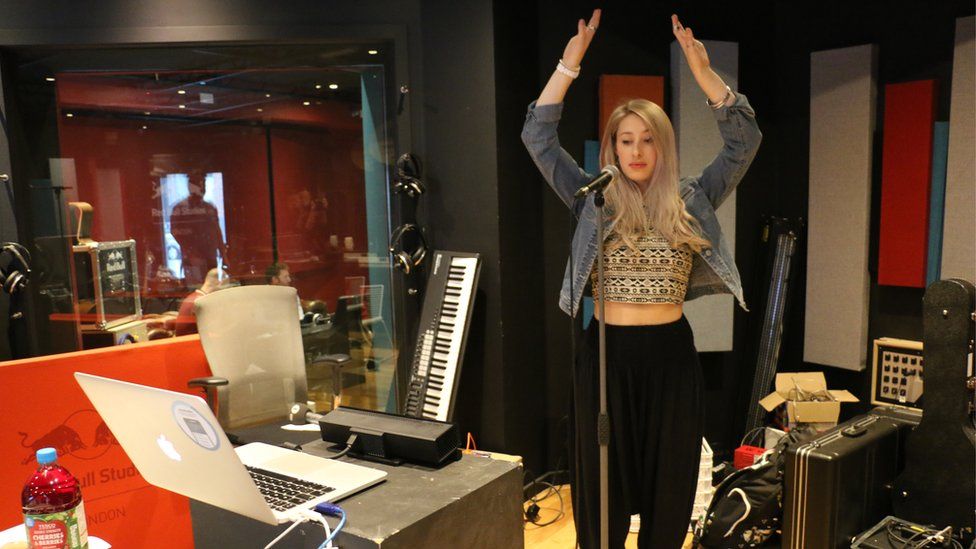 Image caption Violet uses her movements to play her her keyboard

WHO: Violet Skies is a singer-songwriter from south Wales and she's working with a team of coders from the company We Make Awesome Sh.

WHAT: Violet's Visual Orchestrator - an instrument that Violet will play by moving her body.

HOW: "There will be a sensor that tracks my movements and each move is a different part of the keyboard," Violet explains. "So it is like I am playing a keyboard but with my body and that will play the track."

Syd Lawrence is one of the coders or software developers. He tells Newsbeat they are "taking her body movements and then converting that into midi-notes which will then perform certain actions on her music".

WILL YOU USE IT AGAIN? Yes I would love to use it again, I'd love to do a live show and be like, 'This is what we are going to do now.' It means you could do anything performance-wise. 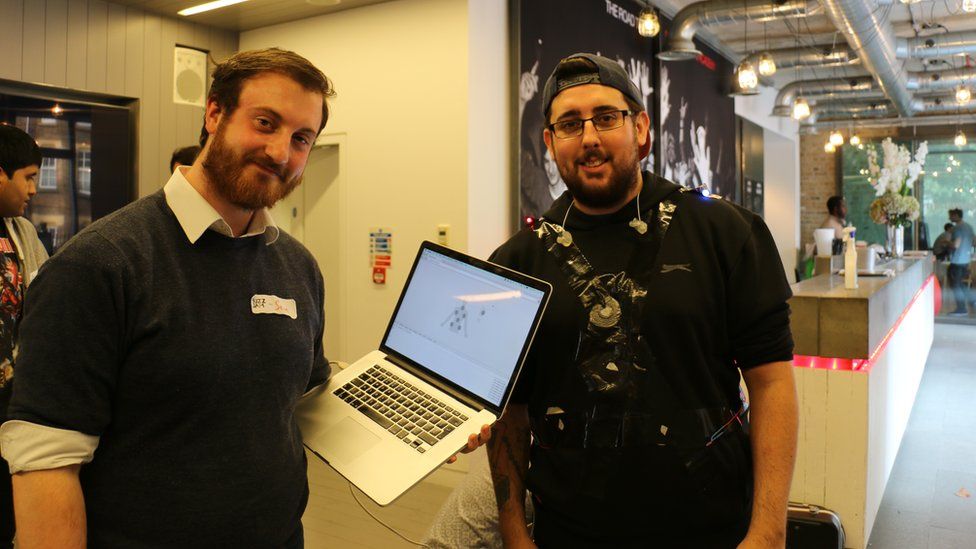 WHAT: Alfabeat - a human drum kit.

HOW: "We have made a human wearable drum kit," explains Alfie.

"So basically for the times where there are space constraints, time constraints anything like that, full bands like us can perform with all of our instruments and no-one will ever know the difference.

"It is comfortable, it is literally just a hoodie that we have sewn sensors into, so to my stomach, chest and I am hitting myself like Tarzan.

"There are always teething problems with these sort of things," adds Sean.

"We tried to put some sensors in his shoes but that didn't work at all in the end, we had five different switches, so there are always things you think are going to work and then they don't, so then you have to find solutions around that.

WILL YOU USE IT AGAIN? "It is practical and saves space," says Alfie. "Technology and innovation and music - it all goes hand in hand. There has always been a huge part in music for technology and this is how it progresses. You can perform and wear it in such a different ways."

My Panda Shall Fly 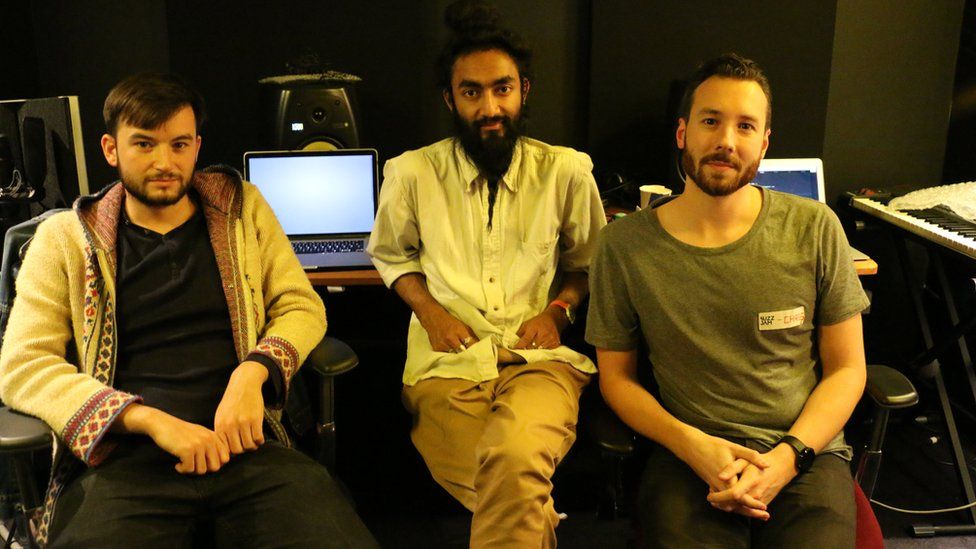 WHO: Suren Seneviratne from My Panda Shall Fly and his coders Yuli Levtov and Chris Waring.‬

WHAT: The Loose Loop - in the simplest terms, it's a soundboard with motion sensors that trigger rhythms and sequences based on the Suren feeds into it, it also creates visuals to compliment the music.

HOW: "I feed the instrument a couple of sounds and then it takes it and starts to grow from there," explains Suren. "It turns it into this completely different thing than it started with, it's almost got a brain of its own."

"Technologically, we kind of knew what we were doing in terms of we are taking audio and recording it and making it into rhythms," explains Yuli.

"The challenge was trying to keep it musically interesting and meaningful. The main body of work was talking to Suren and making sure that we were making something that he could use on stage and in the studio.

WILL YOU USE IT AGAIN? "It is something that I would love to have had before now," says Suren. 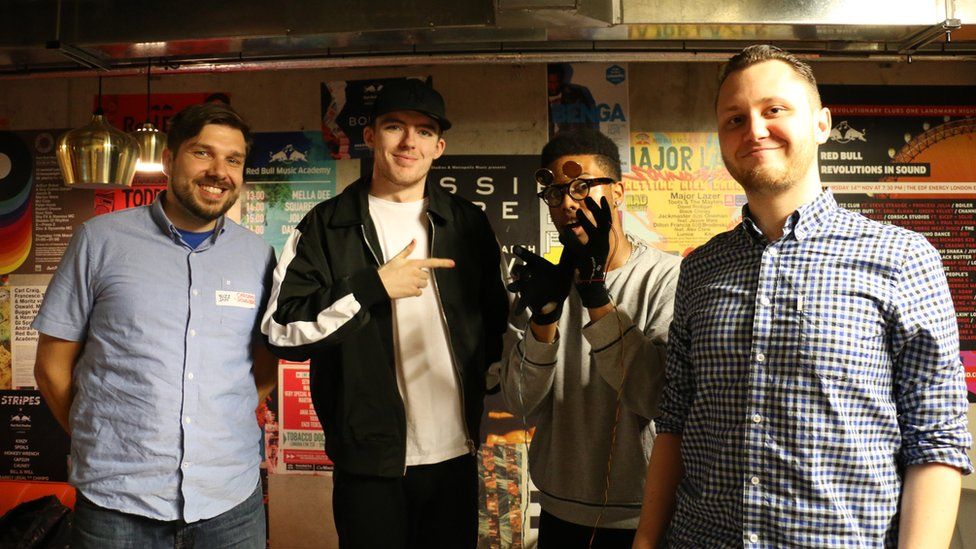 Image caption Mark Doherty, his drummer Leon, who will use the G-Beat and his coders Christoph Sassenberg (far left) and Mark Durrant (far right)

WHO: Mark Doherty, his drummer Joel Oliver and team of coders Mark Durrant and Christoph Sassenberg.

WHAT: The G-Beat, a glove that can drum.

HOW: The glove has sensors in it that are attached to software which will play drum beats when triggered. Joel is using them: "It's quite easy because I am a drummer so I tap a lot, even on trains or the bus, so to do it with these gloves is amazing," he says.

"It has been pretty difficult," admits coder Mark Durrant. "We have had some stops and starts. From a technical perspective it is a relatively simple idea but because it is something that we have never tried before. There is no instruction manual for this, so there have been a lot of things where we have tried something and it hasn't worked out."

WILL YOU USE IT AGAIN? "I definitely want to use this in the future for gigs," Mark Doherty tells Newsbeat. "It is just something that you know we are making history with, it is just great." 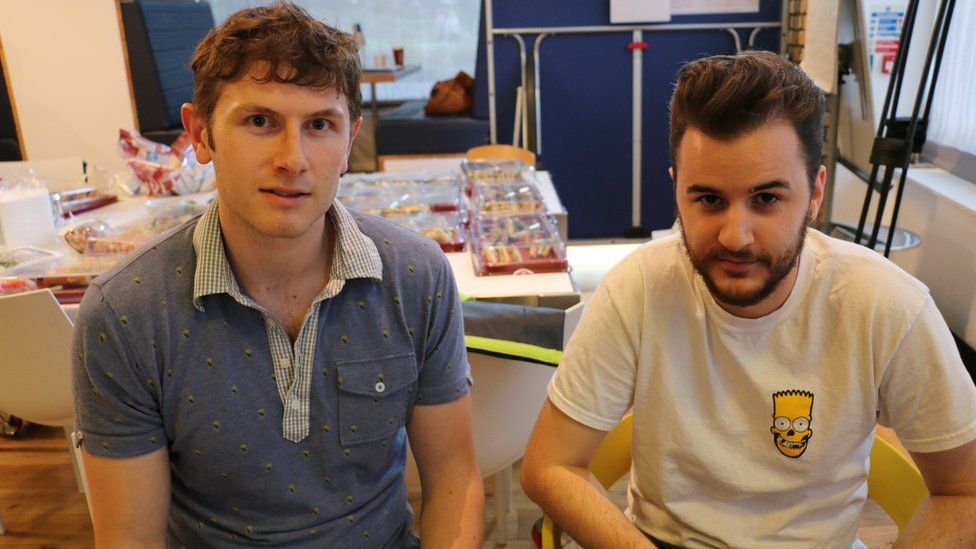 WHO: Patrick McManus who is Good Love and Tom Berman, software designer.

WHAT: Out of Touch - human beings act as triggers for for synths, guitars or drums.

HOW: "We have these seats covered in tin foil," explains Patrick. Wires are attached from the chairs to a computer "so anybody who is sat on that is now a trigger for a synth or a guitar loop or a drum loop".

"I don't have to whack them," he explains. "I just stroke them in a completely plutonic way, either high fives or handshakes."

WILL YOU USE IT AGAIN? "This is just the beginning really, you can do so much more with this in terms of what the audience participation is, you could bring some choreography into this and eventually the audience could have more input." 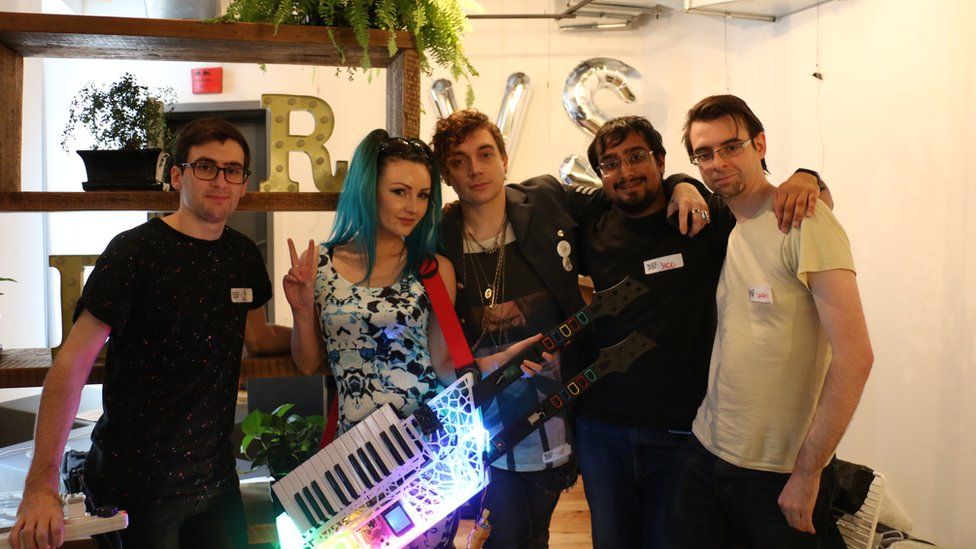 WHO: Ami Carmine and Lee Michael from Them & Us and their team of coders including Sam Wray, Sidd Vadgama and Greig Stewart.

WHAT: Blade, a chiptune keytar.

HOW: "It uses a Game Boy, two Guitar Hero necks, a wireless midi-keyboard all strapped together in a 3D-printed case," explains coder Sam. "It creates a chiptune synthesiser that you can wear like a keytar.

"It's mad as it's kind of the stuff you had at home when you were a kid," says Lee from Them and Us. "The fact that you have two necks on the end of a keyboard, two Game Boys but when you look at it as an overall piece, it is really coherent, it's wicked."

WILL YOU USE IT AGAIN? "Yeah we were talking about this when they were building it," says Lee. "It is one thing to have this unique piece, all being well and it's travel worthy and we can take it further, with the guys consent then that would be awesome."