Jeremy Corbyn: Young people have to be heard - BBC Newsbeat

Jeremy Corbyn: Young people have to be heard 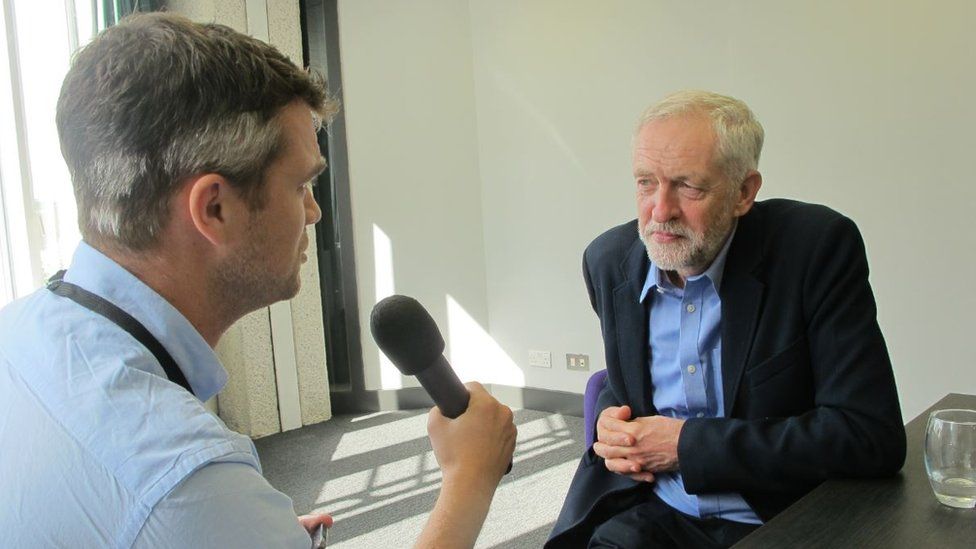 He was once a rank outsider, now Jeremy Corbyn has got the top job in the Labour Party, and he got it by a mile.

The 66-year-old has spent all of his political career as an outsider in the party, and now he has a shot at being the next Prime Minister.

He was swamped with cameras when his victory was announced at Westminster.

GD: "How do you feel today, how did you feel when you got that result?"

JC: "Quite incredible. I was sort of thinking of all the things I've done in my life, all the ideas and all the opportunities that are there.

"This is a campaign about hope, about inclusion, about democracy, about opportunities for young people.

"The central point is that we change Labour party policy so we don't end up penalising people for getting educated, leaving young people with massive debts. And raising the minimum wage to £10 (is one of my campaign points) so they have some kind of chance in life." 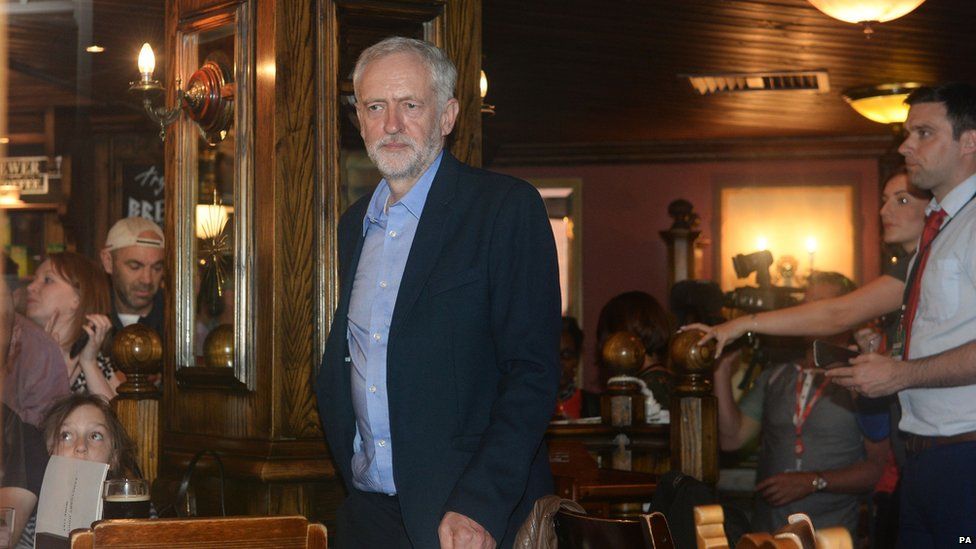 Image caption Jeremy Corbyn might not drink alcohol, but the first stop to celebrate his Labour leadership was the pub

GD: "You've talked about changing politics, can you give some concrete examples about what we're going to notice about a Corbyn leadership that is different to what has gone before?"

JC: "I don't respond in any way to personal abuse that is thrown at me.

"I don't make personal abuse against anybody, I don't mind personal remarks. I believe in politics and I keep it political. Secondly you will find, I am going to try and conduct PMQs (Prime Minister's Questions) with a little less theatre and a lot more substance."

Here's what you need to know about the new Labour leader.

"Why do a million people use food banks, for example? Why are so many people still homeless? Why are there so many Graduates who can't get jobs?

"Those are the kind of questions that need to be put and to influence Government policy in that way." 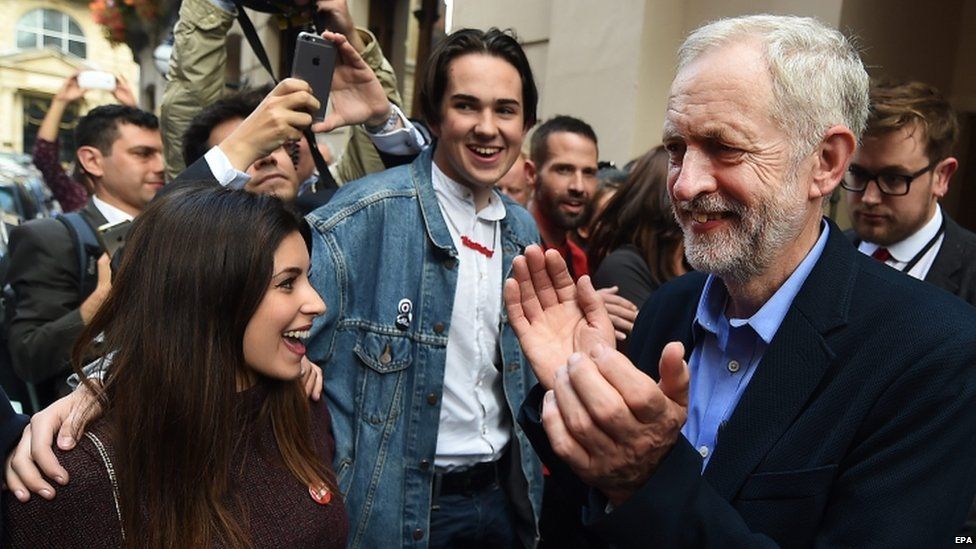 GD: Just on PMQs there are reports that you will sit out some sessions and put other MPs at the dispatch box, can you confirm that's going to happen?

JC: "I have been thinking about this, about how we might change the way questions are done because we have 232 Labour MPs; they have all got brains, they are all intelligent, they are all talented, they all have ideas… they should all be used. So we will share it out a bit so other MPs also ask questions. I haven't quite worked out how it's going to be done yet. I have been in touch with the Speakers' office and asked if I can have a discussion with Mr Speaker about this and we will see how it goes.

"I do think the public want to see politicians acting in a different way. What's brought young people into our campaign is that they were written off by political parties but they had never written off politics and what we have is a huge number of young people, very enthusiastic and brimming with ideas. Those ideas have got to be heard."

GD: On that question I asked, it's a yes?

JC: I'll do my best on this. It's got to be worked through to see how that system works.

GD: "You've talked of the need for unity. The problem is that lots of MPs don't support you and senior MPs won't serve [under you]? How will you present a united front?"

JC: "Nearly 500,000 people took part in this election. I was elected with 60% of the vote. Therefore there's quite a big mandate here.

"The Parliamentary Labour Party is a crucial and very important part of the Labour party but it is not the entirety of the Labour Party. And I hope Labour MPs will recognise that members of the party and the people that elected them will expect them to do their best in Parliament to represent all the best traditions of our party and our movement. 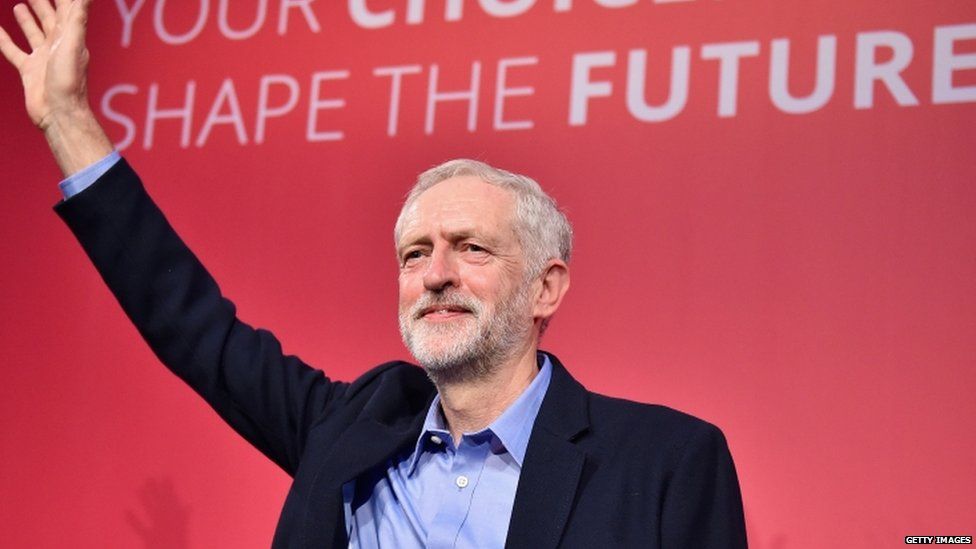 "They've all got a voice, all get a view. But it's also about how we operate outside parliament: the regional policy conferences we hold; the democracy in the party; the involvement in the party; the discussions and debates with young people.

"I'm very enthusiastic and very excited about it and and I'll spend a lot of time campaigning all over Britain: Scotland, Wales, South, South West - all over Britain as much as I can because we've got to build this party up as a community party, a community-based organisation and a community force. And it already is working."

GD: "Your appeal to lots of young people - is that you're straight-talking. Do you absolutely categorically intend to serve all the way to 2020?"

"Somebody very kindly said at a public meeting in Islington on Thursday: 'Jeremy was reluctant to take this position on at the very beginning and the best leaders are those that assume the position with reluctance because they do it best.'"

Jeremy Corbyn has made it clear he wants to do things differently as Leader of the Opposition and it looks like that also includes his media strategy.

In his first broadcast interview as Labour leader he chose to speak to BBC Radio 1 Newsbeat. His campaign team say he was keen to make it a priority to communicate with younger voters.

For a man who'd just been handed one of the most demanding jobs in politics he looked incredibly relaxed.

As he sat in a quiet room away from the television cameras he told me: "This is a campaign about hope, about inclusion, about democracy, about opportunities for young people.

"The central point is that we change Labour party policy so we don't end up penalising people for getting educated, leaving young people with massive debts."

He also told me he believed young people had been "written off" by political parties.